Still going, through the storm

How people in Honduras are surviving the impact of back-to-back hurricanes. Honduras was hit by back-to-back major hurricanes, Iota and Eta, in November 2020. The high winds and heavy rains compounded an already fragile humanitarian situation. 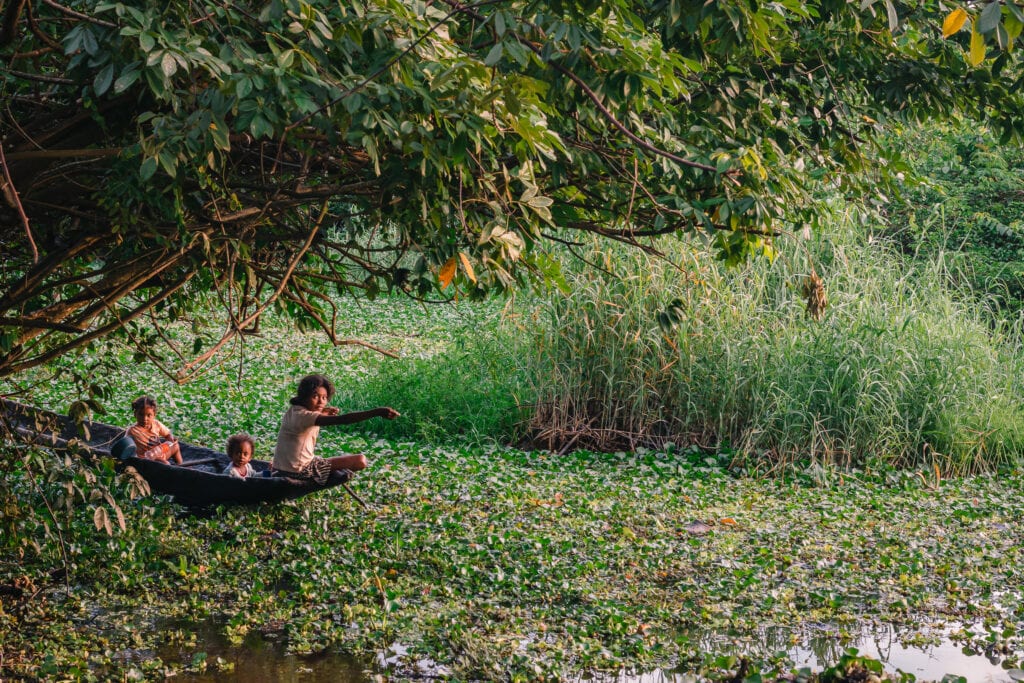 Children fish from a small wooden boat in a water canal in a community in the municipality of Villeda Morales.

The municipality of Villeda Morales is home to the indigenous Miskito community, who make a living from fishing and rearing livestock. This population lives in an area of nearly 600 square kilometres, in villages reachable only by a maze of streams, rivers, lagoons and mangrove canals. 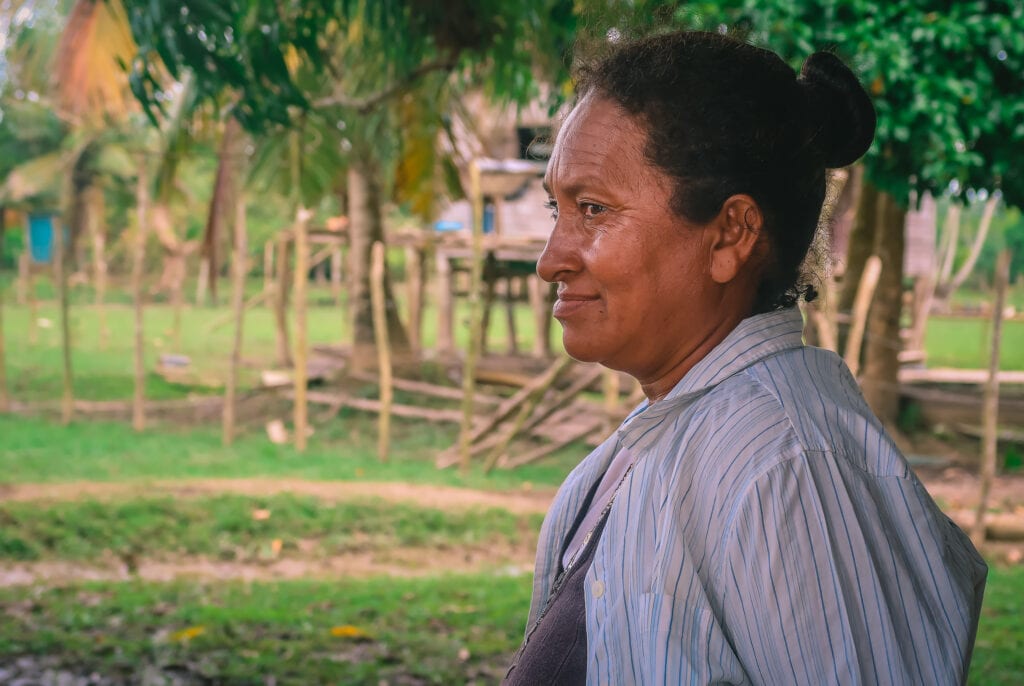 Felicia, 52, stands in front of her house in the community of Rancho Escondido, situated on the Coco Segovia River.

The hurricanes caused canals and rivers to overflow, flooding entire communities in Gracias a Dios. ‘Everything filled up with water and we spent more than a month walking with our feet in the water,’ Felicia remembers. ‘We lost our animals, our cows and our crops. It was bad. Extremely bad.’ Two months later, remote communities just like Felicia’s are still feeling the impact of those floods, as well as the damage from the strong winds. 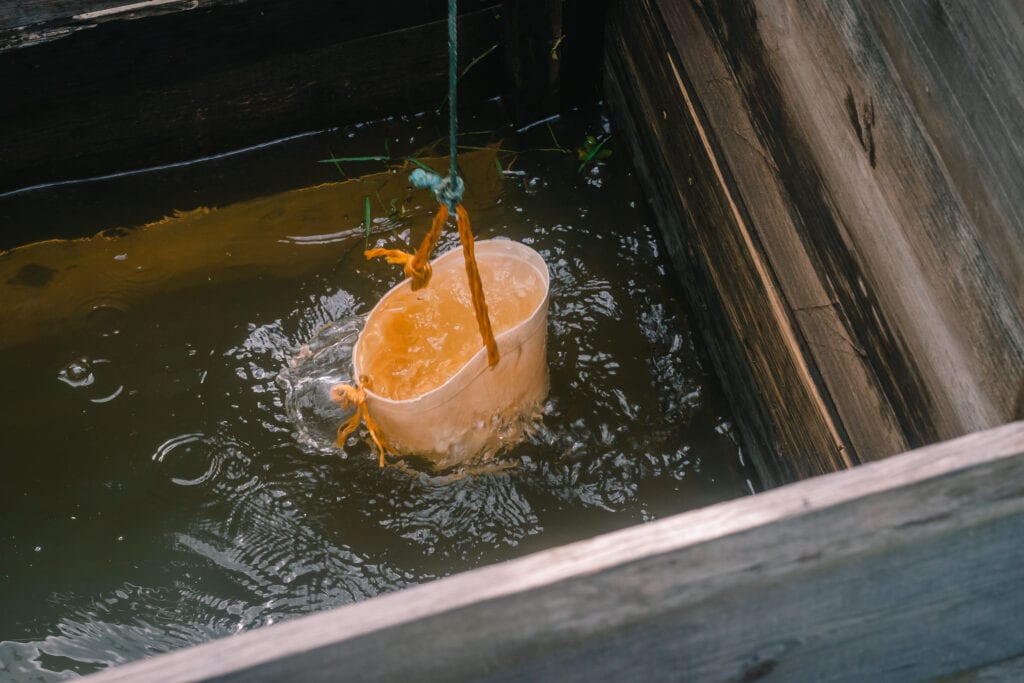 Water is pulled from a community well in the municipality of Villeda Morales.

Flooding caused by the hurricanes exacerbated an already ongoing problem: the lack of potable water. Flood waters entered the wells, mixing canal water contaminated with waste and rubbish with rainwater that was intended for drinking. In many communities, rainwater is the only source of drinking water; many people drink it ‘raw,’ without adding chlorine or boiling it first. 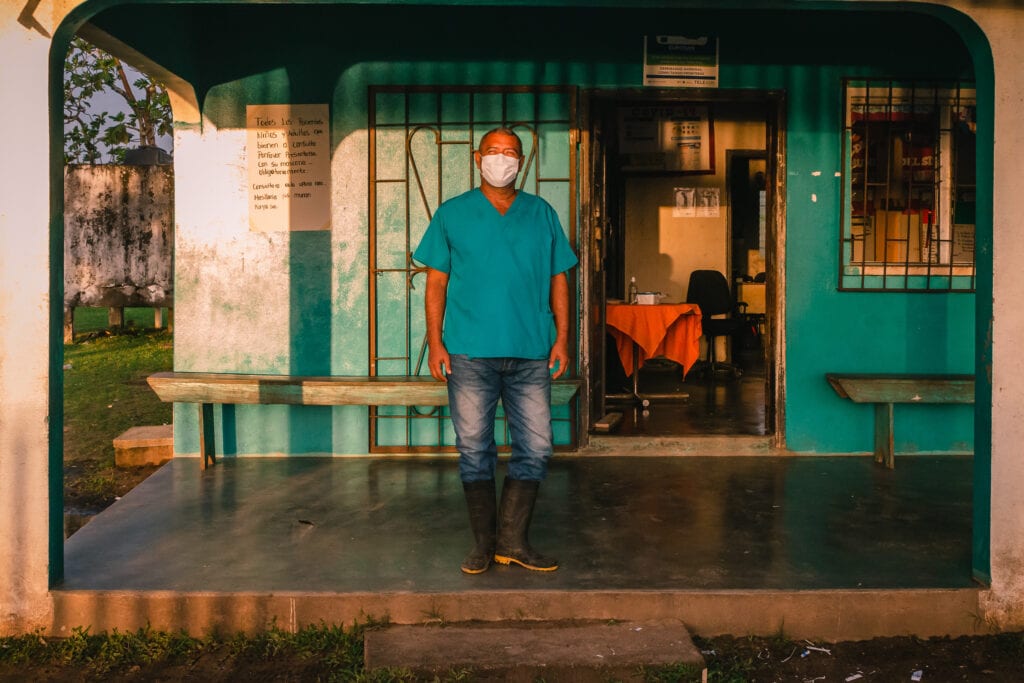 Dr Rigoberto Savala stands in front a health clinic in the municipality of Villeda Morales.

Unsafe drinking water is the main cause of many of the illnesses that Dr Savala sees in his clinic. Those most vulnerable are children under the age of five, who often come in with sicknesses like diarrhoea. There has also been an increase in malaria cases and skin diseases seen at the clinic, the result of stagnant water since the hurricanes in November 2020. 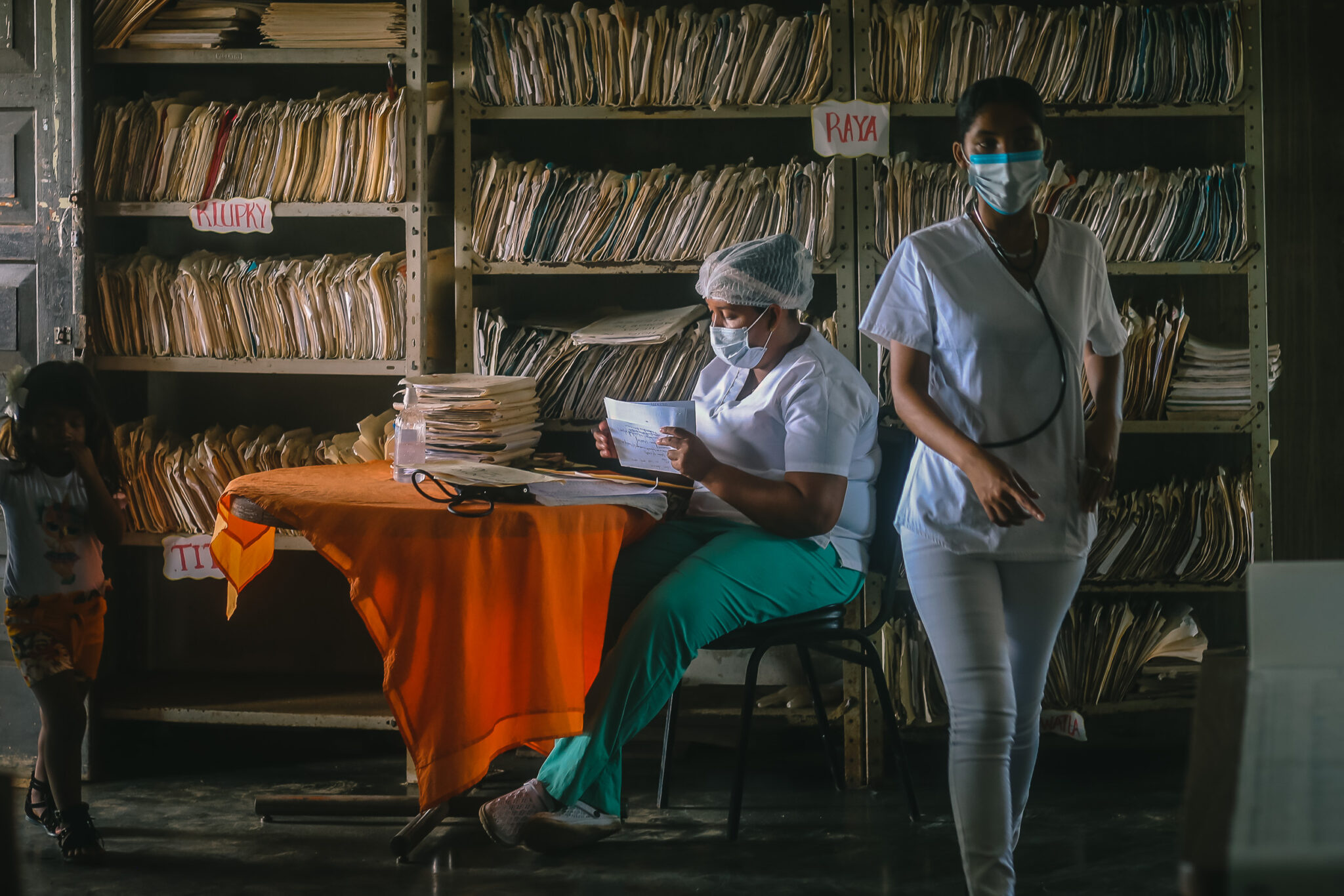 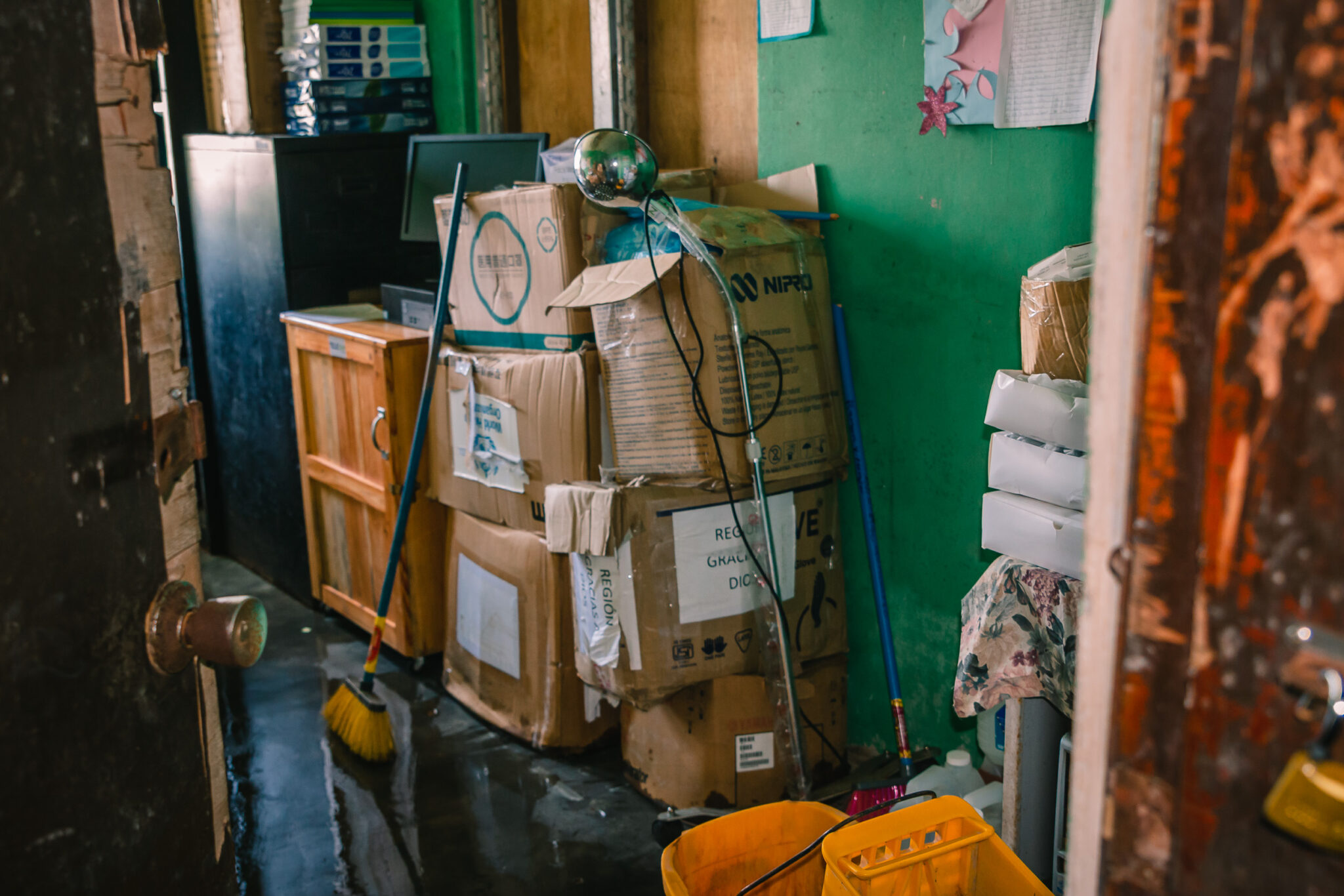 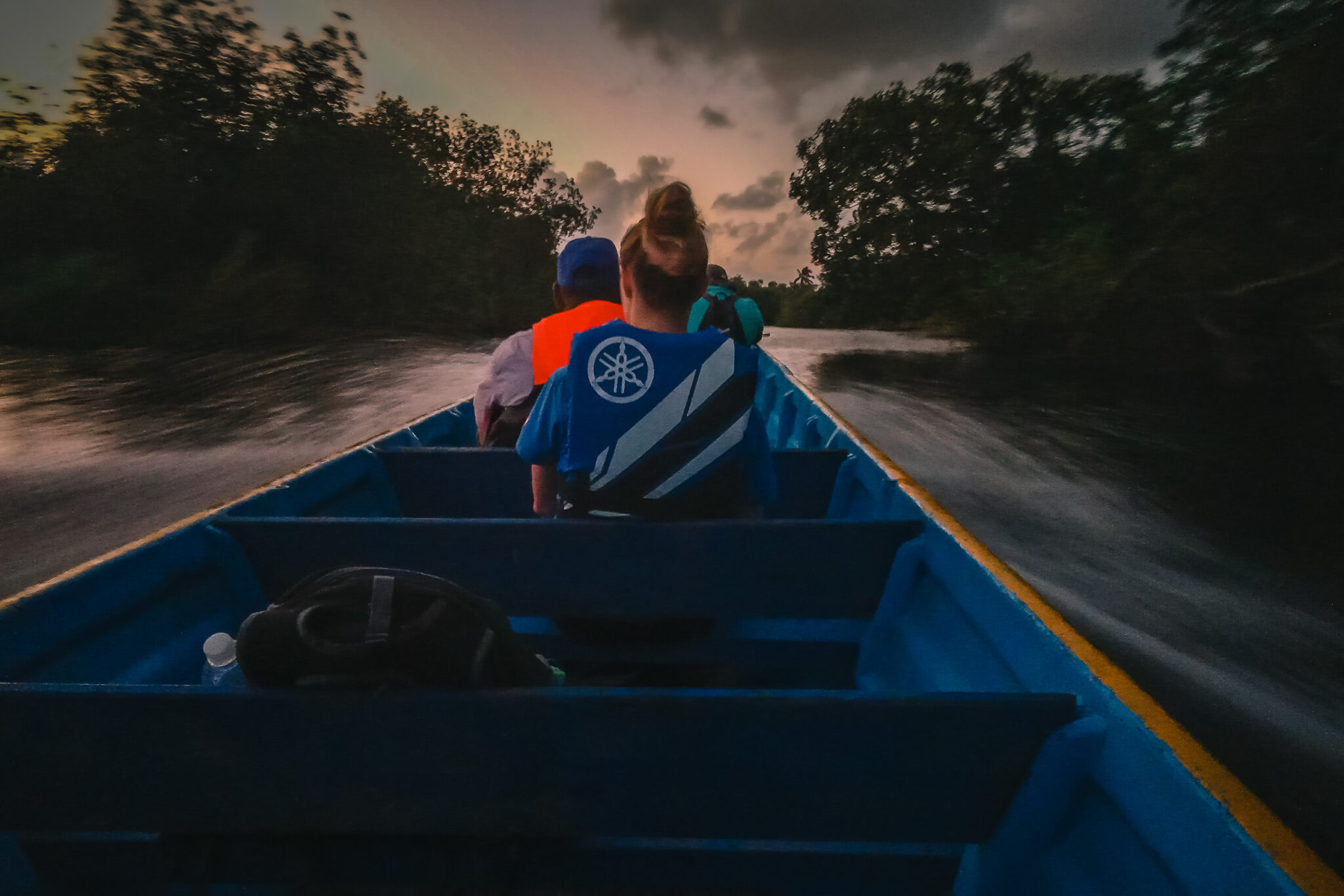 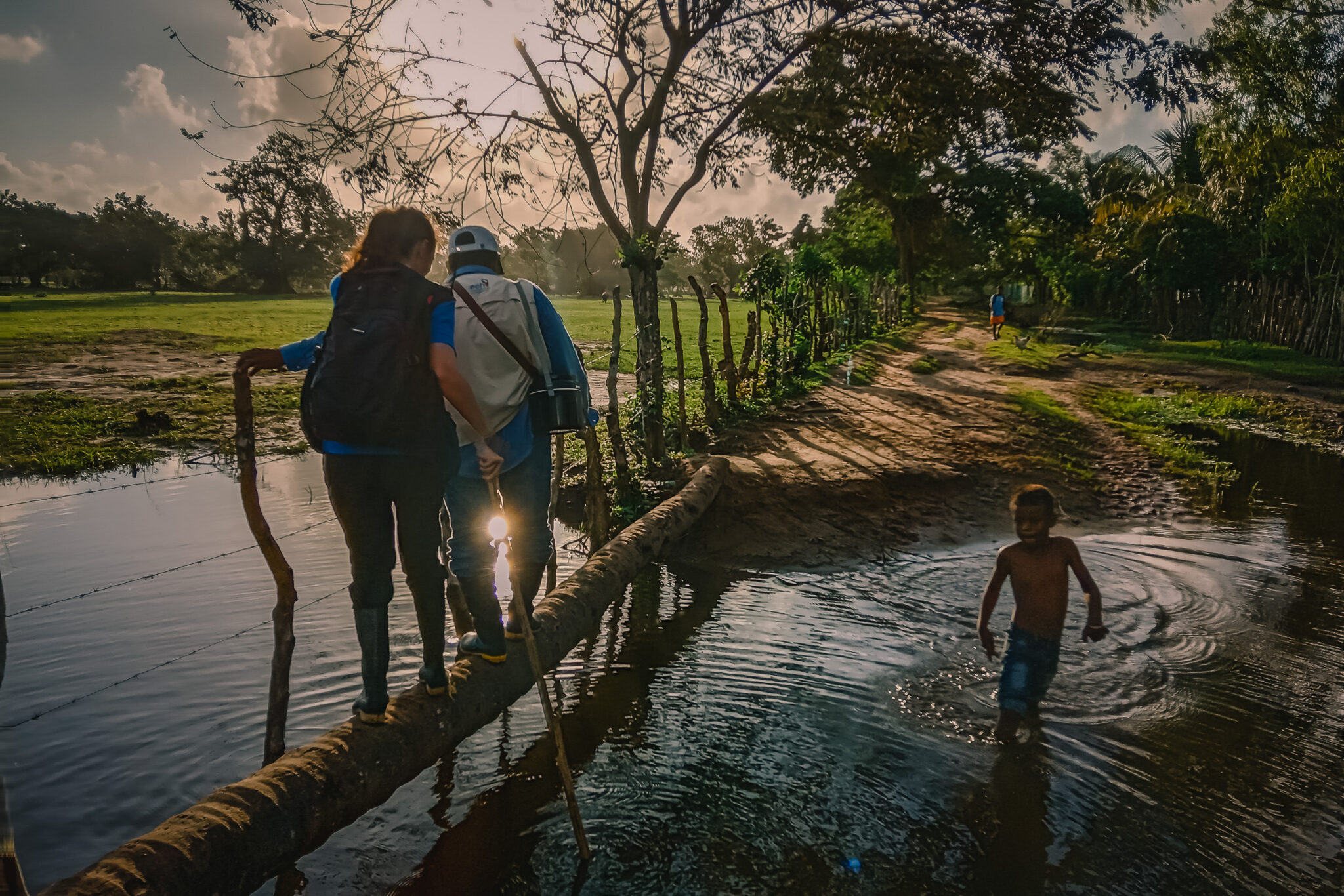 The team spent several days meeting with the local emergency committee to assess the best way to reach Wankiawala. Access by sea, the fastest and most direct route, was ruled out almost immediately because of the risks posed by the weather and open sea. This alternative but longer route – beginning first with a journey by boat through the lagoon at 4:30 a.m., and later continuing on foot when the canals and riverways became too shallow – was the next best option. 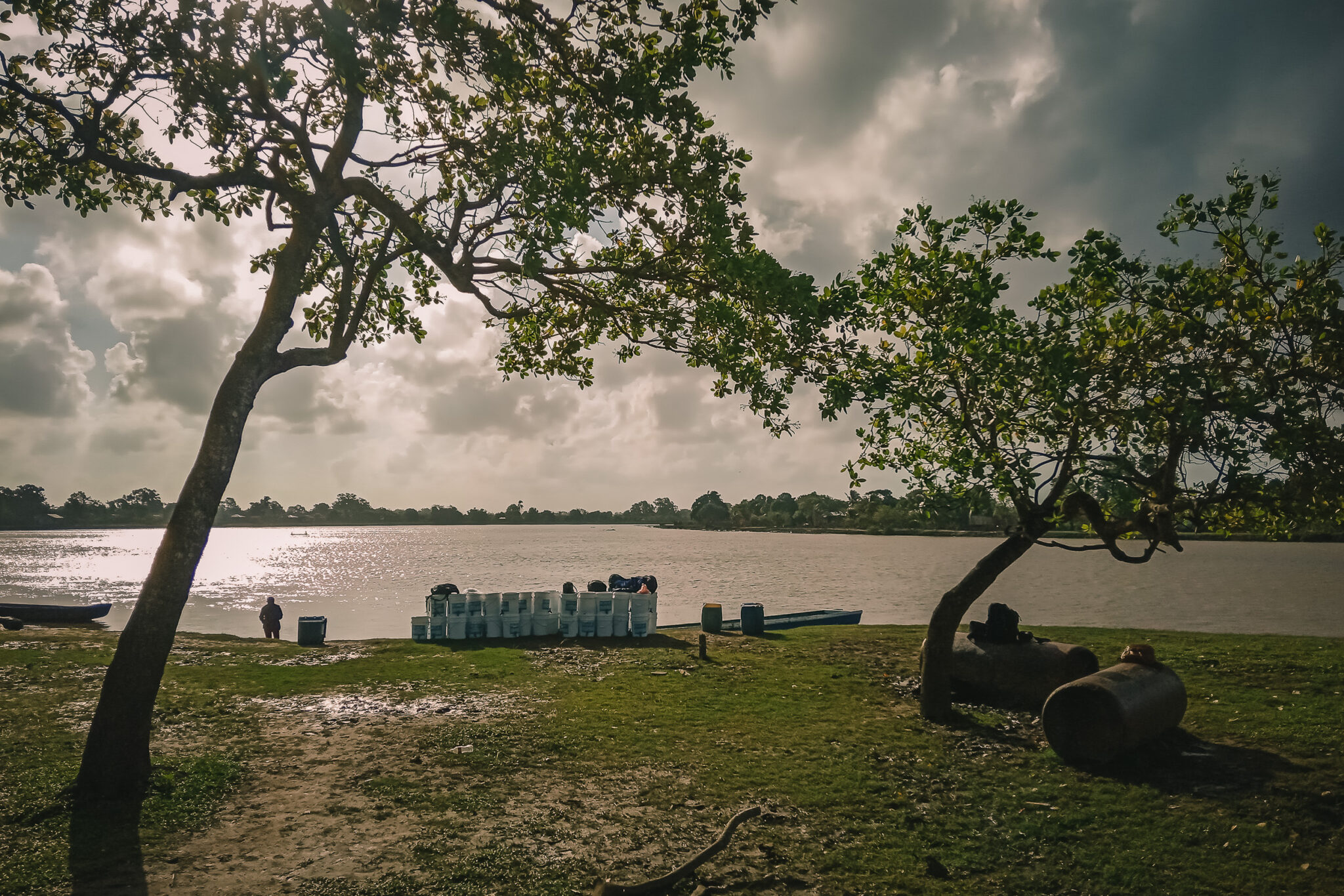 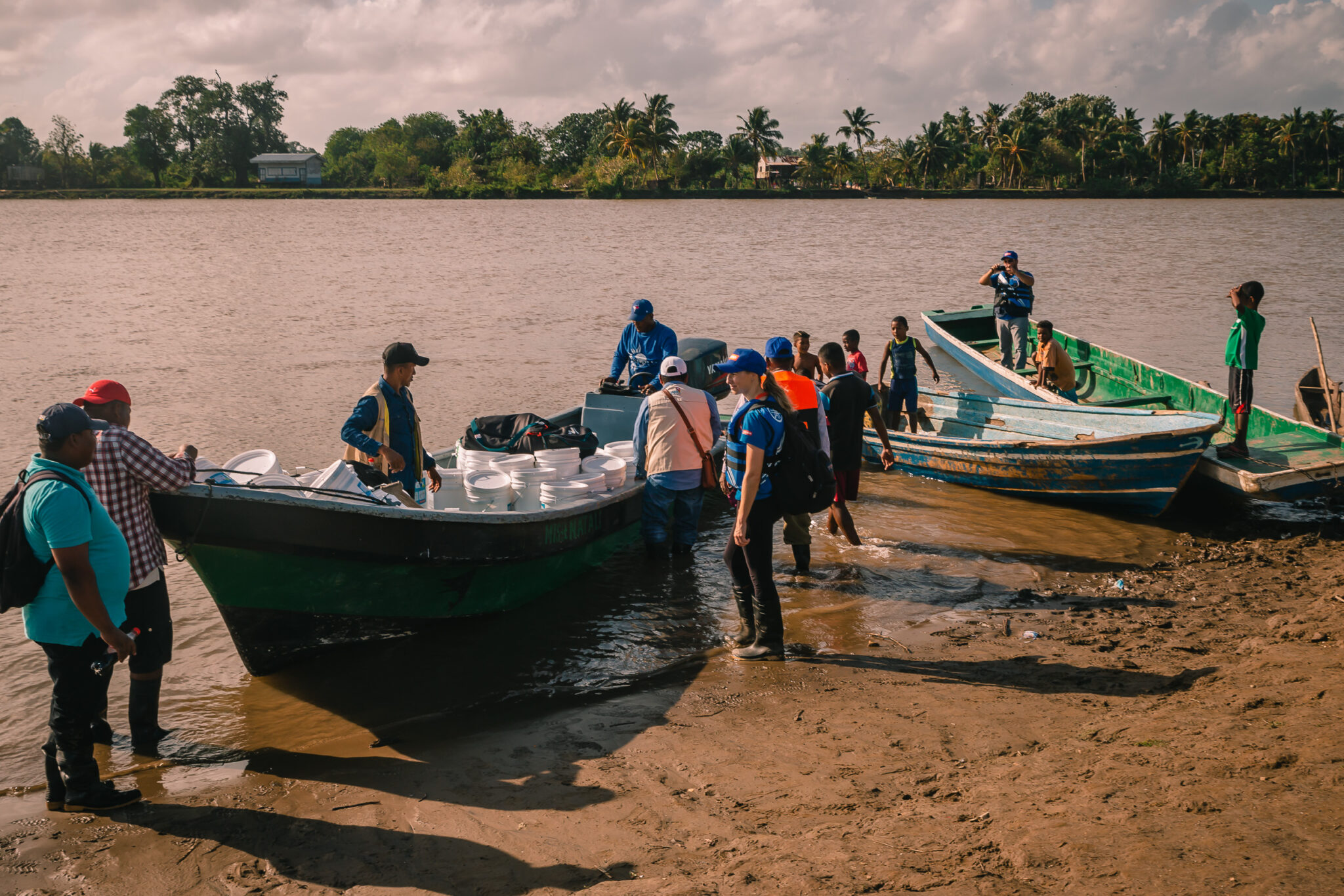 Hygiene kits like these contain materials such as soap and chlorine, which help prevent the spread of waterborne illnesses, as well as essential items like toothbrushes, toothpaste, and feminine hygiene products. 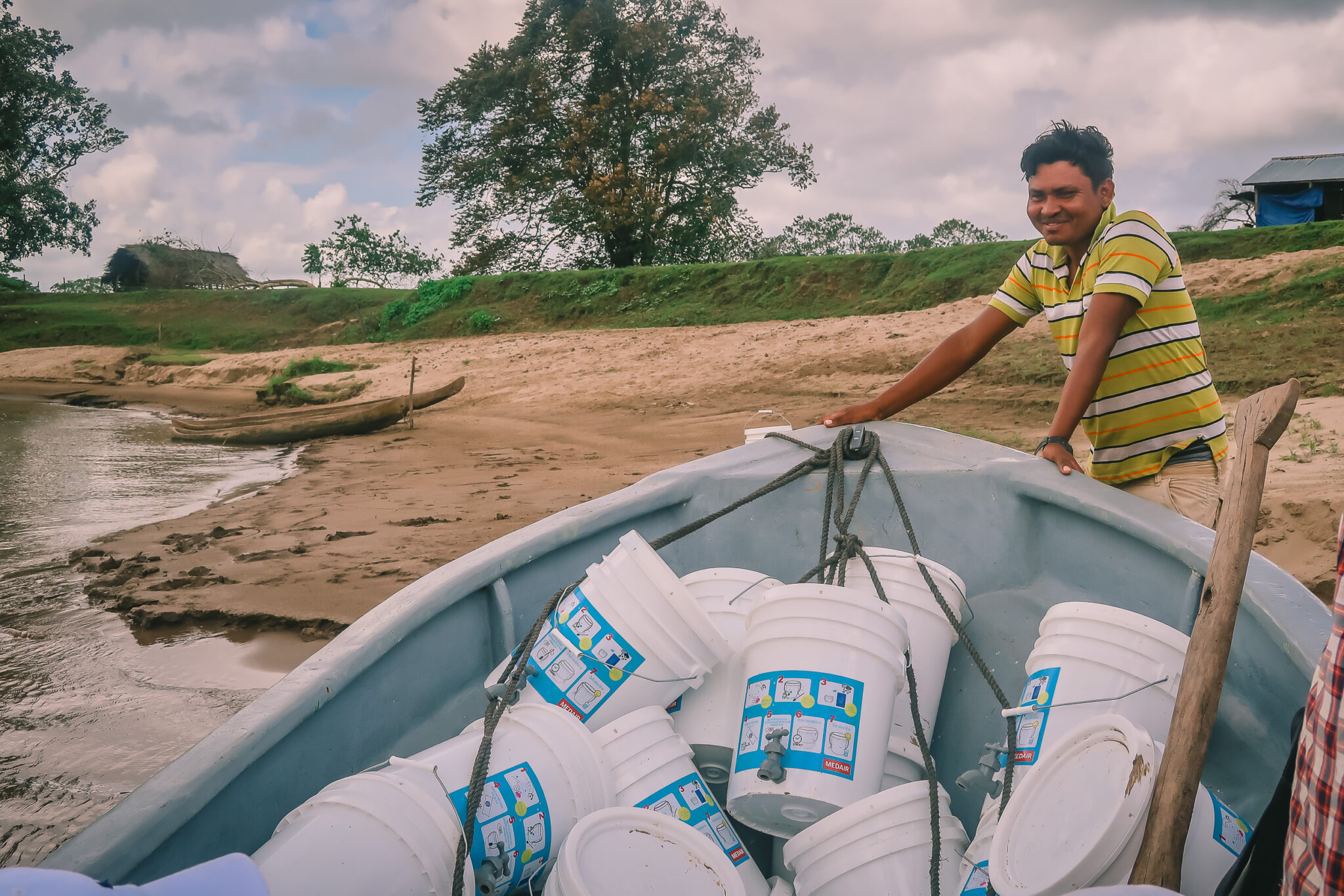 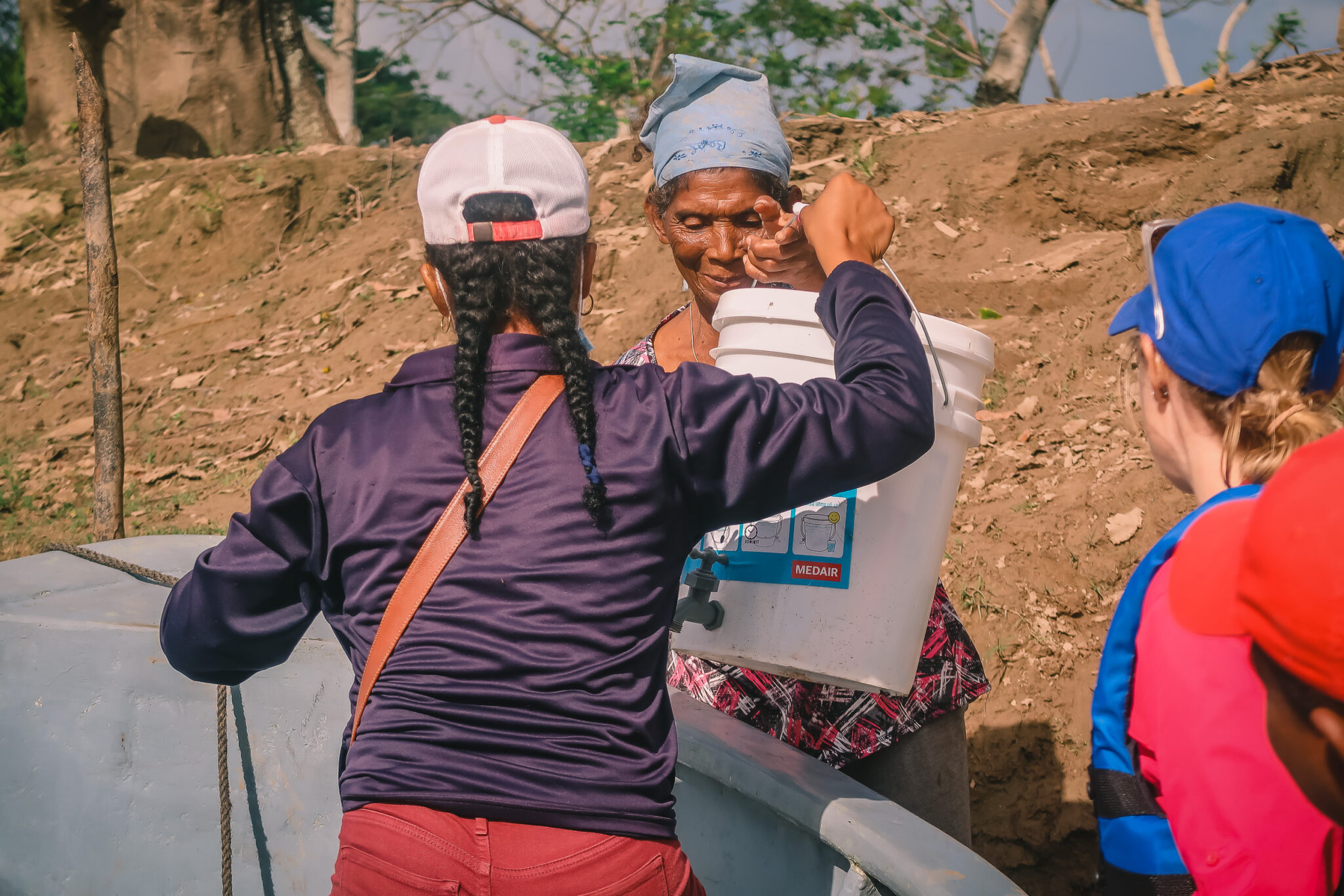 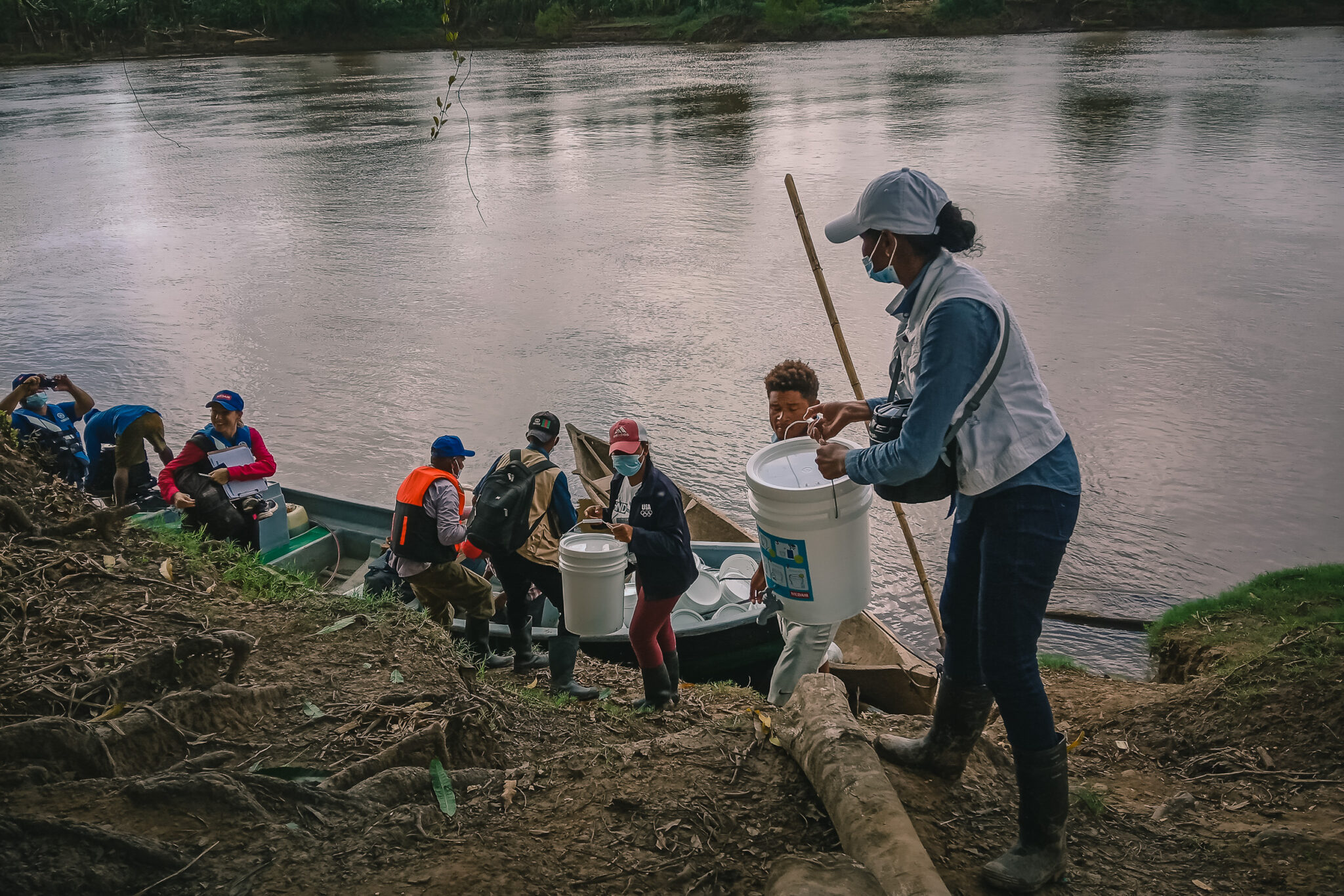 As these boats stop at houses situated along the river, the distribution team calls members of the community registered for assistance and distributes the kits directly from the boat. Medair staff deliver training on health and hygiene, COVID-19 and chlorination of water before the boat moves to the next community.

Because of the remoteness and distance between the houses here, the distributions are different to those carried out in other parts of the world where Medair works – but accuracy, process, attention to detail, and our needs-based approach remains the same. 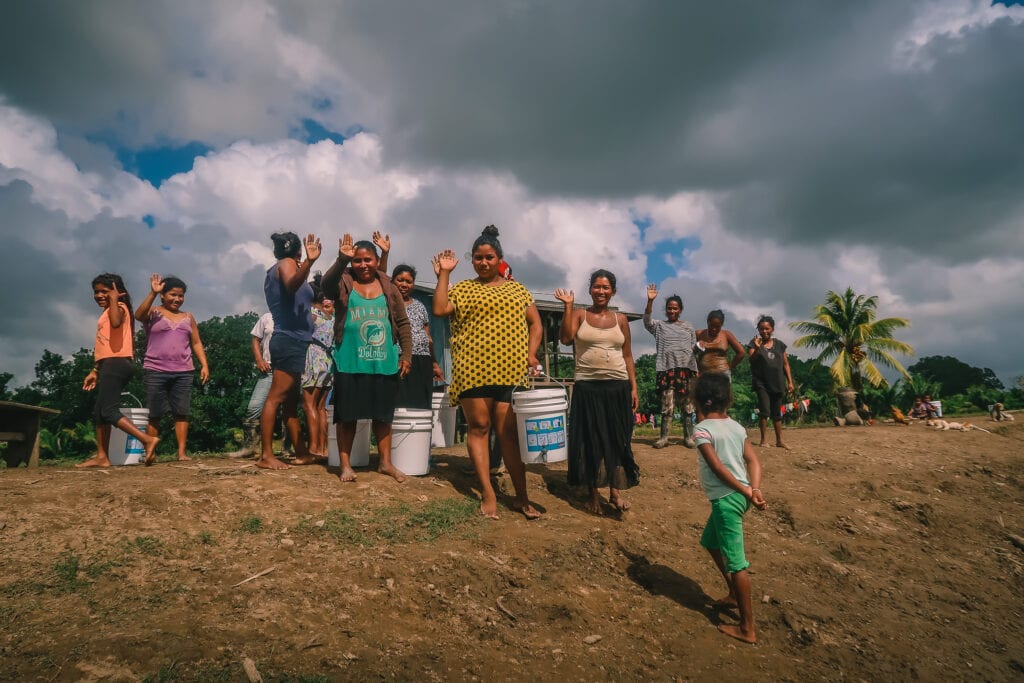 People standing on the bank of the Coco Segovia River and wave as the Global Emergency Response Team departs by boat following a distribution.

Medair’s intervention in Honduras – the distribution of hygiene kits, the rehabilitation of damaged health centres and schools, and the improvement of quantity and quality water – will improve the health conditions of the population in the long term. Yosleny, a resident of Villeda Morales municipality, sums up: ‘People’s health should be the priority, always.’ Our aim in Honduras – as in all the countries where we work – is to put people’s health first.

You can support families still feeling the effects of Hurricanes Iota and Eta. Find out how.

Medair services in Honduras are funded by Swiss Solidarity and private donors.