“We don’t say no to anyone” Health care for everyone

Lahj Governorate in south-east Yemen is known for castles and historical monuments. Yemen, it’s also known as the site of an intense four-month conflict in 2015.

For Fatima, two years old, Lahj is the only home she’s ever known; this was where her family found safety when the fighting moved to their area of the country. We met Fatima and her mother when they visited one of our mobile health clinics in Lahj.

In Lahj, like other places in Yemen, infrastructure is heavily damaged. Estimates for Yemen are that only 50% of health facilities are functioning and nearly 80 % of the population depends on humanitarian aid. As always, persons with disabilities, women, and children are particularly affected. Despite being heavily impacted by the crisis, Lahj Governorate has welcomed nearly 200,000 people from other areas of the country.

Fatima and her mother live in a camp with approximately 5,500 other people, most of whom are women and children. Medair visits the camp regularly with a ‘health caravan’ to ensure that people can receive medical care and treatment for malnutrition. 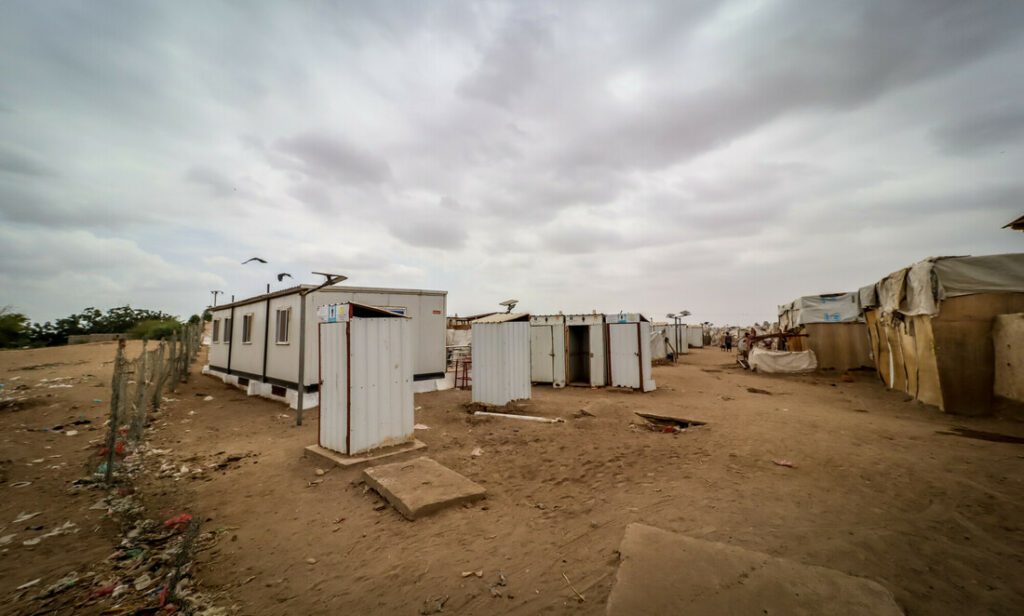 Although camps are safe from ongoing conflict, many people struggle to meet their daily needs.

Dr Rabea is working on one of two busy health caravans. “We don’t just care about the primary health care, but also about providing nutritional treatment for malnourished children,” she says. “Our goal is to make the people as healthy as possible during these hard times. We don’t say no to anyone.”

Fatima’s mother felt she was running out of time for the little girl. “Six weeks ago, I was crying for my baby. Everyone in my family thought that we were going to lose her. She was so weak and thin.”

The lack of nutritious food and clean water was affecting both Fatima and her mother, and finding help was not easy.

“I couldn’t afford to travel to the hospital, and we didn’t have the money to buy medicine. I couldn’t breastfeed her properly as I didn’t eat well for days myself. When my neighbor told me about the caravans, I had a glimmer of hope. Immediately, I took Fatima and went to see them. They have taken great care of her and even came to my village to monitor her situation. Six weeks later, I can’t believe that my girl is walking and standing. I can’t thank them enough. If they were not here, I might now have lost my child”. 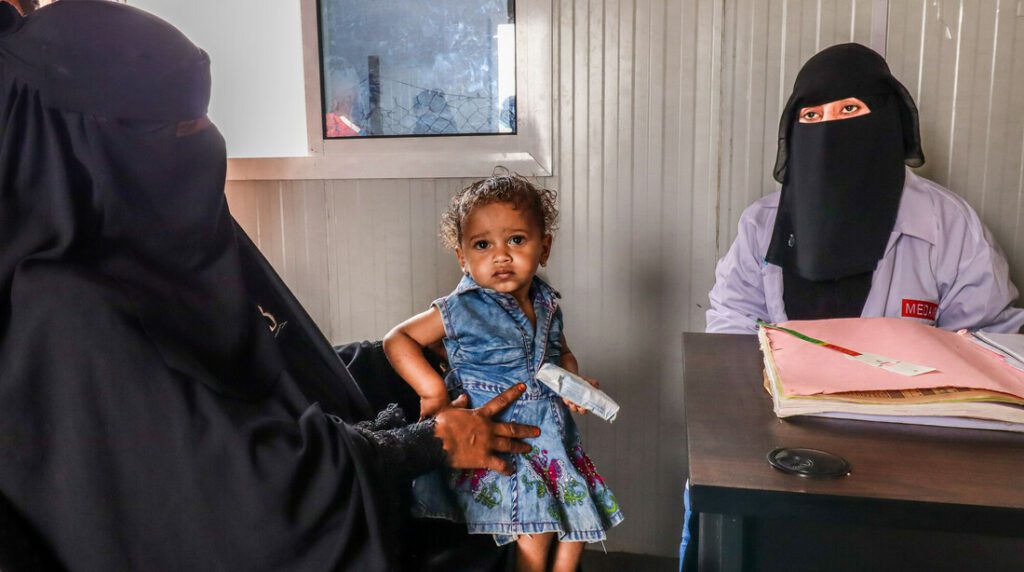 Six weeks after Fatima began receiving treatment for malnutrition from Medair’s mobile clinic, her mother celebrates that the little girl can walk and stand again.

Medair’s mobile clinics provide malnutrition treatment for children under five years of age. Those who have medical complications are referred to general hospitals for specialized care. In the first two months of working in Lahj, nearly 2,500 people visited the mobile caravans. Besides health and nutrition services, Medair provides water, hygiene, and sanitation facilities in Lahj camps. This has included the construction or rehabilitation of latrines, waste pits, and safe drinking water points.

Afaf Abdullah is one of the health care workers in the caravans. She has been displaced from her home herself and is now committed to helping in the camps. “It’s a place where people can feel safe and relaxed because they feel appreciated. We are like them. We have suffered and been displaced during the conflict. I am going to give my best and let them feel seen and let them know they are not alone. I hope that soon the conflict will end, and people will return to their houses and remember us in a good way.” 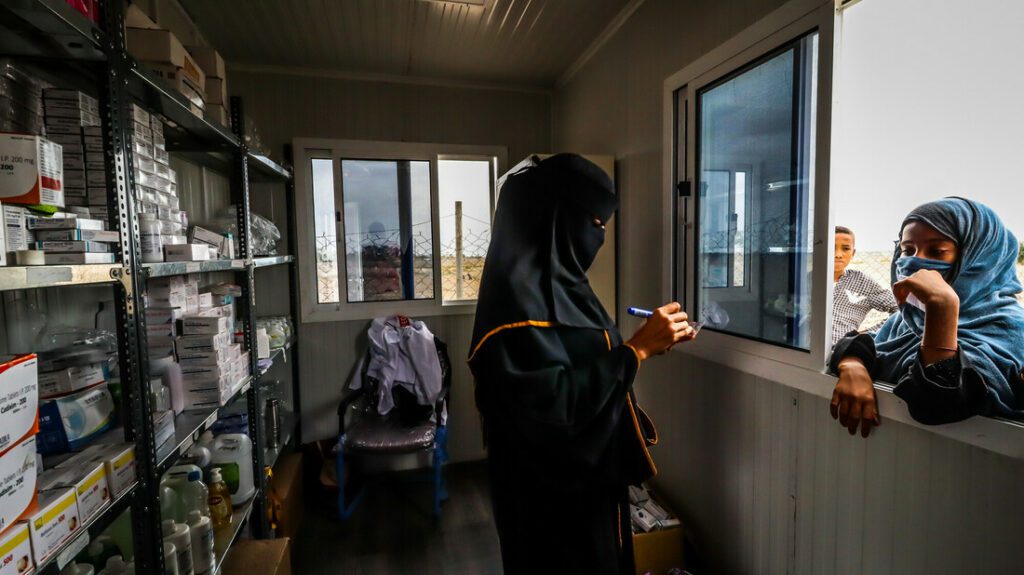 Dr. Marwa explained treatment options and giving out medicines to people from the pharmacy room inside the caravan. 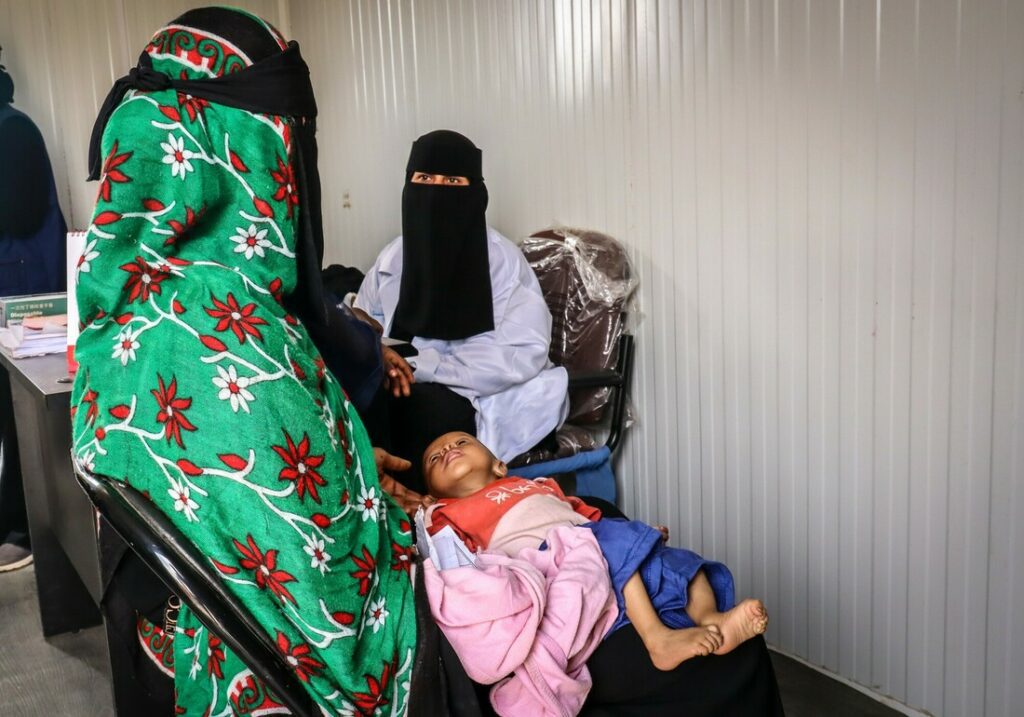 A doctor examines a child for malnutrition in a Medair-supported caravan in Lahj Governorate.

“The caravans play an important role in facilitating the delivery of health and nutrition services for people in the camps. The caravans are a private place for treatment, especially for women and children. We are seeing an increasing number of women coming to caravans,” says Dr. Wafa, Medair’s Health and Nutrition Officer.

As the crisis in Yemen continues, the number of internally displaced people is growing even after seven years. Communities that host the incoming families find it difficult to meet the requirements of their residents and the people in camps. You can help children like Fatima and be supportive of people in Yemen who need to access quality health care free of charge.

Medair services in Yemen are funded by the Swiss Agency for Development and Cooperation, the Yemen Humanitarian Fund – Yemen OCHA, World Vision, the Bureau for Humanitarian Assistance (BHA / USAID), and private donors.