The View from the Ground: Our Tigray crisis response in Sudan

Our Sudan team shares an update from Gadaref State, Sudan.

In November 2020, an escalating conflict in the Tigray region of Ethiopia began forcing tens of thousands of families from their homes. Many sought refuge in neighbouring Sudan, where we recently re-opened a country programme to provide relief to families feeling the lingering effects of conflict. Our team immediately began coordinating with other humanitarian actors and sought access to the areas where the refugees were staying. We’ve since been to the refugee camps and are preparing to provide support to families displaced by this conflict.

This is what we’ve seen.

More than 700 refugees have arrived every day since the start of the conflict. To accommodate their arrival the Government of Sudan has established five refugee camps: three near the border with Ethiopia for new arrivals (Hamdayet, Village 8, and Wad Al Mahi) and two long-term camps, called Um Raquba and Tunaydbah. Arrivals are transferred from the three border camps to the two long-term camps. Um Raquba reached full capacity (more than 20,500 refugees) on 30 January. With just under 13,500 refugees, there is still room in Tunaydbah to accommodate families seeking safety from the conflict back home. We are focusing our emergency response resources on providing support in Tunaydbah, where the United Nations is forecasting that up to 40,000 refugees could be homed in this rapidly expanding camp.

Many of the Ethiopian refugees our teams have met arrived with little more than the clothes on their back. Some, if they are lucky, have a mobile phone. These displaced families need shelter support, household items like blankets and cooking utensils, and basic hygiene items such as soap and toothbrushes. The need for these items is especially pressing now, as the rainy season is approaching and many will need to make improvements to their shelters in order to survive.

We’ve also seen that there is an urgent need for long-term sanitation facilities such as toilets and hygiene promotion activities to prevent the spread of waterborne diseases. A sustainable water supply is also needed, as the only source for safe drinking water is from inflatable water tanks that water trucks fill multiple times each day. ‘The water quality is good, but water trucking is very expensive,’ says Damon, our Emergency Response Team Lead in Sudan. ‘Alternative solutions must be provided.’

Of particular concern to us at the moment is the need for health and nutrition interventions. ‘The health and nutrition needs are significant in Tunaydbah camp,’ says our Health and Nutrition Advisor for the Sudan programme. ‘Communicable diseases such as malaria, respiratory illnesses, and diarrhoea are rife in the camp, and mental health needs will continue to grow as refugees become more depressed, stressed, and anxious about their current situation.’ Many of the refugees that have been in Sudan for more than three months have run out of the money they fled with and are now surviving on only the basic food resources provided by the World Food Programme. Unfortunately, this is having an impact on young children in the camp: there are now more than 100 children with acute malnutrition. 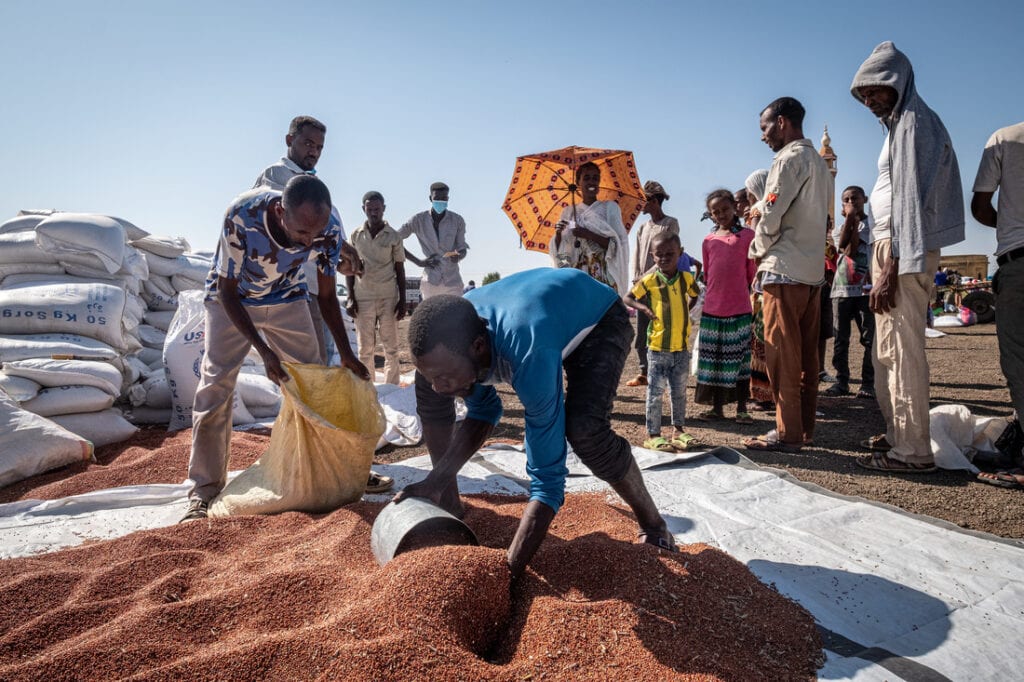 The human impact of this crisis is enormous. Ethiopian families continue to cross the border every day, seeking safety and a place to rest after fleeing from conflict. The hospitality of the Sudanese population in the areas accepting refugees has been incredible. Back in the 1980s, many Tigrayan families sought refuge in this very area when conflict broke out between the Tigrayan regional forces and the central Ethiopian government. Many Tigrayans have family in these areas, so they share relatives and a common language with the host Sudanese population.

The Tigrayan refugees we’ve met come from a variety of backgrounds, and many are highly educated. We are often told that Tigray has very fertile land; even the poorest residents own 10 cows – a mark of wealth and stability. ‘Moving around the Tunaydbah camp and speaking to the refugees, I met engineers, teachers, medical professionals, and business owners,’ says Damon. ‘Everyone is educated and well-resourced. They’ve lost everything.’

Sisters Zedwie and Letay in their shelter in Um Rakuba camp. They fled fighting in Tigray with their mother. They still have family in Tigray. © Medair / Joost Bastmeijer

There is no such things as a simple humanitarian crisis, and this unfortunately is an incredibly complicated one. The situation in Tigray began as an internal crisis, but is quickly drawing in regional actors from across East Africa. ‘We know there remains a large population of Tigrayan civilians in Ethiopia, with various reports that they do not feel safe to run to Sudan,’ says Damon. There are reports from actors such as Amnesty International and Human Rights Watch detailing cases of violence, killing, theft, and vandalism across the Tigray region. We are praying that this does not escalate further, and that a tenable solution is found – for the sake of the thousands of families who have fled the place they call home.

We are doing everything we can to provide urgently needed health, nutrition, and safe water support to the families who have fled the conflict in Tigray.

Medair services in Sudan are funded by Swiss Solidarity, the Centre for Disaster Philanthropy, the Principality of Liechtenstein, and generous private donors.