More than 60 million people around the world are internally displaced, and 6.7 million people of this number are Syrians according to the Internal Displacement Monitoring Centre. After Ukraine, Syria has the most Internally Displaced Persons (IDP).

An internally displaced person is someone who does not cross borders but is forced to leave home in search of safety.

While the situation is difficult for the people who stayed in their homes in Syria, it is extremely challenging for people who had to leave. Many families cannot pay rent, and often six or more families must live together in a one-bedroomed house.

Many families are left with nothing but the clothes they had on to seek refuge. The situation in Syria has become safer. People are returning to their homes, even if the house is only walls with nothing inside. For these families, living in their own homes is better than having to pay rent or live away from their towns.

During a visit by Medair to different areas in Syria, the team talked to different families who shared their experiences of being internally displaced. 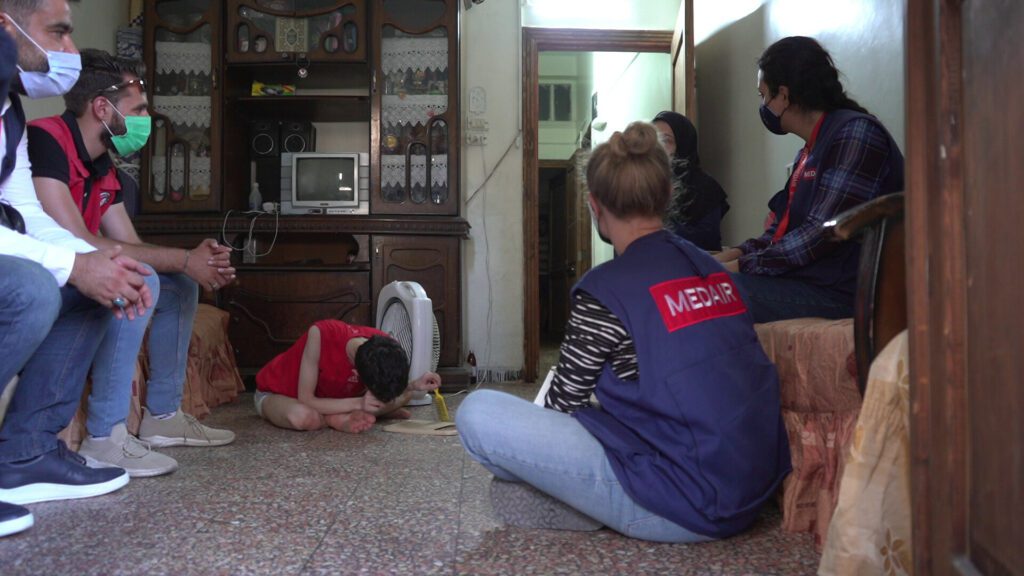 During the visit to Jamileh’s home in Aleppo.

In Aleppo, Jamileh is a mother of three. Khalid has learning and mobility difficulties, and Akbar is autistic. Her older son works as a tailor to provide for the family.

The Medair team enjoyed meeting and speaking with Jamileh. She was welcoming, polite, and happy to be visited in her home. She insisted we translate for our international colleagues saying “Abos Rohek” which roughly translates to “bless your soul”.

The team went up a narrow stairway to the fourth floor. The power was off and the team used their phones’ flashlights, carefully watching their steps on the way up.

Unlike the stairway leading to her apartment, Jamileh’s home was perfectly lit. Everything was clean. The walls were newly painted. Her house was in a very good shape.

We asked Jamileh about her journey during the crisis, and how her home was when she returned.

“During the crisis, me and my children had to leave and seek protection elsewhere in Aleppo. We found a place for us in a mosque with other families.” Jamileh said.

“My two children have disabilities. The situation was hard before the crisis, so being displaced made our lives especially harder. During our time in the mosque, people used to help me take care of my children. I have diabetes and I suffer from rheumatism. It’s hard for me to carry my children.”

“I came back to my home about two years ago. The walls were filled with mould, and it was dark. It was nothing like before we left. There were no doors or windows. My children were always screaming and angry because the smell was unbearable, but we had to come back. I had no other option.”

“Your organisation rehabilitated my apartment, your team installed the doors and windows, they even provided us with a battery and lights. It’s not dark anymore. The smell of mould is gone. My children are not irritated as they used to be.” 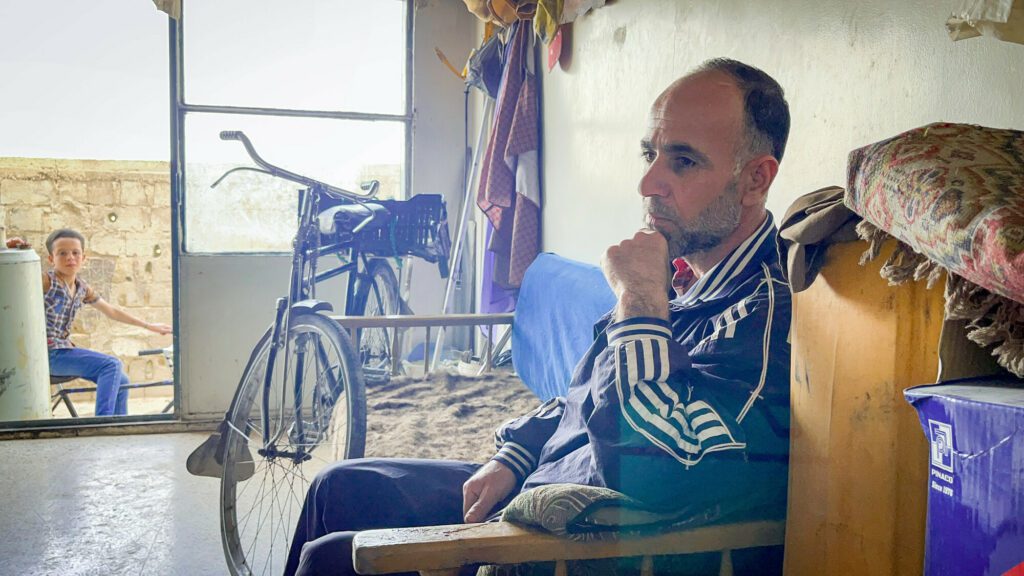 In Rural Damascus, Iyad left his home to live in another governorate with his family during the crisis.

Iyad is a barber, but business isn’t flourishing in his neighbourhood, so he works as an electrician to provide for his family.

“We had to leave our home in Hjeirah immediately after the crisis began. We travelled to Hamah and stayed there until the situation stabilised. Thankfully, we came back.” Iyad said.

“We fixed our home and started from scratch, but still the water in our area was a major problem. There’s no clean water, and we had to set a budget only for buying water from trucks.”

“Your organisation helped my family and others living in this neighbourhood by rehabilitating the water boreholes. It’s less of a burden now since we have water in our faucets. But even with that, we’re still suffering from lack of electricity, which affects the ability of water reaching our house. However, we’re glad we came back.” Iyad told our team. 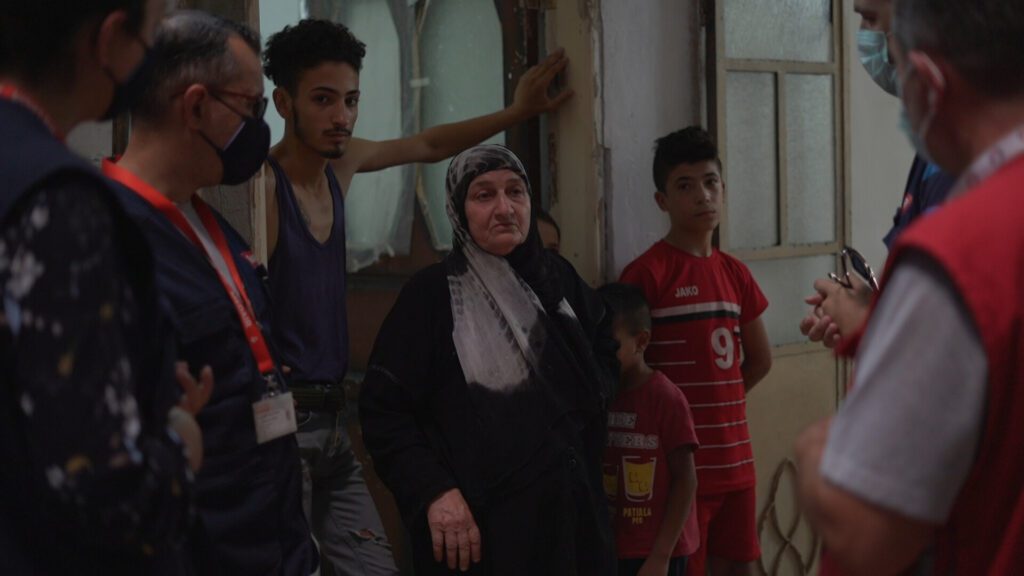 In Deir-ez-Zor, Um Ahmad takes care of four grandchildren. She lost one of her sons during the crisis. The other one works to provide for the family. All the buildings around her house were damaged or even collapsed. Only a few houses in her street were occupied.

“During the siege, there was no food. We had to eat anything, so as not to starve. We ate crusty and mouldy bread and drank the filthy water. There was no access to any medication or health care at all.”

Um Ahmad kept saying “thank God” after every sentence she spoke. “Everything that comes from God is good and merciful, that’s why we kept being hopeful.”

Once the situation stabilised, she and her family returned.

“My family owned this house. I’ve been living here for over 60 years. We had to go back to it.”

Since 2021, more than a hundred thousand internally displaced people are returning to their homes. The number is increasing, which means actions need to be taken to help these families feel like they’re home again.

There is limited access to medical services, and the infrastructure for water and sanitation is damaged. People cannot return to their old jobs and provide for their families. All of this plays a major role in more people returning without suffering the aftermath and going through a crisis after a crisis.

Syrians lived normal lives, leaving for work in the morning, going back to safety and comfort of their homes. During the crisis, families had to leave their homes, friends, not knowing when they will return.

Many families returning home face little or no access to water and sanitation facilities, and often must live in unsafe homes. Many areas are severely damaged and need urgent rehabilitation. 65% of hospitals and 56% of health care centres functioning according to the Humanitarian Needs Overview issued in 2022. Many families have to go to other governorates for medical services.

As families return to their homes, Medair is working to ensure they can live in safe homes, with access to basic water and sanitation services. Find out how you can help too here

In Syria, Medair’s work is made possible by the European Commission’s Civil Protection and Humanitarian Aid Operations, UNOCHA, Swiss Agency of Development and Cooperation (SDC), Swiss Solidarity, SlovakAid and generous private donors like you.