In the six years that Medair has been working in the Middle East region, we’ve met some truly remarkable women. Women who, against the backdrop of ongoing crises in Syria and Iraq, have lost everything.

In the six years that Medair has been working in the Middle East region, we’ve met some truly remarkable women. Women who, against the backdrop of ongoing crises in Syria and Iraq, have lost everything. Yet they remain quietly determined and resolute as they work to piece their lives back together.

Iraq: Samira, the very definition of grace and dignity

When first meeting Samira, the word ‘dignity’ comes to mind. Or perhaps ‘grace’. It’s not just her height and beautiful smile, it is the way she makes people around her feel comfortable and welcomed, even in the middle of a muddy camp in northern Iraq. 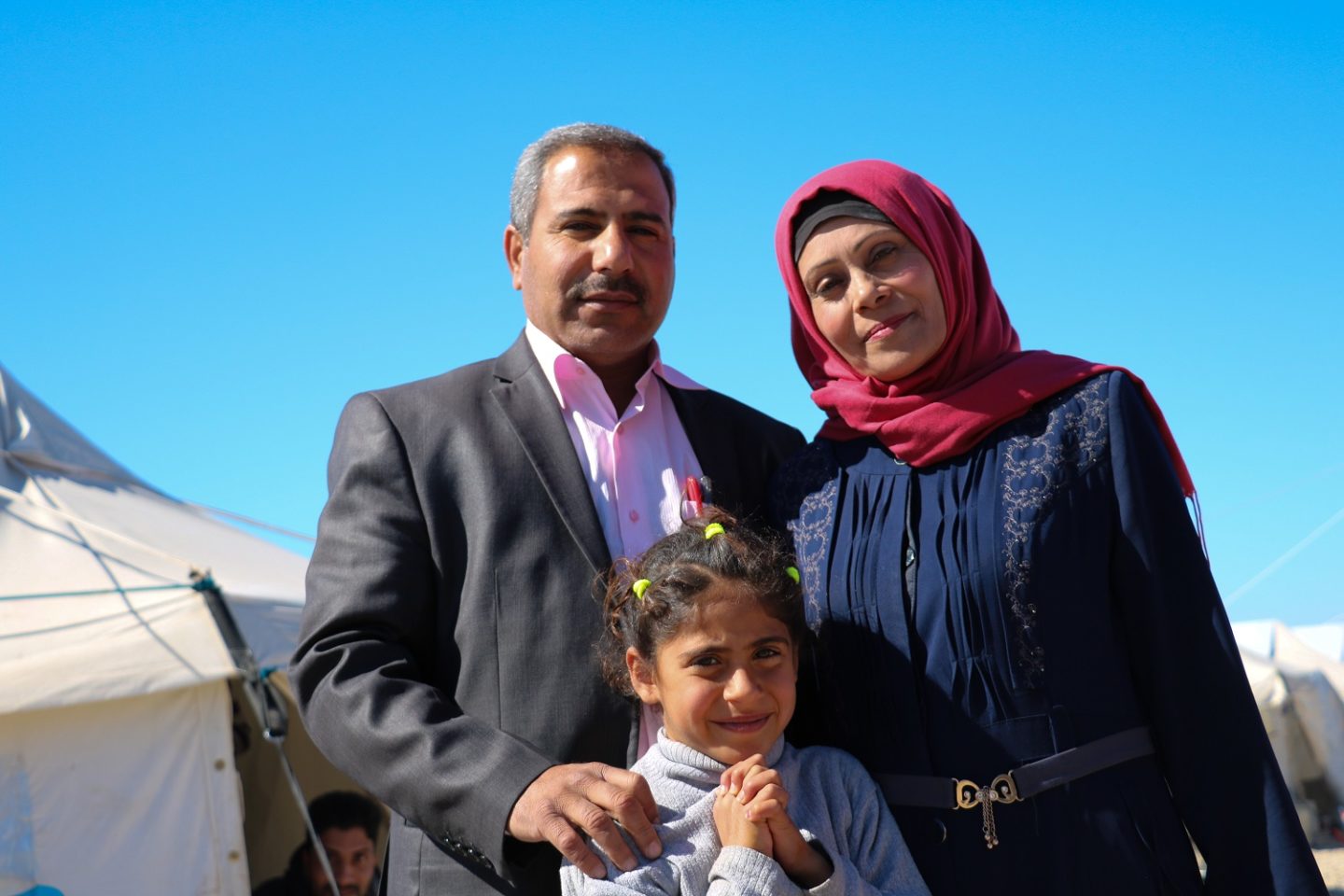 Samira describes her life before 2014 as beautiful. Her husband ran the nearby school in Hawiga and her oldest son was in university. Her garden had fruit trees and she lived close to her extended family. Her house was known as a place where children would gather, and tea and sweets were always ready.

“I was so happy when my son would come home for weekends from university,” remembers Samira. “I loved making sure he had food and clean clothes to take back. I was so proud of him.”

Even though they now live in a tent in Laylan 2 camp, Samira still puts out her best tea and sweets for guests. It’s not the same as it would be in Hawiga; these sweets are purchased from a market in the camp instead of made in her own kitchen, but the neighbourhood children still know they can find treats at Samira’s house and can crawl into her lap anytime. 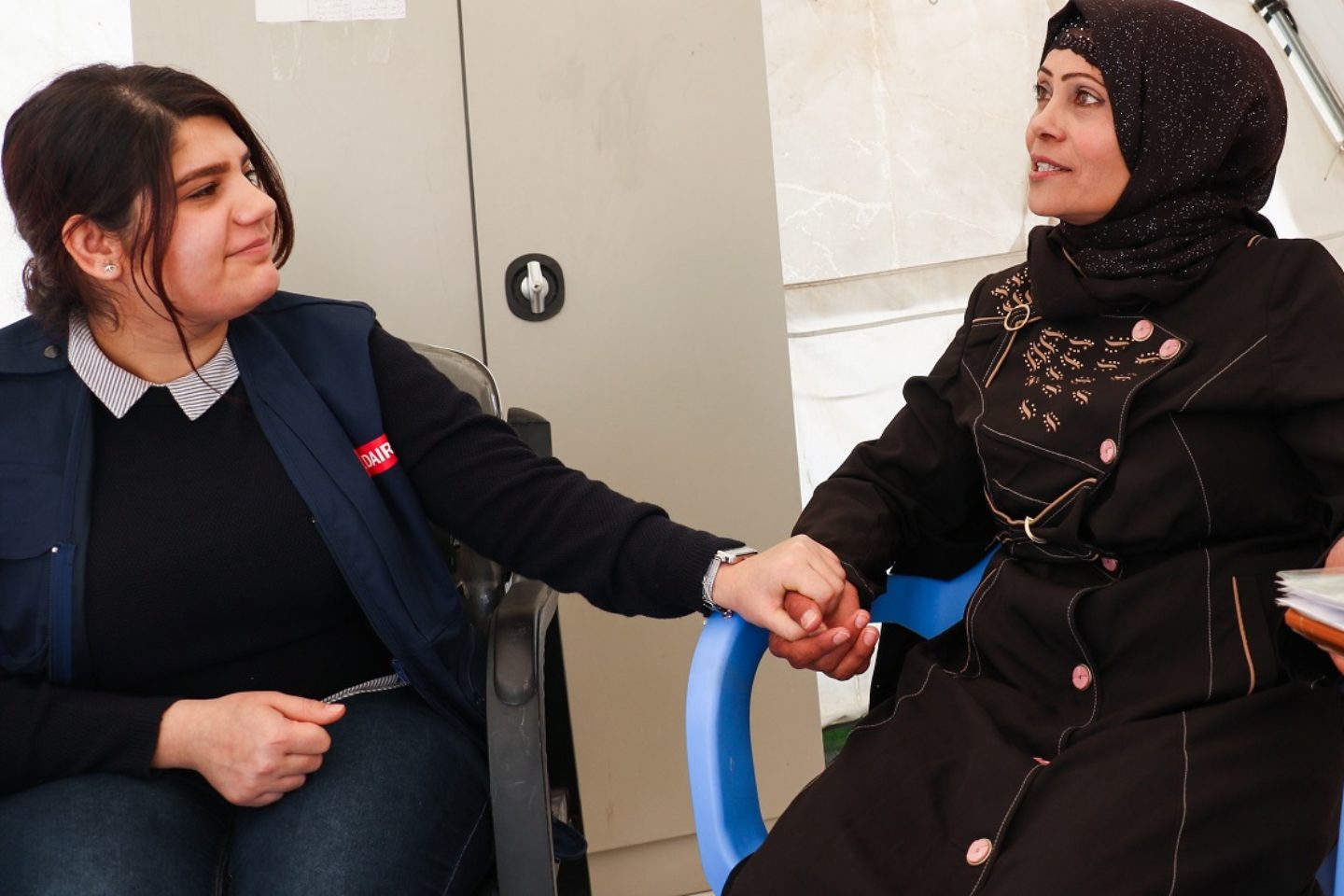 Medair operates a primary health care clinic in Laylan 2 camp, and Samira is a community health volunteer. Each week she attends training on health and hygiene, and visits families in their tents to share messages on the importance of breastfeeding, family planning, handwashing, and disease prevention. 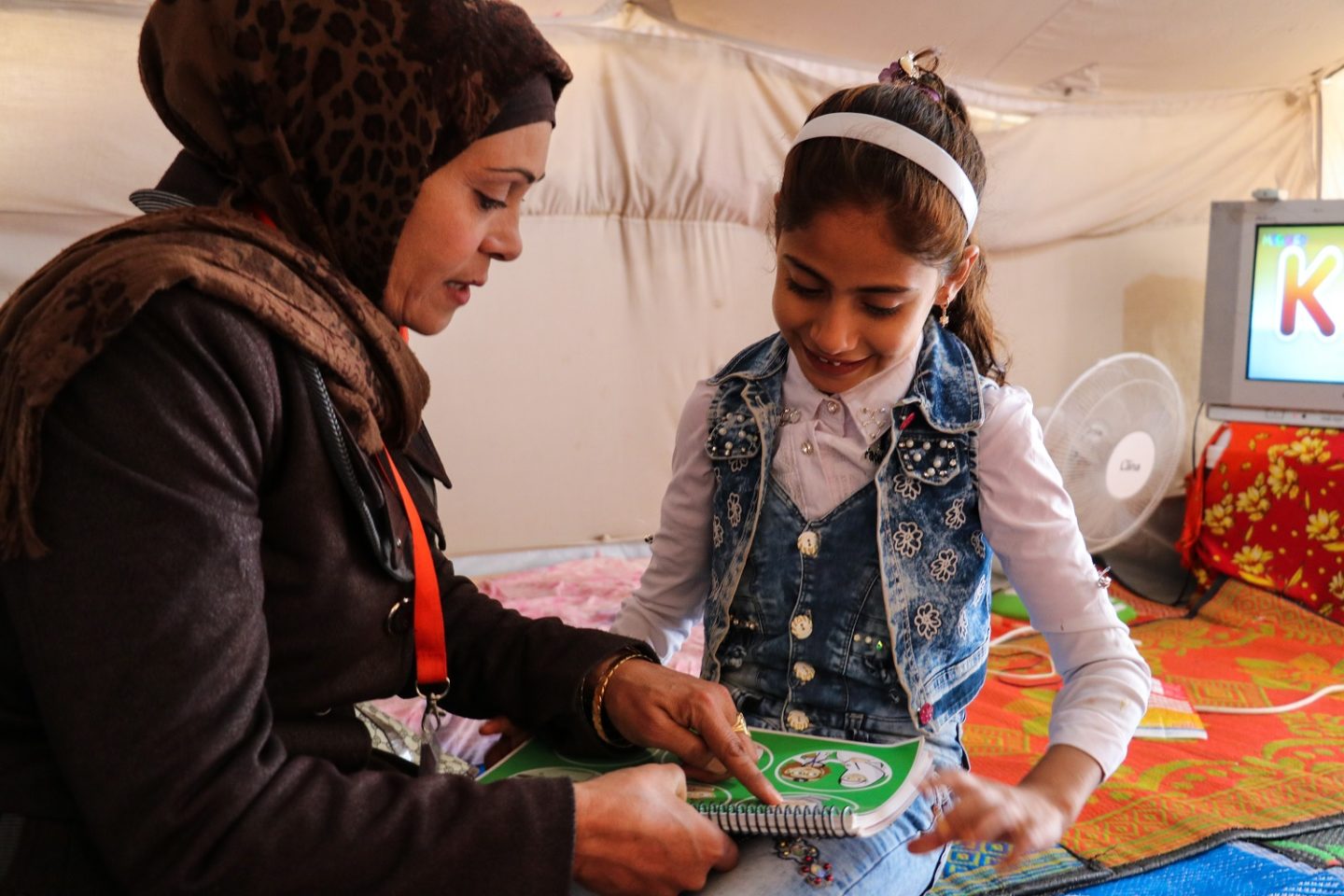 Samira’s daughter Lamia, age 9, wants to follow in her mother’s health care footsteps and proclaims she would like to be a doctor. Samira is happy to hear this news, but her smile fades when she recalls what her young children have experienced while still in Hawiga.

“They have seen too much,” she says. “Twice we tried to escape Hawiga and we were caught and forced to return. My daughter has seen her father being beaten, and her brother also. She begged them not to shoot her father. She was so afraid. Even now she has nightmares and needs to sleep with me.” 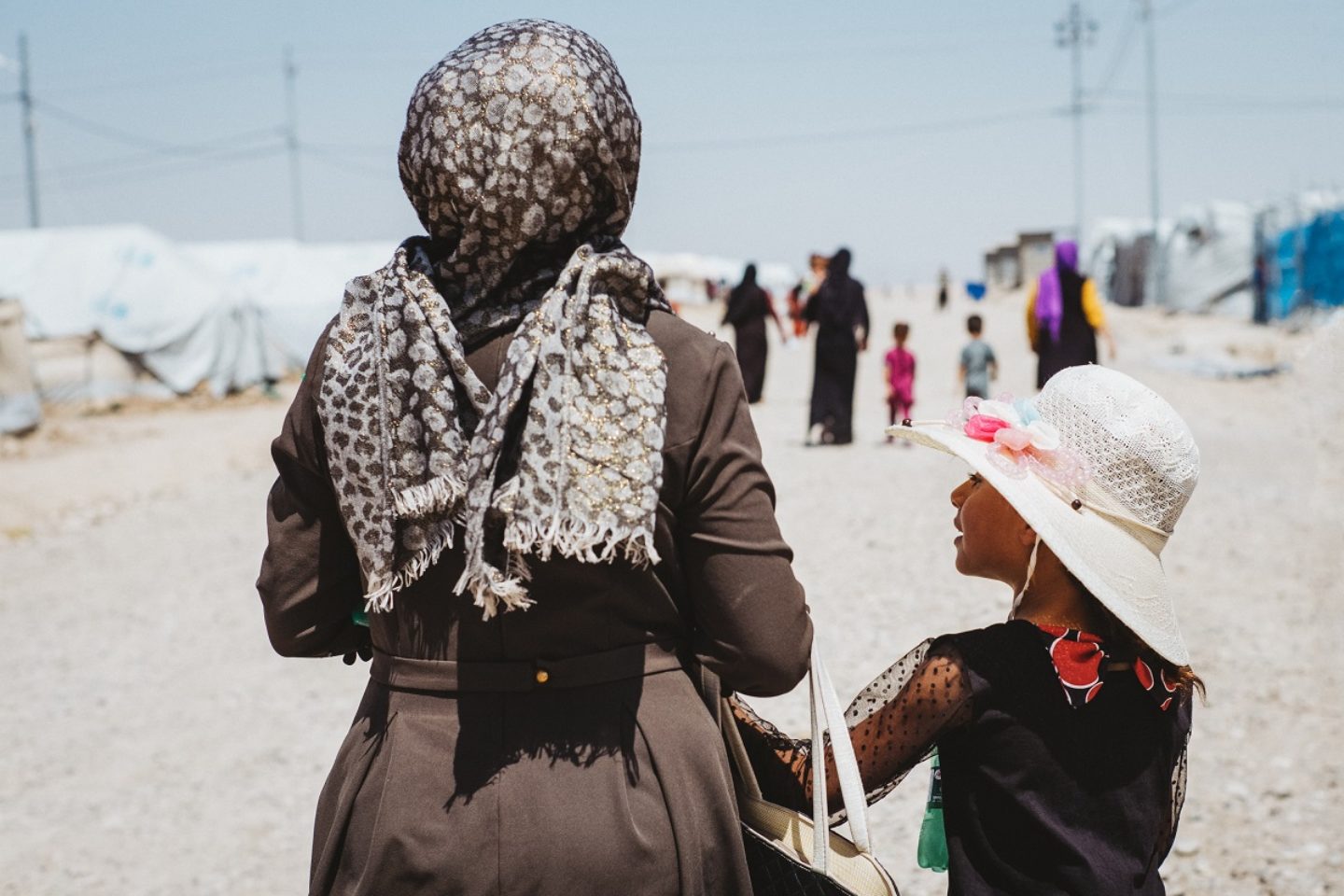 Samira and her family have a strong connection that is apparent when you meet them. It doesn’t come from having a lovely home or beautiful garden, but from the love they have for each other. As a woman in Iraq, Samira leads her family and shows her children that there is hope for tomorrow even as they grieve for what has been lost.

Jordan: Where hope is greater than despair

For a Syrian refugee living in Jordan, loss never comes just once. In the early days of the Syria crisis, you likely lost friends or family in the growing turmoil. As you fled for safety to neighbouring Jordan, there was the loss of your home. When you moved into a tent in a refugee camp or into an unfinished building in an urban centre, there was the loss of the way of life you once knew. As the crisis continued and your savings ran out, there was the loss of a certain future.

But for a group of Syrian women gathered in East Amman, the one thing they refuse to lose is hope. 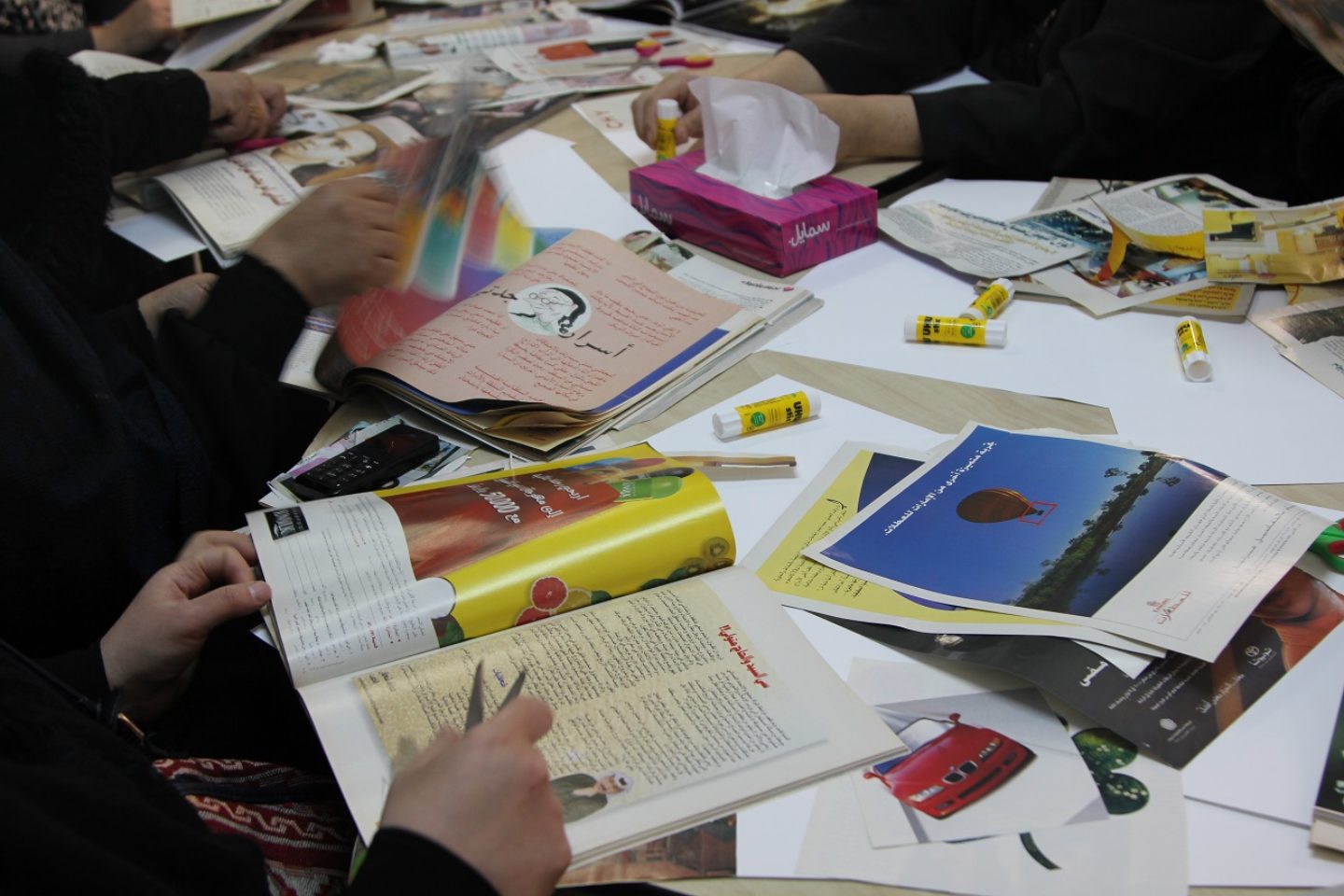 Seated together in the back of a community hall, a group of women is creating collages that illustrate their hopes for the future. For the past 11 weeks they have participated in psychosocial support sessions run by Medair. Just by being here, they’ve made the decision to hope.

They flip through old magazines, cutting out images and chatting to each other about what each image means to them.

Rahlat carefully cuts around an image of a hot air balloon drifting over a green expanse of land. “I want to have a farm with cows, and a house with my own bedroom,” she says. “I want to travel to Canada.”

“I love to sew,” says Ara, who has a growing pile of images of clothing next to her. “Back in Syria I was taking a sewing course, and I had a sewing machine. My hope is to become a tailor.” 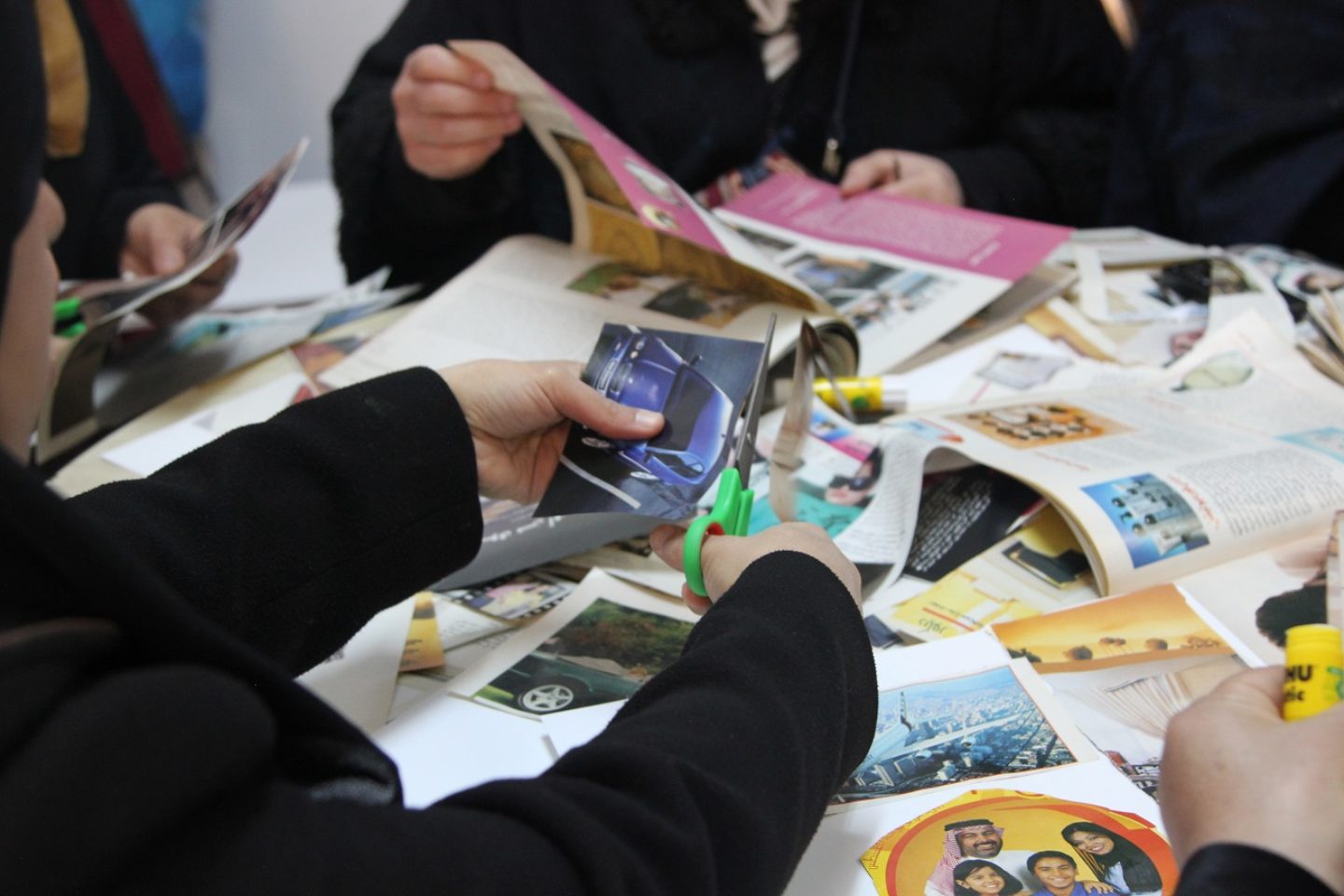 “My hope is my children,” says Rima, who cuts out an image of a smiling family. “Before I got married, all I wanted was to be a mother. Now when I hear my daughter call my name, it gives me hope.”

Though today is light and joyful, the journey they’ve taken to get here has been anything but easy. The most difficult sessions, says Duha, a Medair relief worker who runs the sessions, deal with loss and grief.

Just three weeks ago, each participant in this room sat in front of an empty chair and imagined somebody they couldn’t speak to anymore – often somebody who had passed away, been killed, or who still lives in Syria but cannot be reached – and told that person all of the things they never had a chance to say.

In the face of everything these women have already been through, it takes a huge amount of courage to decide to stare some of their most painful memories in the face. It takes even more courage to continue coming back week after week, and not giving up on what you’ve already invested in yourself, your family, and the group 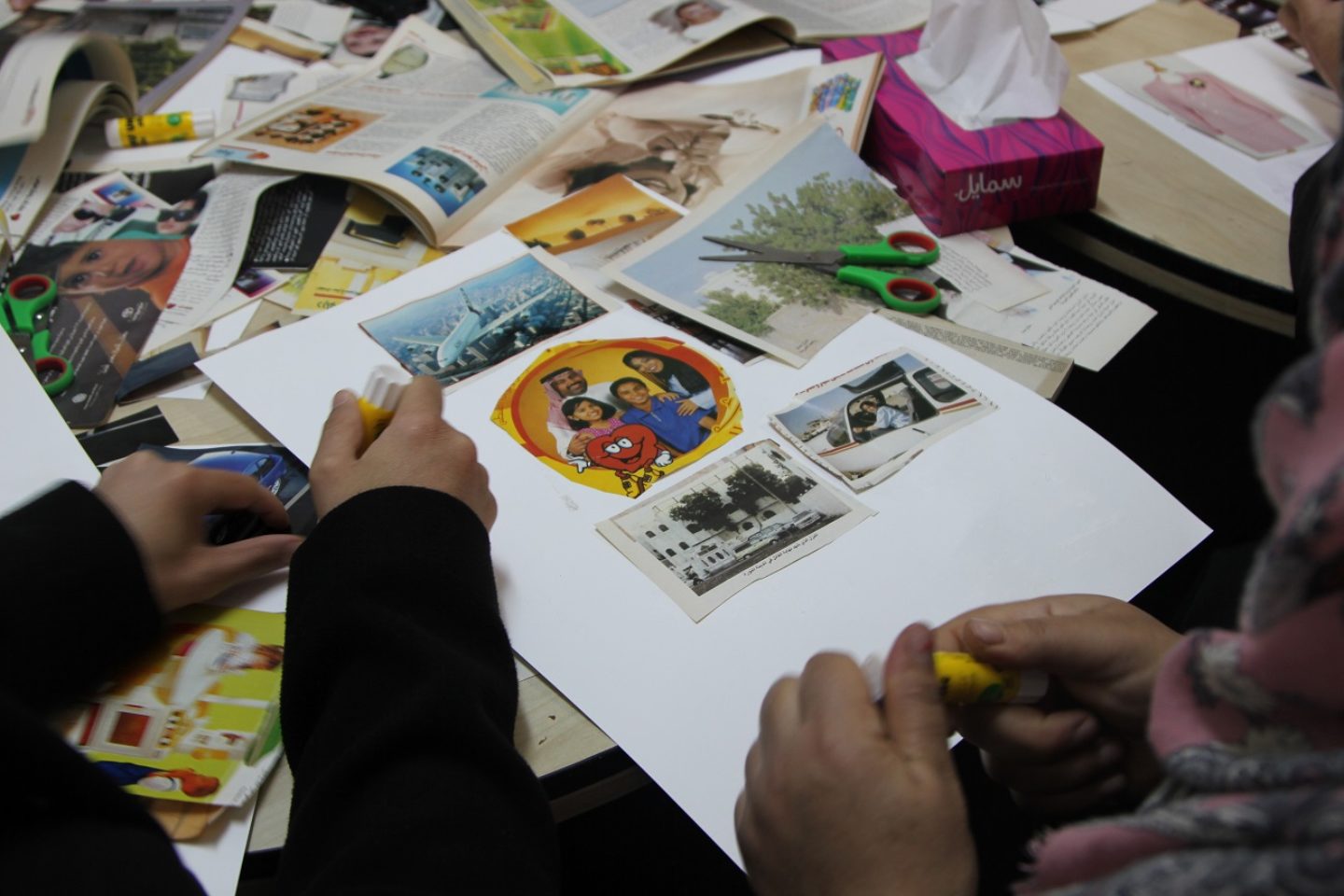 Among these women, common hopes soon emerge: family, home, education, a bed to sleep in, and a kitchen where the family can all eat together. They are hopes that reflect how drastically their lives have changed since the beginning of the Syria crisis, but they are also hopes that reflect the capacity to move past trauma and loss and uncertainty, and to focus on family and community.

They reflect the hopes of people who are rebuilding their lives, and who refuse to give up. 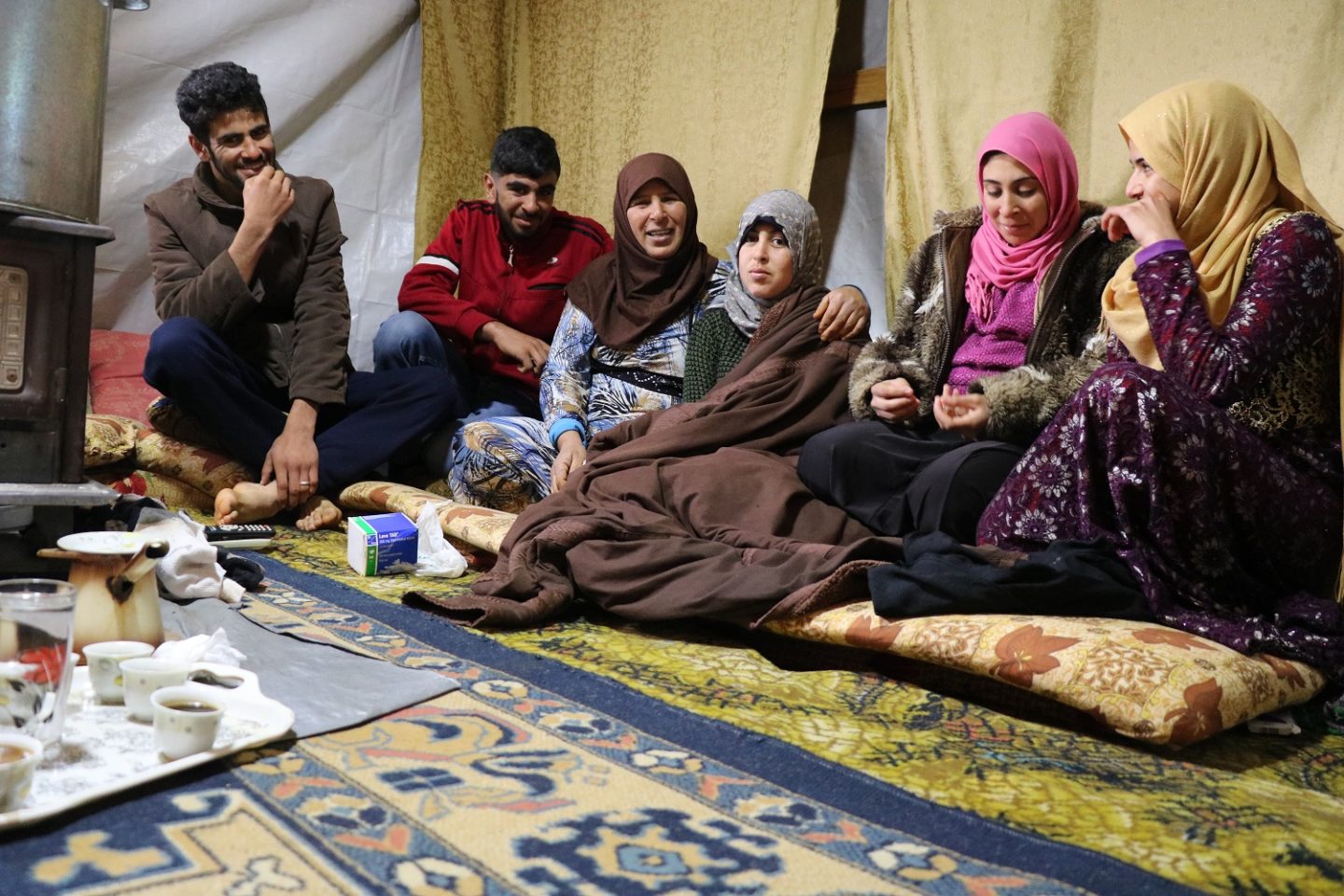 Sabeen and her family fled their hometown of Hamah, Syria, in 2012. They had stayed at home for as long as they could, but when they started losing family and friends, they knew it was time to leave.

With her children and husband by her side, Sabeen boarded a bus to the Lebanese border. It was packed with people trying to cross into Lebanon.

“I couldn’t bring anything,” Sabeen remembers. “I just had my children.”

Sabeen’s family joined a group of Syrian families and formed an agreement with a Lebanese landowner to set up an informal tented settlement. They settled into their temporary lodgings to wait until it was safe enough to go home.

They were still living there two years later when the agreement with the landowner eventually fell apart. When they packed up and moved for the second time, Sabeen brought only her family with her. 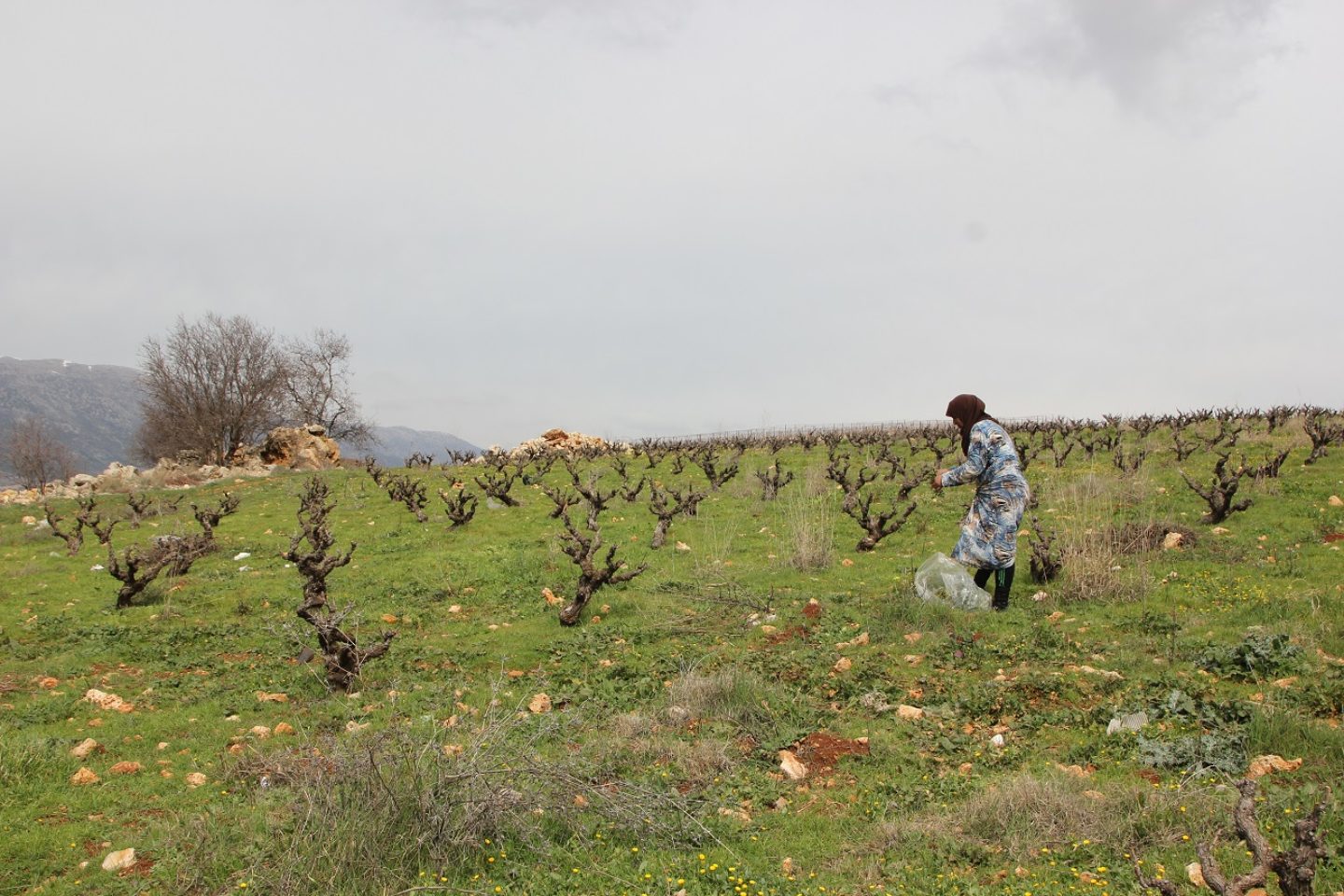 They set up again in the middle of a vineyard. It is surprisingly beautiful: her family’s tent is surrounded by rows and rows of low twisted grape vines set against a view of the snow-capped mountains that make up part of the border between Lebanon and Syria. 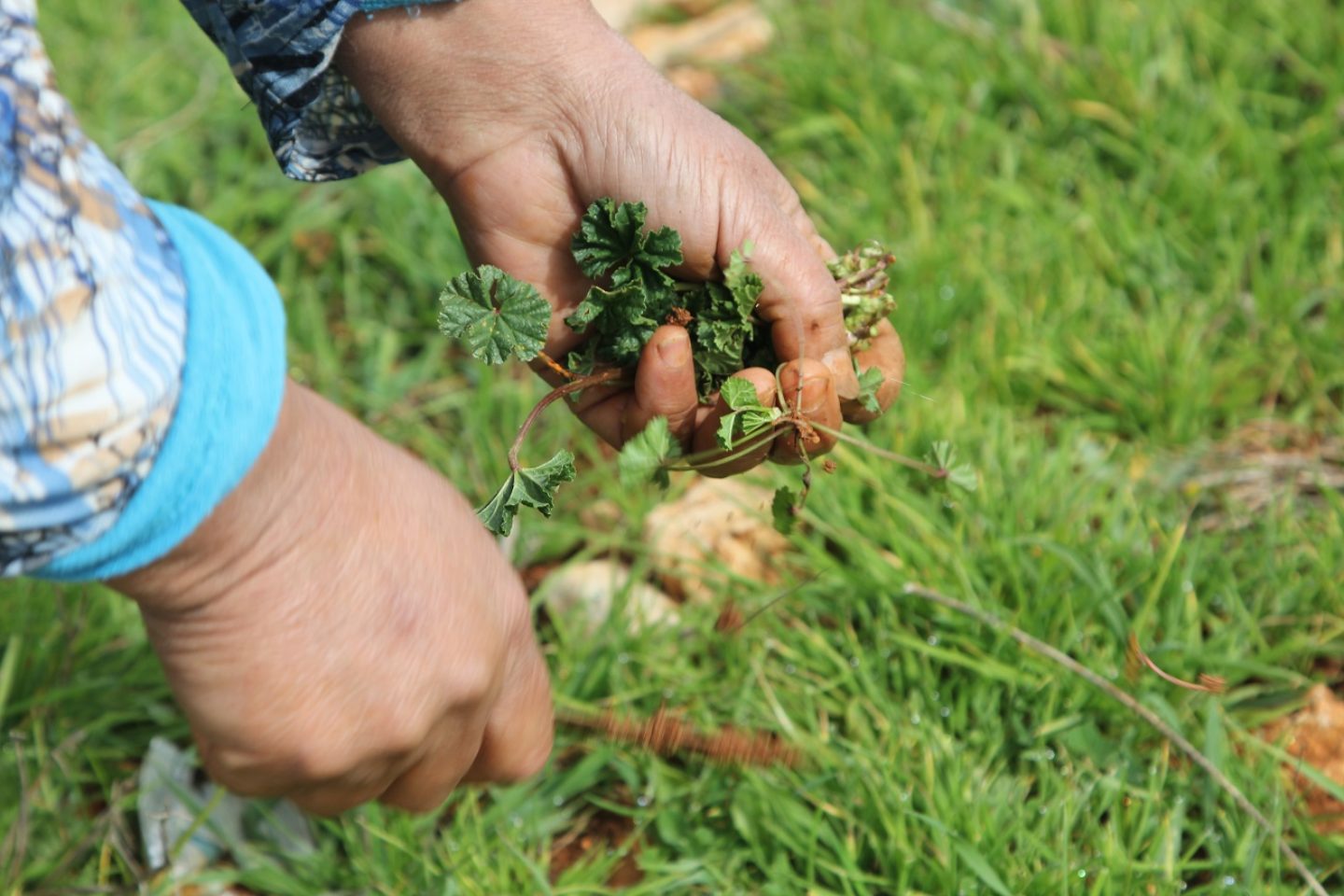 The vineyard owners pay Sabeen, her husband, and her eldest son to help keep up the land. Collectively, they can earn around USD 12 per day, which makes up a vital part of their income. Their eldest daughter, Amal, is epileptic. She is in constant need of an expensive anti-seizure medication. 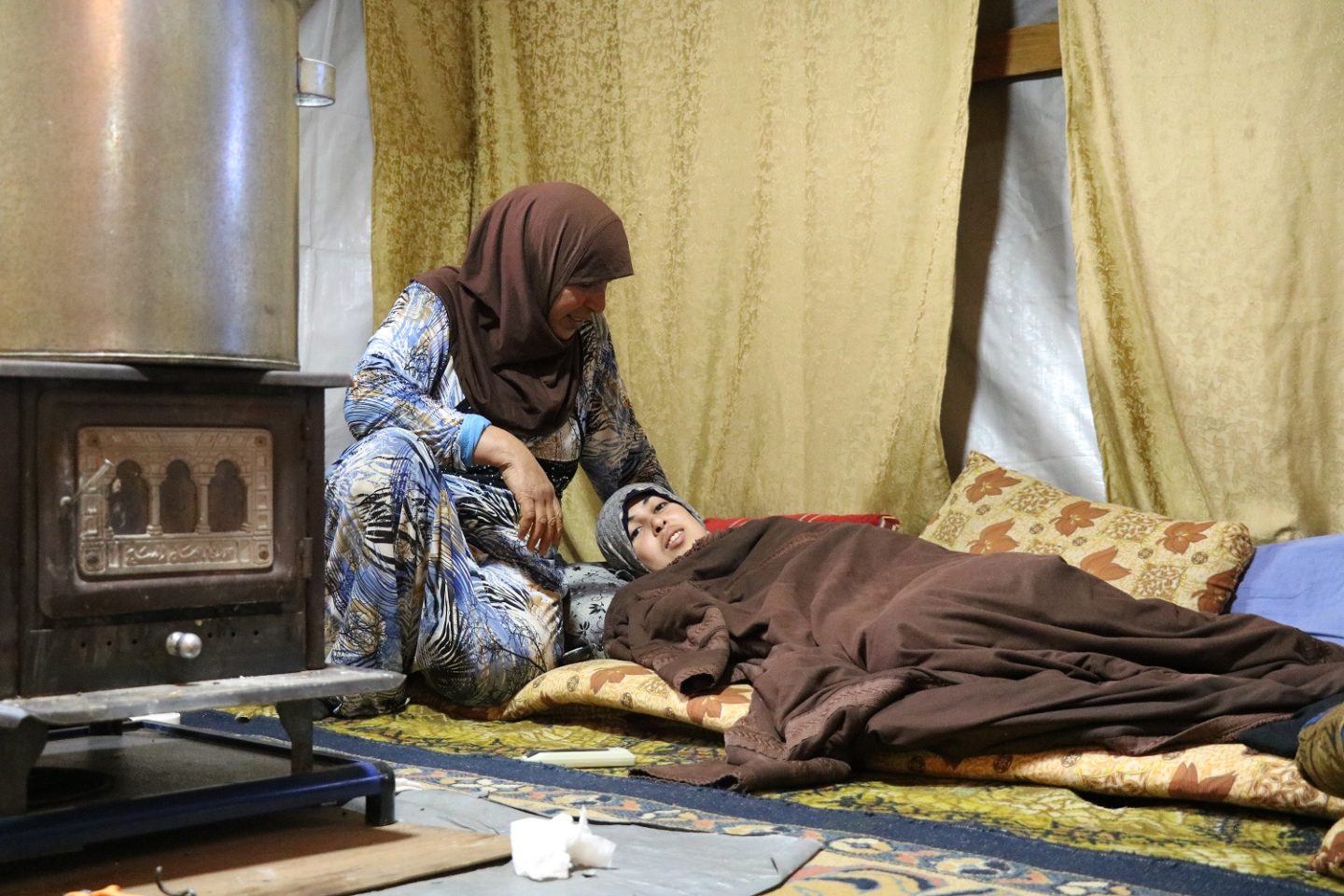 “The epilepsy started when Amal was four years old, but back in Syria the medicine for the treatment was free,” Sabeen says. In Lebanon, she must pay USD 150 per month.

At the moment, almost everything the family earns goes towards covering the cost of Amal’s medication. “Everything we have is from other people,” says Sabeen, gesturing at her clothes and the mattresses inside her tent on which we now sit. “But it doesn’t matter. All I care about is the health of my daughter.”

Medair covers the cost of safe water deliveries to the settlement where Sabeen lives, and has provided the family with shelter materials for their tent. Her daughter Rasha, who is eight months pregnant, receives subsidised health care at a Medair-supported clinic. 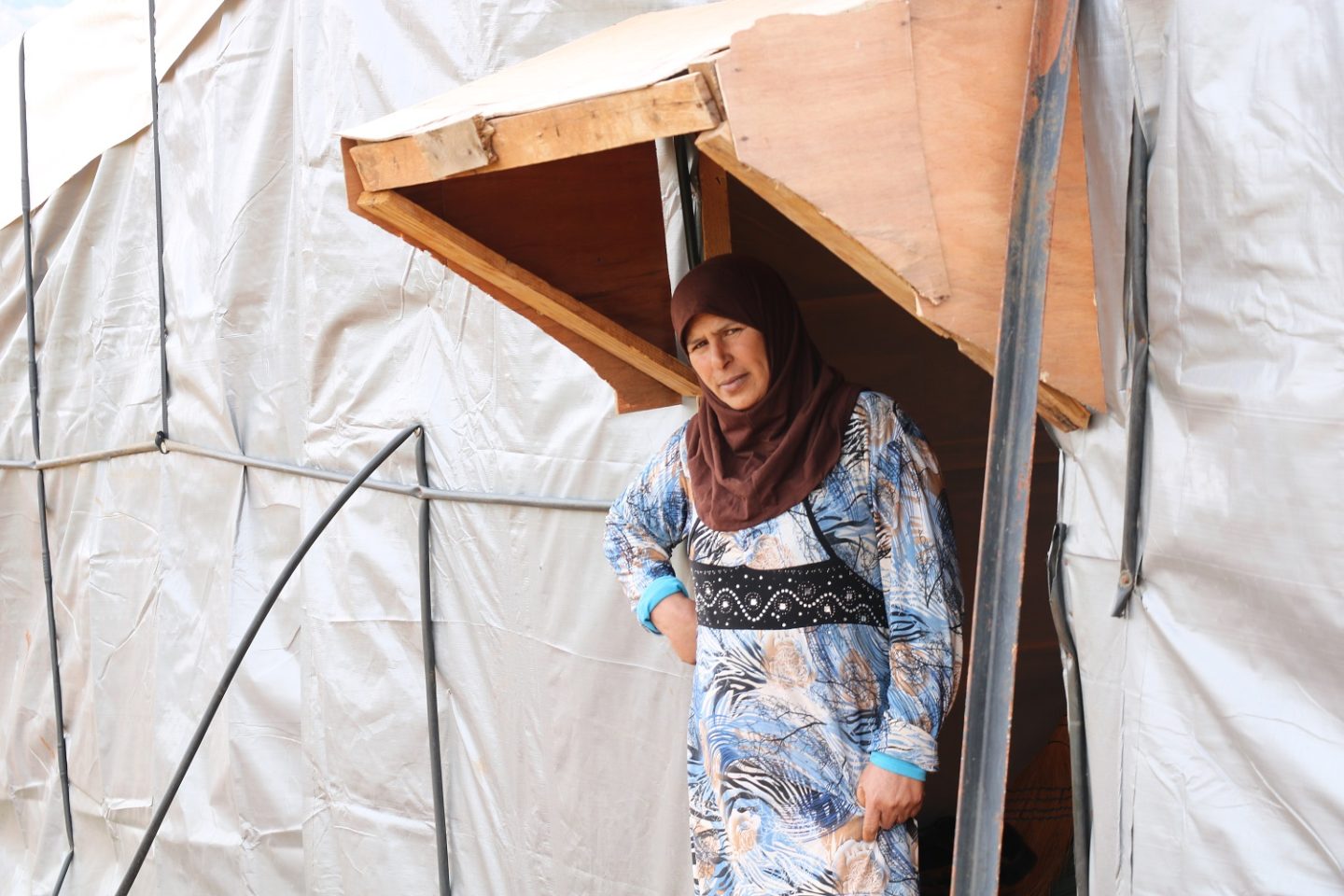 Sabeen is excited about the birth of her first grandchild, but she’s quietly worried as well. Sabeen herself isn’t in the best of health: Two years ago she found a lump on her neck which rapidly swelled from the size of a lemon pip to a large lump. A doctor diagnosed her with cancer and removed the lump six months later, but recently Sabeen has had flu, and the lump in her neck seems to have reappeared. She is worried the cancer is back, but she refuses to let it shake her resolve. 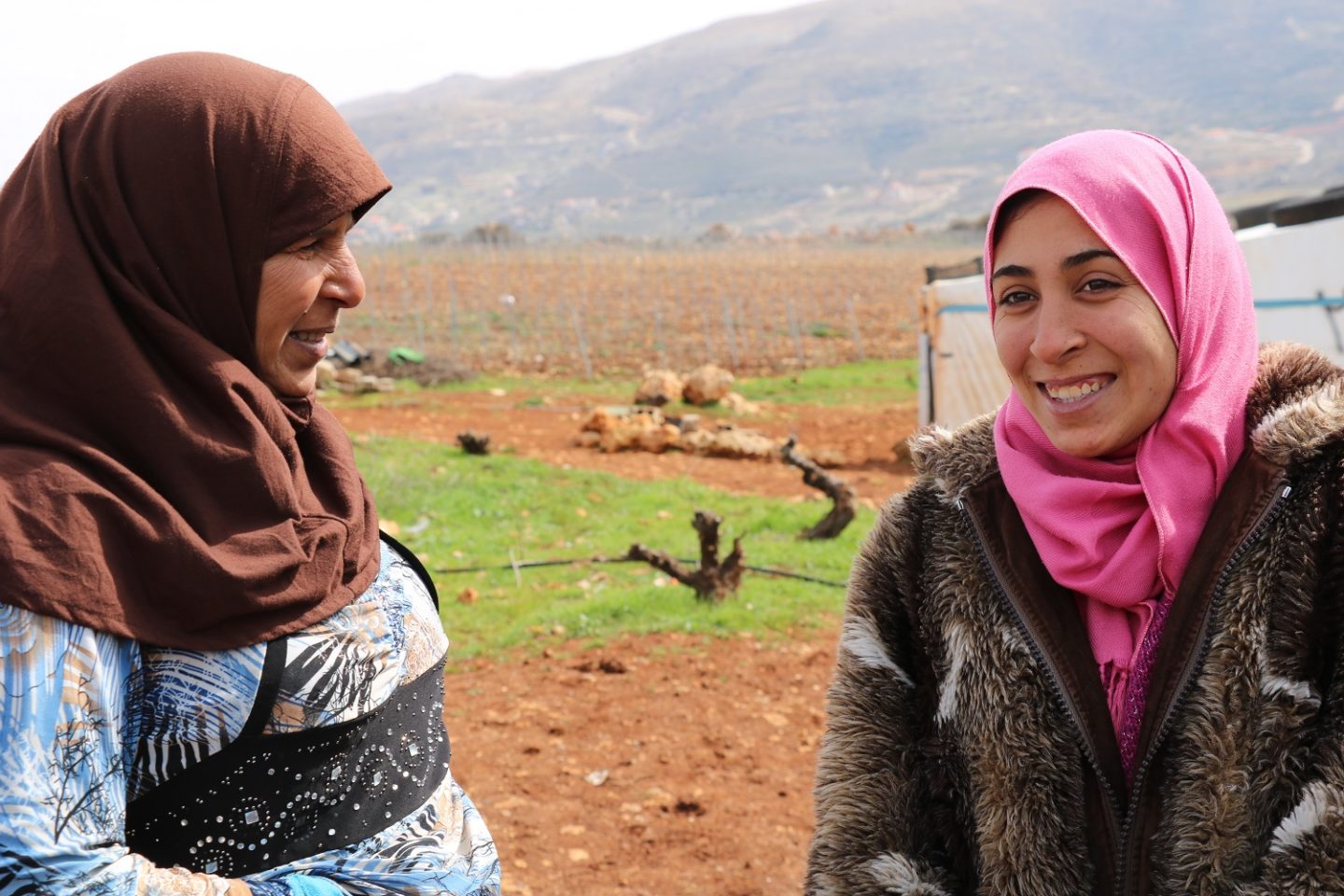 “Every day when I wake up, my strength comes first from God,” she says. “It also comes from my father. He stayed in Syria. I call him every day, and he motivates me to keep going. He always says, ‘Good things come to those who wait.’ And finally, my strength comes from my children. I know I’m all they have. If my husband and I didn’t work hard for them, nobody would.”

Throughout the Middle East, Medair provides humanitarian relief to families who have been touched by violence. Our teams bring safe water and life-saving health and shelter assistance to vulnerable people who have few other options for survival. Our work is made possible with the support of, EU Civil Protection and Humanitarian Aid, European Union’s Madad Fund, German Federal Foreign Office, Global Affairs Canada IHA, Gebauer Foundation (CH), SlovakAid, Swiss Agency for Development and Cooperation, Swiss Solidarity, UN High Commissioner for Refugees, UN Office for the Coordination of Humanitarian Affairs, and the US Agency for International Development.