“Climate change will add complexity and uncertainty to the myriad challenges faced by Lebanon. What is certain, however, is the need for action and the full engagement at all levels of the community, today and into the future.” says Najat Rochdi, UN Resident & Humanitarian Coordinator for Lebanon.

Over the last few years, Lebanon has been through immense challenges that have left no sector untouched. The country has been challenged by a socio-economic crisis, political unrest, fuel, electricity, and medication shortage, the COVID-19 pandemic, the Beirut port blast, and environmental disasters such as flooding and forest fires. These challenges are crippling Lebanon and hindering its development as the country continues to spiral out of control. In addition to all these factors, Lebanon faces yet another overlooked challenge – climate change.

As the world continues to face unprecedented environmental challenges surrounding climate change, in Lebanon, climate change is expected to continue to increase temperatures drastically during the summertime. In the last two years, Lebanon suffered from devastating wildfires fueled by high temperatures, seasonal dry heatwaves, and gusty winds. Hundreds of fires have swept across Lebanon and the coastal regions of neighboring Syria during summer heat waves, reaching dense and largely populated areas. The effects have led to severe fragmentation and loss of the forest ecosystems. This will have a negative impact on the agricultural and health components, and livelihoods of both the host and vulnerable communities, as generally the climatic conditions in the Middle East continue to shift towards drought with warmer and longer summers.

Higher temperatures will result in unanticipated open fires across the country and pose a bigger threat for the vulnerable communities, residing in the informal settlements (ISs) across Lebanon. Refugees continue to live in conditions below humanitarian standards with over half (57%) of Syrian refugee families living in overcrowded shelters, shelters below humanitarian standards, and/or shelters in danger of collapse. (VASYR,2021)

The settlements arise because of housing needs for low-income community members or migrant workers. Informal settlements are densely populated and overcrowded structures. Typically, the homes are quickly assembled on any plot of available land, using wooden panels and some pieces of fabric and tarpaulin, making them susceptible to unsafe cooking, heating appliances and open fires. Women, children, the elderly, and persons with specific needs are the most vulnerable to burn injuries. Therefore, Medair’s comprehensive fire program is tailored to promote the safety, health, and well-being of the vulnerable communities. 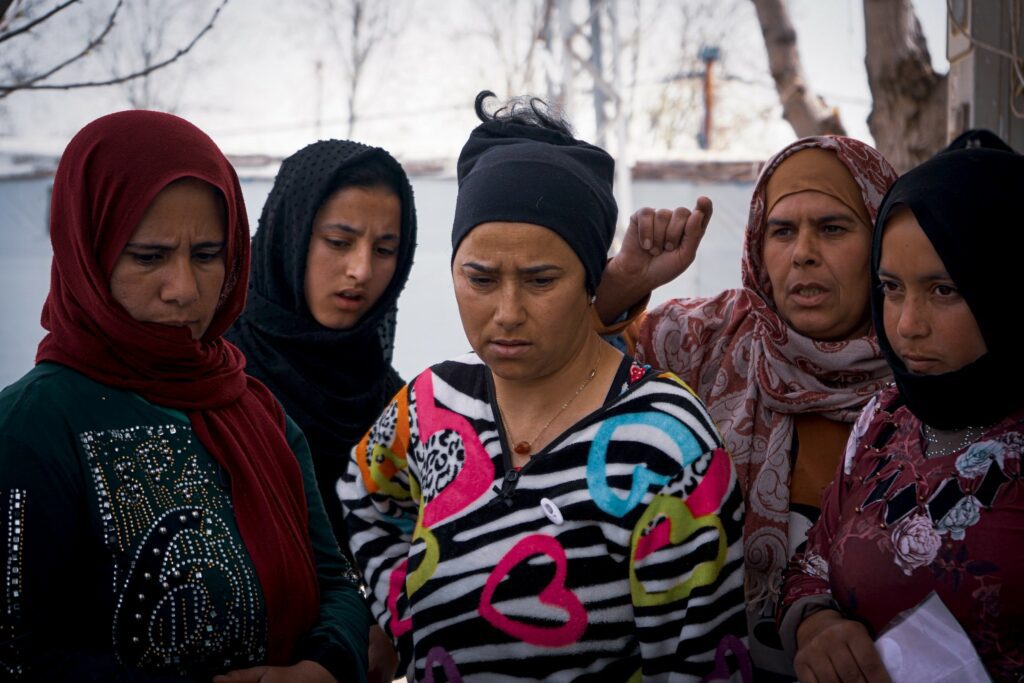 Barland, 41-year-old, Syrian ‘shaweesh’ (meaning the person nominated by other community members to act as the settlement supervisor and decision-maker) accompanied by fellow Syrian community members is the last person to register at the Maalaka, Zahle, capital of the The Bekaa Valley on the 6th of April 2022. ©Medair/Abdul Dennaoui

“My main priority as shaweesh is to keep everyone in our community safe. Safety always comes first. Knowing that we are dealing with unpredictable climate change year after year, we must be ready for anything. Last year, it was particularly difficult with the long dry heatwaves that were hitting us during the summer. It would go on for days. God forbid a fire erupted, there would have been no way to stop it.” says Barland, 41-year-old, Syrian ‘shaweesh’ (meaning the person nominated by other community members to act as the settlement supervisor and decision-maker). 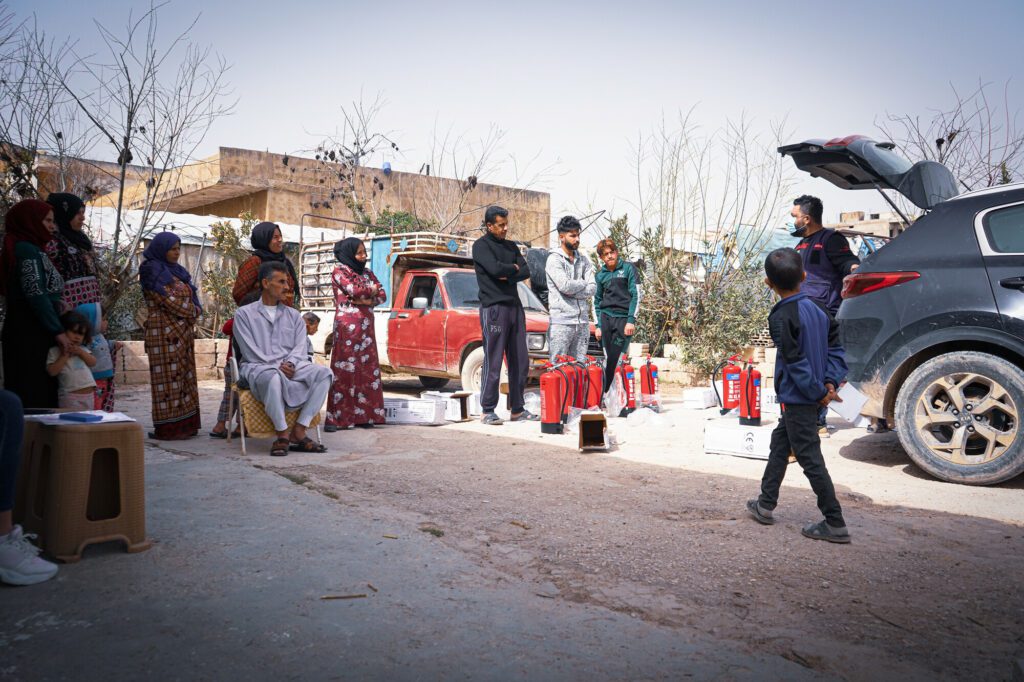 Rami, Medair’s distribution officer, starts the fire awareness session after gathering the focal points as well as other community members at the Maalaka, Zahle, capital of the The Bekaa Valley on the 6th of April 2022. ©Medair/Abdul Dennaoui

Medair’s work in Lebanon is made possible by the support of United Nations High Commission for Refugees (UNHCR) and generous private donors. 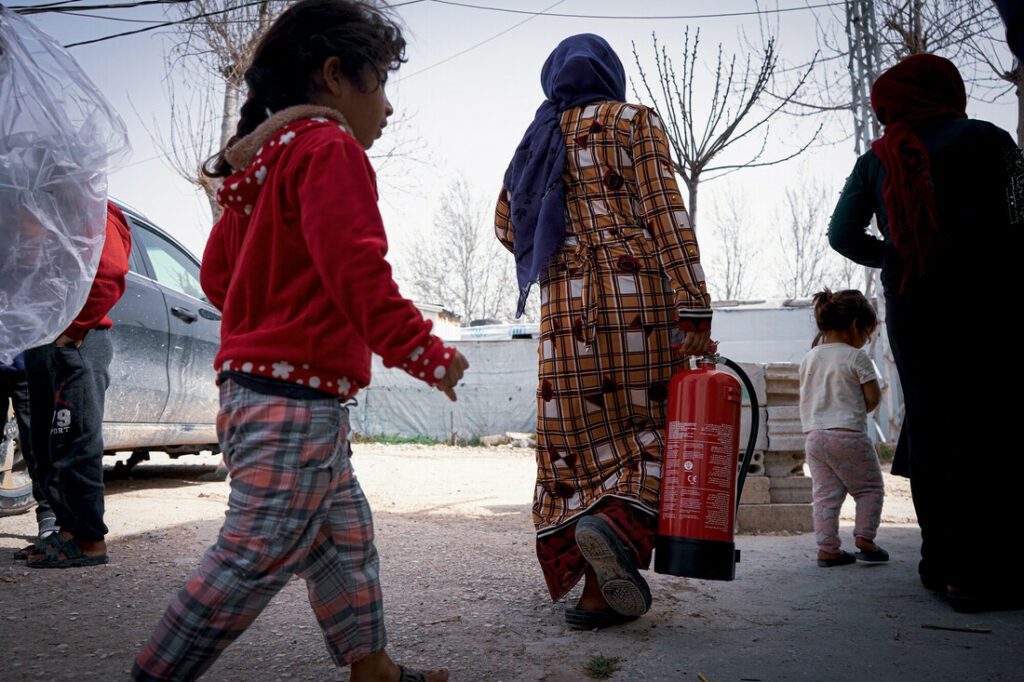 Other Syrian community members and appointed focal points carry the fire extinguishers back to the informal settlement at the Maalaka, Zahle, capital of the The Bekaa Valley on the 6th of April 2022. ©Medair/Abdul Dennaoui