Five years after the crisis on Sinjar Mountain, Medair is still here to support survivors. In the summer of 2014, under the scorching desert sun of northern Iraq, tens of thousands of Yazidi men, women, and children fled to Sinjar Mountain. Believed to be a sacred place by one of Iraq’s oldest minorities, Yazidis sought refuge from the intensifying violence inflicted by encircling armed fighters.

Five years after the crisis on Sinjar Mountain, Medair is still here to support survivors.

In the summer of 2014, under the scorching desert sun of northern Iraq, tens of thousands of Yazidi men, women, and children fled to Sinjar Mountain. Believed to be a sacred place by one of Iraq’s oldest minorities, Yazidis sought refuge from the intensifying violence inflicted by encircling armed fighters.Trapped and besieged, tens of thousands* endured temperatures up to 50° Celsius without food or water. However, many Yazidis didn’t make it to the mountain. Hundreds were killed and many were abducted and enslaved by their captors.

As the humanitarian crisis unravelled, the world took notice. The United Nations declared a Level 3 emergency, the most severe classification of its kind. UN agencies called for humanitarian organisations to mobilise within the region.

Medair Emergency Response Team was the first international humanitarian organisation on the ground providing life-saving care to the desperate communities. In just six weeks, the teams had assisted over 11,000 people.

“Before they [armed groups] came, I knew something could happen and I was worried about what would happen in our community,” said Afrah, a Yazidi survivor who now works for Medair running psychosocial support groups in Sinjar. She adds, “I was one of the victims, but thankfully I wasn’t captured.

“I was on my way to Sinjar town when my brother told me to come home. I came back and started calling my friends to hang out—that’s when I felt something was going to happen; something was wrong,” explains Afrah. “I woke up my siblings to get ready. We got into my cousin’s truck and we left. My father stayed behind initially. We lost contact, and we couldn’t make any calls; the network was gone.” 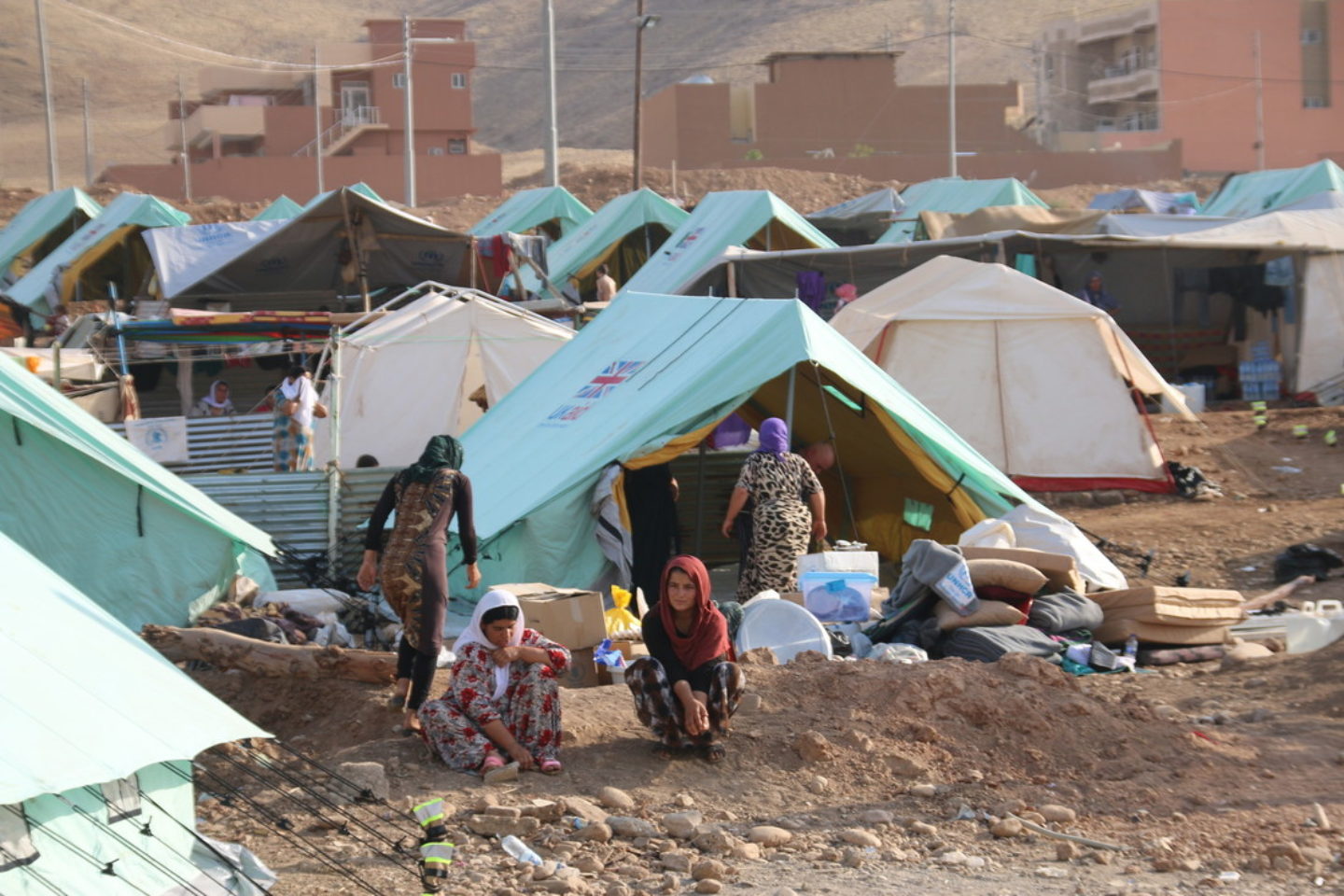 In a matter of days, approximately 1 million people fled their homes. The overall number of displaced eventually rose to 6 million. Families fled their homes with only the clothes they were wearing, often fleeing on foot. Afrah’s father was one of the lucky few able to escape across the border into Syria.

No one knew how long this crisis would last. Many said they expected to go home within a few days.

“We were told it was a matter of two hours and then we could come home. We didn’t know what would happen,” said Afrah. In the end, she only returned to living in her hometown five years after the offensive.

Armed groups held the town of Sinjar for 15 months until it was finally recaptured in November of 2017.

The heightened conflict has passed, but the emergency continues. According to the United Nations Office for the Coordination of Humanitarian Affairs (OCHA), 1.8 million people remain displaced today throughout Iraq. Over half of those people are living in protracted displacement with 54 percent having been displaced for three or more years**.

Every facet of Iraqi society has been impacted by years of conflict. The economy has taken a severe hit and entire communities have been devastated or destroyed. Unexploded ordinances of war remain scattered amongst communities. Homes have been destroyed, along with schools, medical facilities, water networks, and electrical infrastructure. For many people, access to basic services is dependent on international humanitarian support.

Five years after the offensive that led to the Yazidi’s fleeing to Sinjar, the physical and emotional scars live on. Families had been exposed to challenging events long before the hardships that accompany their current displacement, including emotional distress before, during, and after their displacement. Through group and individual psychosocial support sessions, people are learning ways to process their difficult past.

“When the crisis took place, people didn’t realise what happened to their mental state. Once people started to have stability in their life, they started to realise something wasn’t right,” said Afrah. “Each person in the community is in need, and each person deals with trauma in a different way. Medair focuses on those who have been affected by a crisis to help with their recovery and relief,” she continues. 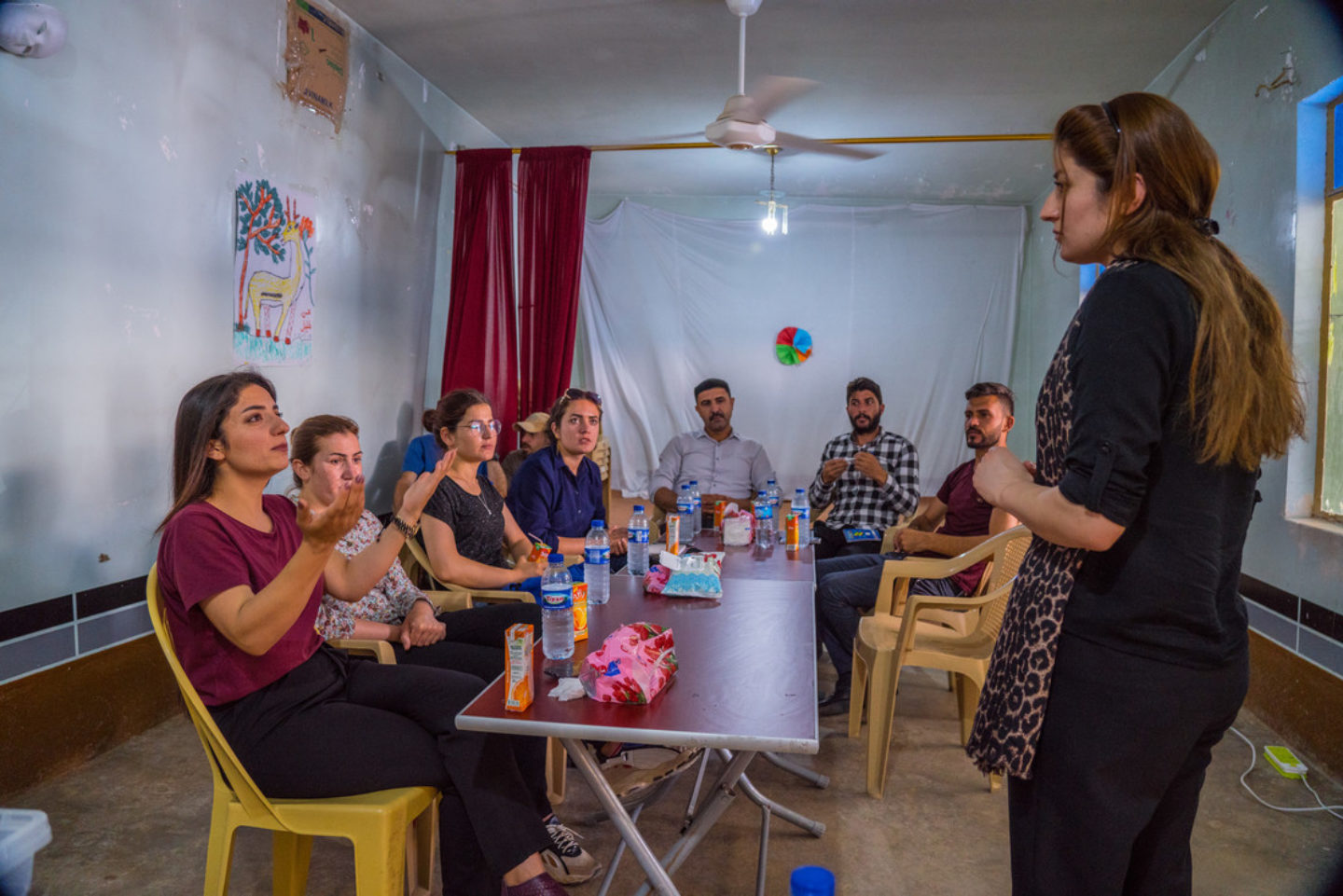 Psychosocial Support Officers like Afrah lead six-week interactive sessions where community members gather to learn methods of coping with loss and grief, depression, anxiety, understanding children, and their response to stress. Psychosocial Support Officers teach people relaxation techniques and how to better listen to their peers. The sessions offer a safe setting to share experiences and build community support.

Jalila, 24, from Sinjar town, lived through the horrific events of 3 August 2014 that fractured normalcy within her family’s way of life. Twelve relatives were killed on the frontlines and 30 went missing. Only six survived. Jalila and her family zigzagged in the night, working their way through the rocky crags of Sinjar Mountain. They heard shells firing at them from behind and continued to run until they were confident the armed groups couldn’t reach them. 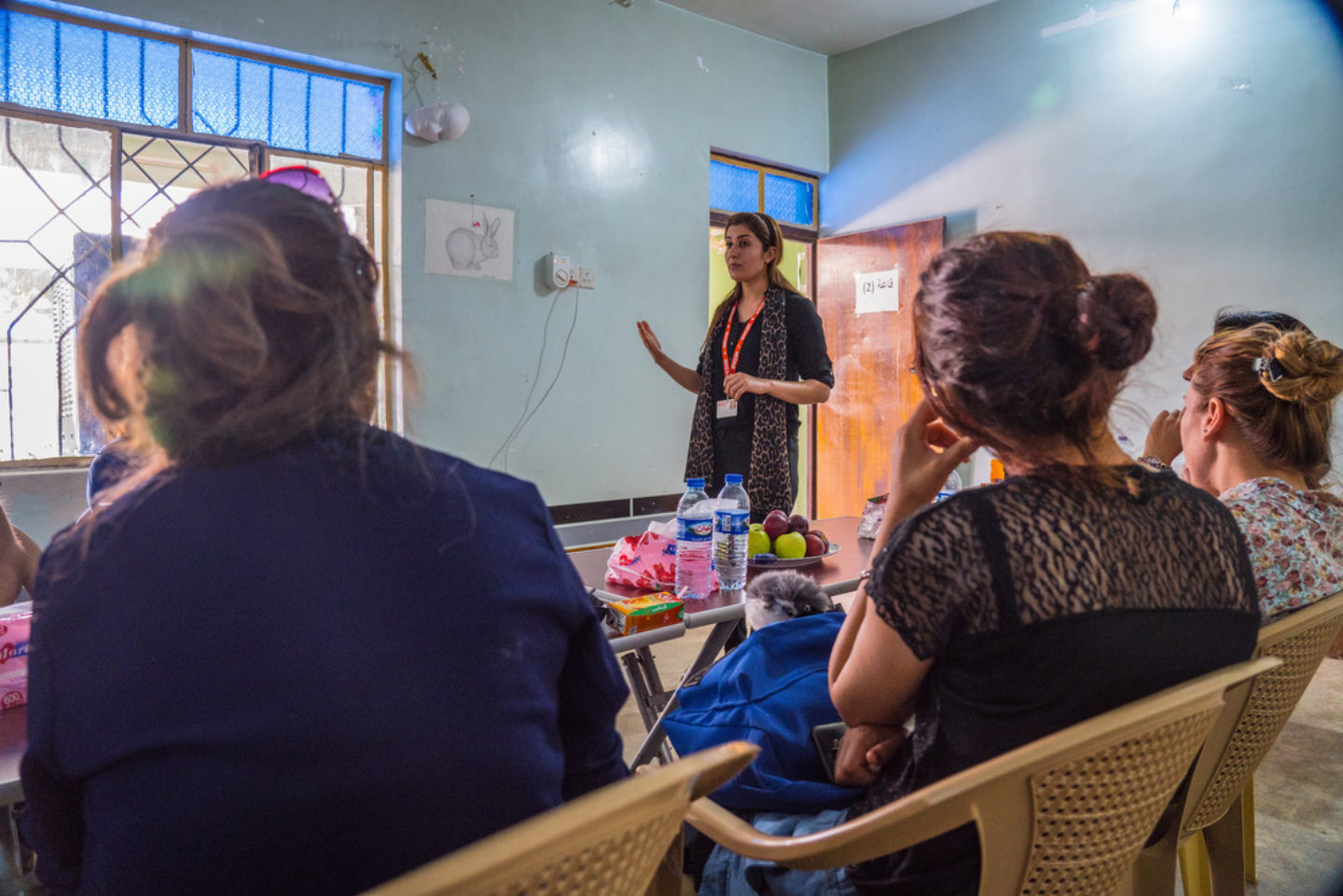 Currently, Jalila works as a social worker at a local non-governmental organisation. On 30 June 2019, Jalila and her colleagues attended the final psychosocial support sessions led by Afrah.

Commenting on the sessions, Jalila said, “It’s really helpful for the community – especially for teenagers. As NGO employees, we feel like we don’t need sessions for mental health, but everyone needs support. Everyone. Families, kids, aid workers, every internally displaced person. No matter where they are. They’ve gone through a lot.”

Jalila’s and Afrah’s stories represent a small fraction of what hundreds of thousands have experienced within the past five years in Iraq. The trauma doesn’t end when the events are over; it lingers. But psychosocial support sessions can save people well after the fighting is over.

Afrah adds, “When people are ill or wounded, they seek help at a health clinic. Psychosocial support is the same. When someone is hurt on the inside, they also need help to heal. The anniversary of the attack is approaching and I see it as all the more reason to talk about the trauma. People will remember what we’ve talked about in the sessions and it will help them as they grieve.”

Today, 3 August 2019, marks the five-year anniversary of the Sinjar Crisis. And today marks five years of Medair’s serving, building, listening, restoring, strengthening, and ultimately responding to the greatest needs of the Iraqi people.

*Exact numbers are still uncertain; this flash update from UNOCHA published 4 August 2014 estimates the number of people on the mountain was between 35,000 and 50,000.

This content was produced with resources gathered by Medair field and headquarter staff. The views expressed herein are those solely of Medair and should not be taken, in any way, to reflect the official opinion of any other organisation.”