CEO BLOG: A word on Medair’s response in Ukraine

As the situation in Ukraine continues to shock the world, our emergency response team is hard at work both inside the country and at the Polish border. We are supporting the massive grassroots volunteer effort helping refugees and providing physical and mental health care to Ukrainians displaced within the country.

Some have asked whether Medair is needed in eastern Europe. Although we have previously responded in Kosovo, Chechnya and North Ossetia, it is true that our commitment to the most vulnerable more commonly takes us to poorer parts of the world. 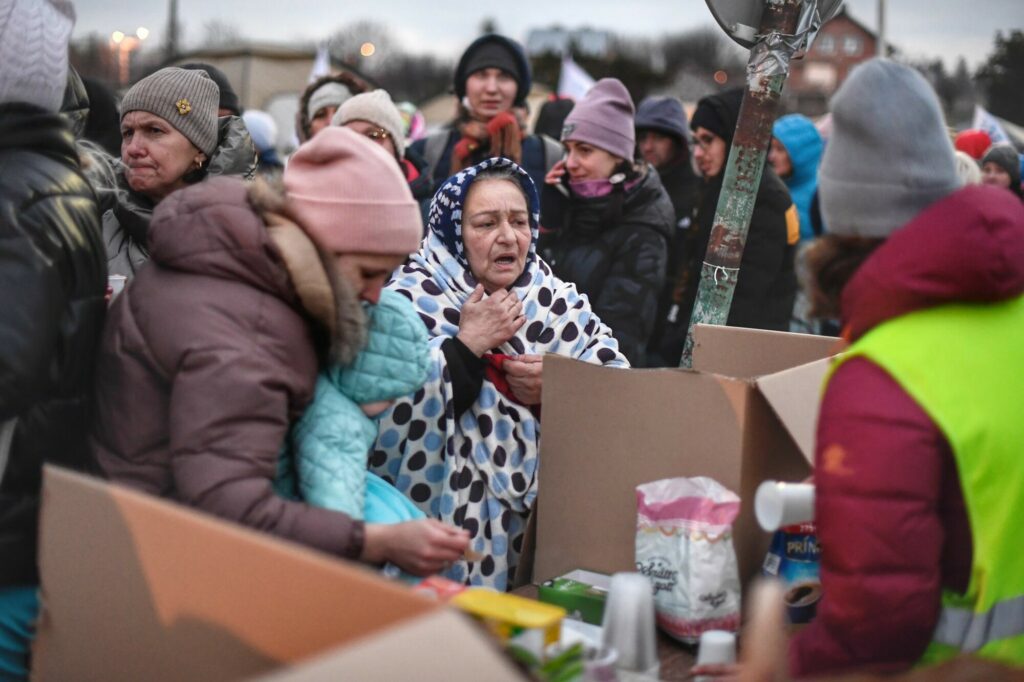 An elderly woman stands at a crowded refugee reception point for Ukrainians in Poland.

When deciding where to respond we consider three factors: scale of need, vulnerability, and coping capacity. With an estimated 18 million people affected, Ukraine now ranks among the worst humanitarian crises in the world. In terms of vulnerability, a third of those needing assistance in the country are elderly – the highest proportion of any crisis globally. And Ukraine’s previously good coping capacity in terms of income and infrastructure is now being decimated by the conflict, while neighbouring countries’ resources are being overwhelmed by the vast number of refugees. All these factors make it clear that we need to be responding.
Yet as our emergency response team works to meet the needs of desperate Ukrainians, we are deeply concerned about the lack of attention on other large-scale humanitarian crises. In a rapidly escalating emergency that may have escaped your attention, 13 million people in the Horn of Africa are currently facing starvation due to historic drought. In Afghanistan, 24 million people are in dire need; in Ethiopia, 25 million; in Yemen, 20 million. Understandably there is a heavy media focus on events in Europe, but we mustn’t ignore the neglected crises taking place in other parts of the world.

A Medair medical assistant assesses a child for malnutrition in Yemen. Since an escalation of conflict in 2015, Yemen has become one of the largest humanitarian crises in the world.

As I receive briefings on the dire situation in Ukraine, we are also getting news that a number of these all-but forgotten major crises are facing serious funding shortfalls or cuts. What is more, they are likely to be worsened by the knock-on effects of the conflict in Ukraine. With its fertile soil the country has long been a major supplier of grain to the world: for example, Yemen imports half its wheat from Ukraine and Russia, while Lebanon relies on Ukraine for 60% of its wheat. The disruption caused by the conflict in Ukraine will drive up food and fuel prices globally and significantly increase hunger, particularly in poorer countries reliant on imports.

With all the ongoing discussion over the potential global fallout of the Ukraine conflict, it can be hard to separate the human crisis from its political implications. But as a neutral and impartial humanitarian organisation, our job is to allocate resources based on need alone. We cannot let politics, media attention or the public mood dictate our decisions. A country may play a certain role on the world stage, but countries are made up of people. One person is not more important or more deserving of our care than another. Those fleeing violence may look just like me, or nothing like me. As a humanitarian the only question I must ask is: what is their level of need right now?

The extraordinary outpouring of international concern for Ukrainians has been heartening, a welcome reminder that we can, and do, find it in ourselves to care deeply for our fellow human beings – even after the pressures of two years of a global pandemic. But we must go further. We cannot let our concern over the current crisis blind us to urgent suffering elsewhere.

That is why we are pressing on to expand our operations, so we can both reach vulnerable Ukrainians and redouble our efforts to serve vulnerable Afghanis, Yemenis and many others facing urgent need. As overwhelming as it is to face so many crises bombarding our world at once – and it is – compassion must not be partial. If any one of us suffers, it carries implications for us all.