I recently returned to the UK after working with Medair in DR Congo for almost four years. In this piece, I reflect on some of my experiences there.

A common myth about humanitarian work is that foreign aid workers – or ‘international staff’ – such as myself experience a hero’s journey, daily risking our health and safety, overcoming challenges like travel logistics and poor internet, to serve (and save) people affected by shocking circumstances. We return to our home countries, faces lined with care but halos shining brightly, and play it cool. “All in a day’s work.”

In my case at least – working as Project Coordinator, based in Kirumba, North Kivu – I was quite far removed from the moment of contact between our services and the people who access them. My key responsibility was to lead the team, working with managerial staff from each department to set priorities and expectations, facilitating good internal communication, and ensuring that each person felt supported and valued.

Conscious of the need to witness the impact of Medair’s projects and to encourage my staff and government partners, I prioritised visiting Medair’s project sites about once a month. These visits were invariably memorable due to stories I heard from colleagues, patients, and community members, so I would like to relay some of those to you here.

These visits also helped me to maintain perspective on how my day-to-day work could (and should) contribute to excellent service provision on the front line. We’ll come back to that. 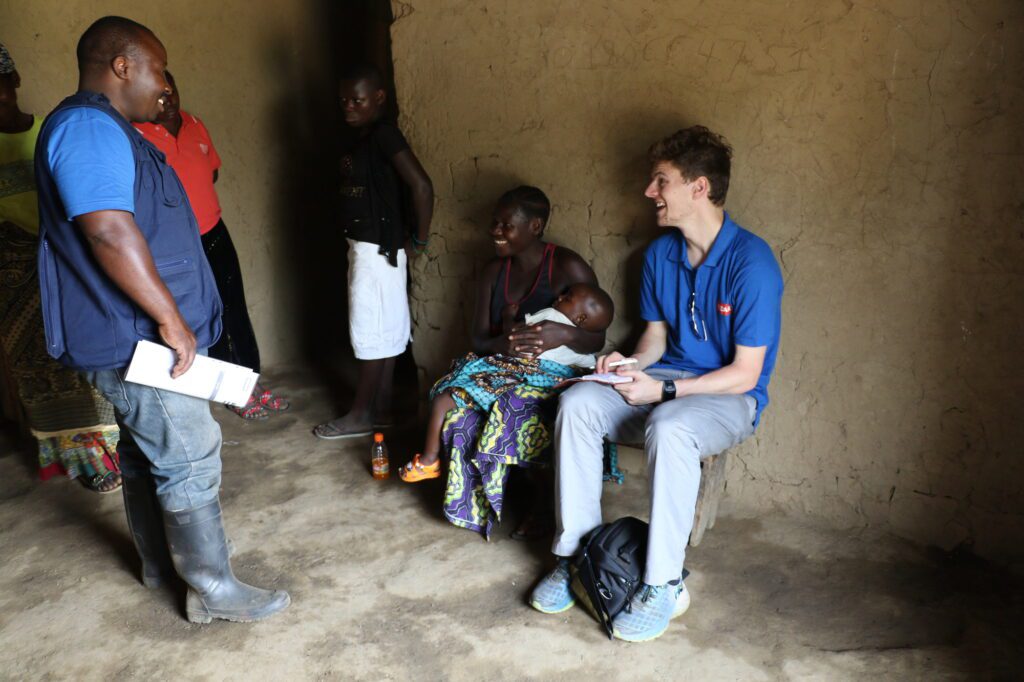 I am pictured here (right) speaking with patients and staff in a Medair-supported health center (2018).

While visiting a health centre supported by Medair in a village called Birundule, I spoke with a lady who was seeking care for her one-year-old daughter, a spirited young girl with thin limbs and a bloated stomach, who smiled roguishly at me when I squeezed her hand between my thumb and forefinger. The lady listened patiently as I struggled to formulate questions in Swahili, before explaining that her daughter had lost her appetite and had stopped growing. I asked where they had travelled from. “Kyaghala, because care is not affordable there and I heard that services here are free.” I asked how long the journey was. “Five hours of walking,” came the reply. The nurse had diagnosed worms and had prescribed a course of six pills to be taken over the course of three days. “Ten hours on foot through dangerous countryside for six pills?” I thought. Phew.

Two years earlier, I had visited the same health centre and had spoken with a patient called Beatrice Amani. She was recovering from severe malaria when we met, and though physically weak, she was optimistic because her condition was improving and she had been strong enough to take a walk around the health centre compound for the first time since arriving three days prior. Beatrice explained that she had fled violence two years earlier and sought refuge in Birundule, along with her aging parents. To support the three of them, she would work in a neighbour’s fields for CDF 1,000 (USD 0.65 at the time) per day. Before fleeing her home, she had never developed malaria, but since being displaced she had experienced four bouts of it. When writing up my field visit report, I remember holding back tears as I realised the bitter irony of Beatrice’s surname “AMANI,” which means peace. 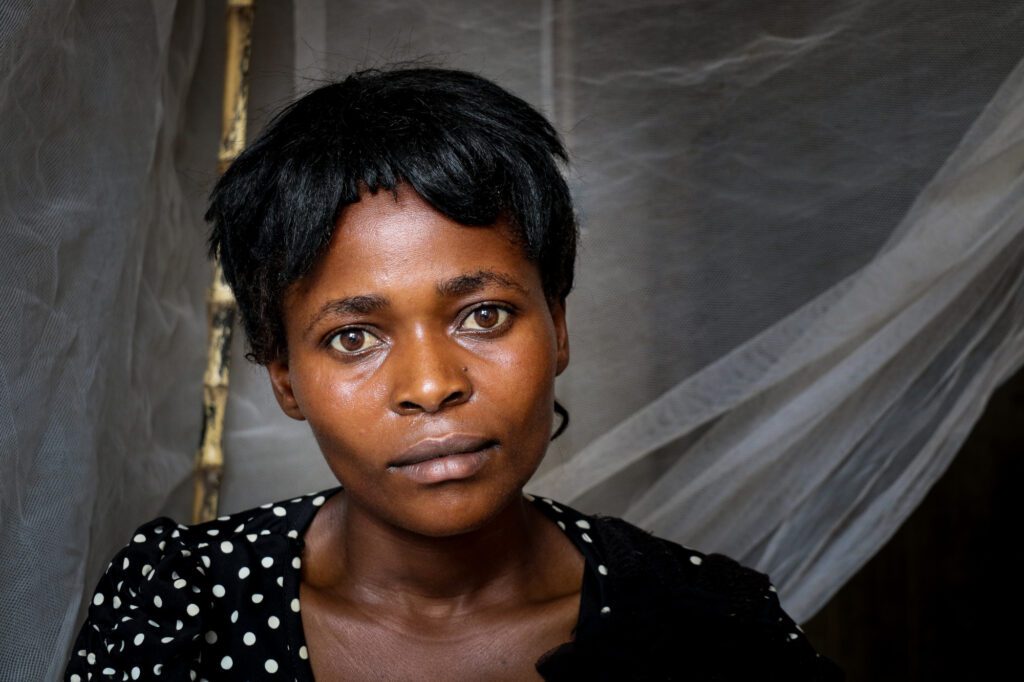 I could go on. I could tell you about Diana, who was cooking a meal for her children when she was hit in the elbow by crossfire as fighting erupted in her home village. I could tell you about Papa Kambale, who lost his daughter to Ebola and then lost most of his possessions when a disinfection team removed them from his house and burned them. I could recall Kabuyuka’s story: a young man of 25 who was seeking treatment for a bullet wound to his wrist – for seven years he had been part of the many small-scale conflicts raging on in the area and couldn’t imagine a future beyond it. Or Odetta, a mother of seven who I met while she was recovering from malaria. She declined my request to take her photo, explaining that she felt ashamed of her ragged, dirty clothes. Or Susa Mabruki, whose husband died of malaria because they couldn’t afford to pay USD 8 for his treatment. 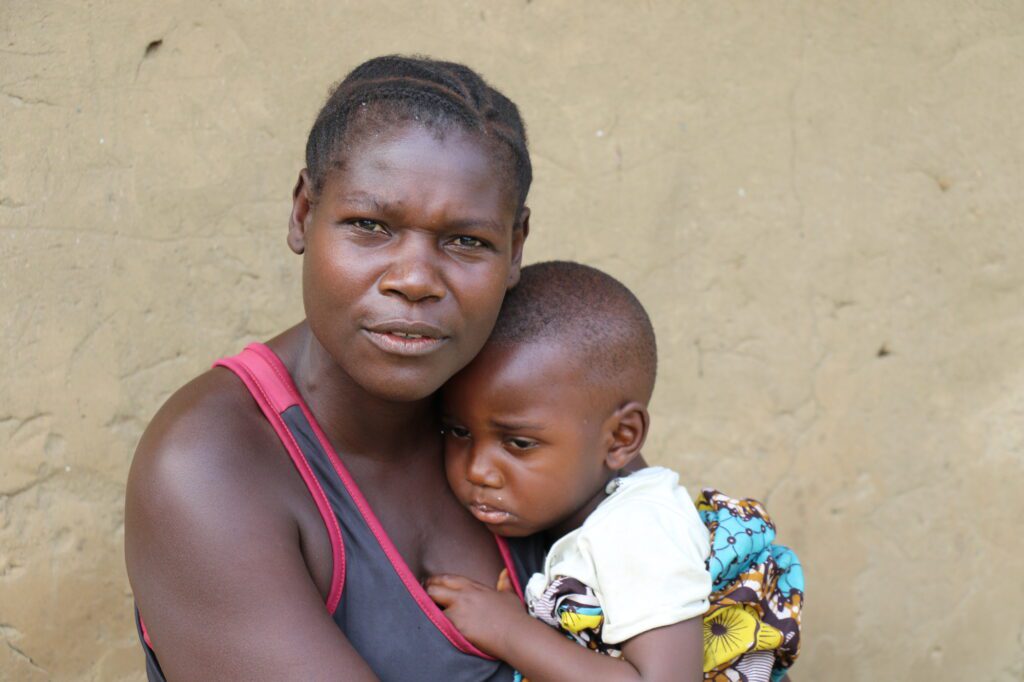 Susa Mabruki holds her youngest son Gerisha. Ill with fever and diarrhoea, he received timely care at a health centre near their home.

Meeting with people who access Medair’s services is a real privilege. It casts into focus my own place in the larger team effort required to deliver these services. It renews my motivation to do everything I can to ensure that when a person encounters Medair’s work or Medair’s workers, that services are the highest possible quality, that commitments are met, and that they are treated with dignity.

Dignity may initially appear a somewhat fluffy concept. Here’s what I mean by it: the humanity of each person is recognised and respected.

As a Christian, I believe that each person is created in the image of God. Each of us bear the hallmarks of divinity. We have enormous intrinsic worth. Consequently, serving another human who is in a position of vulnerability should be seen as a sacred privilege. Dignity is the fruit of an interaction permeated by this perspective.

Medair is an international humanitarian NGO that provides emergency relief and recovery services to families made vulnerable by natural disasters, conflicts, and other crises.  This content was produced with resources gathered by Medair field and headquarters staff. The views expressed herein are those solely of Medair and should not be taken, in any way, to reflect the official opinion of any other organisation.