A Refugee in my Country; Stories from the Conflict

It’s the seventh year of the conflict that started in early 2015 and led Yemen to become the world’s worst humanitarian crisis. To Yemenis, it’s much worse. Yemen already had many issues. The country was one of the poorest and most vulnerable countries in the Arab world. With a population of 30 million people (20.7 million of whom are now in need of humanitarian assistance), Yemen had an underdeveloped health system, water scarcity, and political challenges. Today the country finds itself in a relentless and protracted humanitarian crisis with more than four million people displaced in their own country. 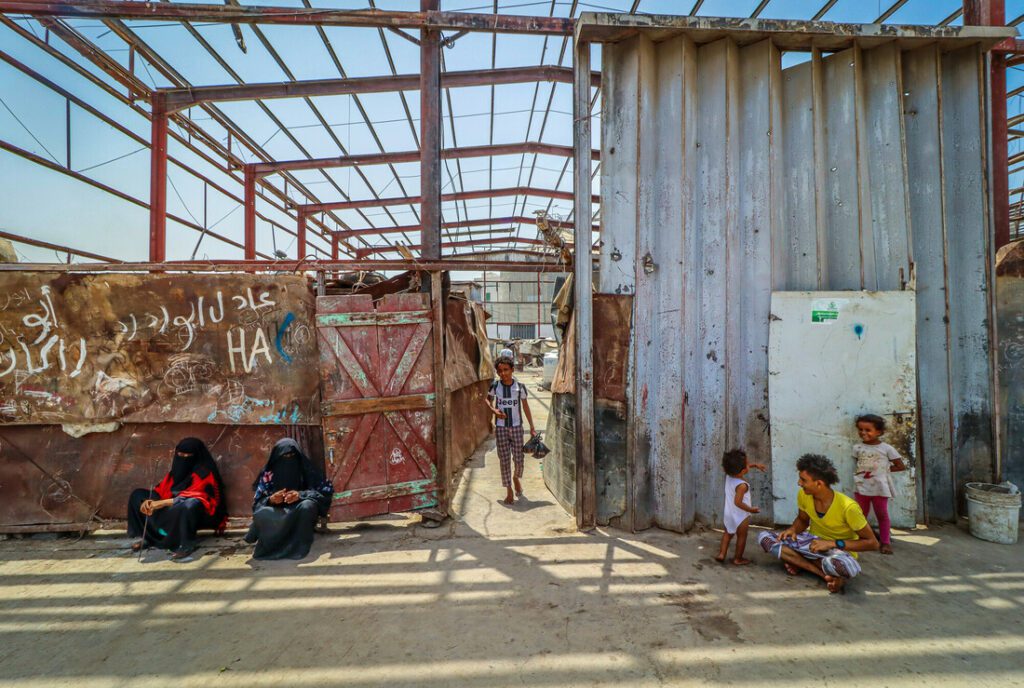 An IDP camp in Aden Governorate hosting more than 350 people who fled villages because of violence on the west coast of Yemen. It is their fifth year in the camp which lacks basic essentials.

More than four million internally displaced people (IDPs) are estimated to live in more than 1,700 sites across Yemen. Only half of those are supported by humanitarian actors. (reliefweb.int) 2022*. Living conditions are harsh. A camp in the middle of Aden city, located inside a destroyed warehouse, is now the home for more than 350 people forced to flee the conflict. Living in tents since 2017, many people lack necessities including shelter materials, blankets, clean water, and latrines. The temporary shelters are constructed from bushes and branches from the desert, or plastic sheets and other salvaged materials from rubbish dumps. Safe drinking water is either scarce or available in very limited quantities. In this dusty environment, many people live without latrines and showers. 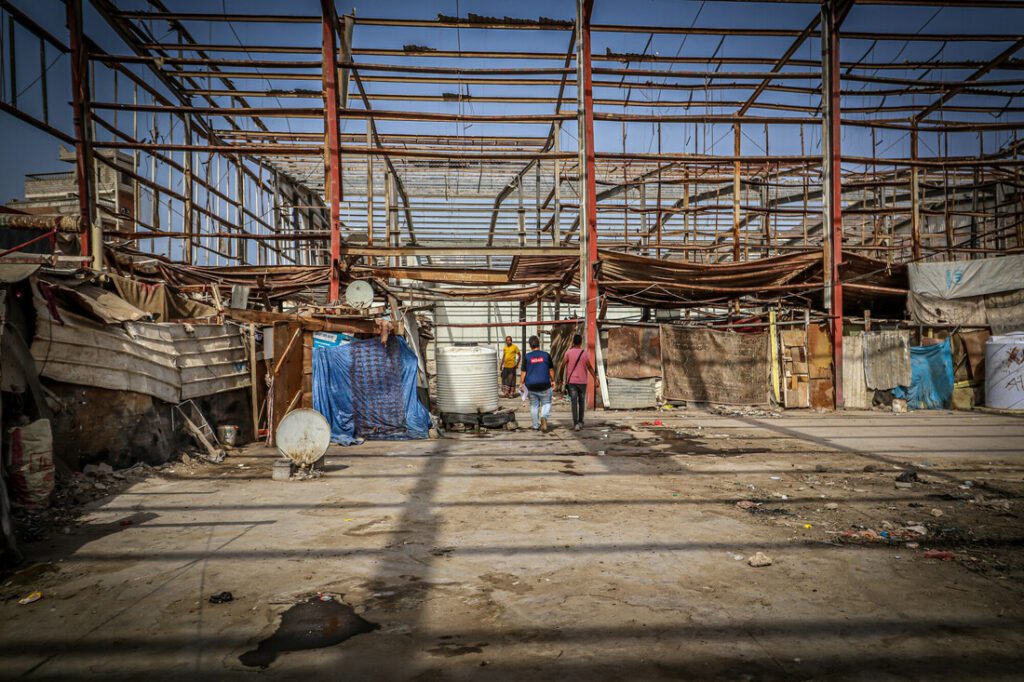 A food warehouse destroyed in the conflict is now home to IDPs. Medair’s BCC team visited the camp to conduct an awareness campaign and coordinate a cleaning campaign

“We don’t have blankets to cover ourselves from the sun and the heat,” says Salama, one of the thousands of internally displaced people who have sought refuge in Yemen’s Aden Governorate from conflict zones on the west coast. “My kids don’t have warm clothes and I don’t have enough food to feed them. I don’t have a brick house. It’s just a tent that doesn’t stop the wind or protect us from the sun, especially in the summer when the temperature goes above 40֯ degrees. I just complain to God.” 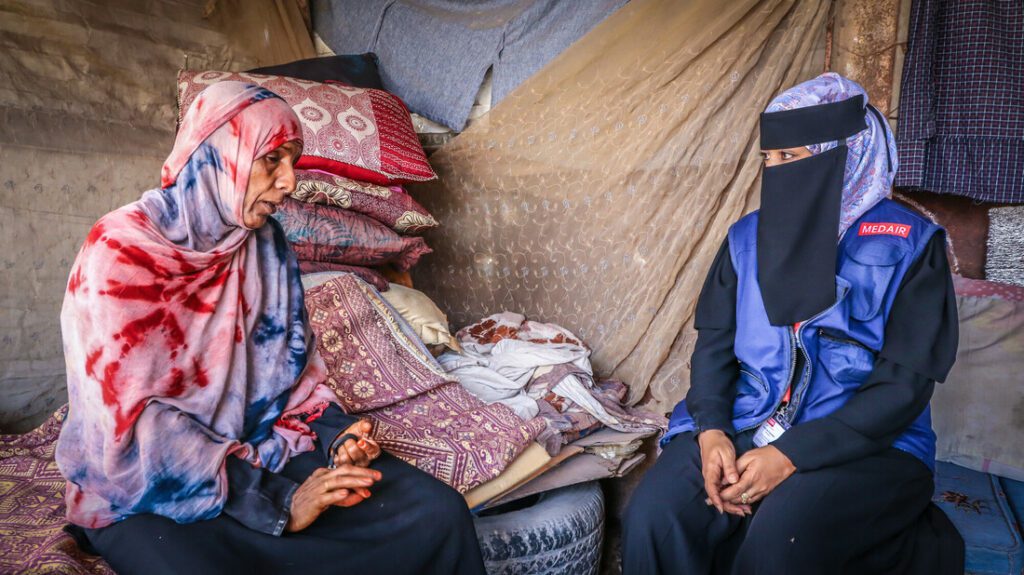 Salamah, 68 years old and an elder member in the IDP camp is the mother to five children. “I have live here since 2017 and am still in shock that I have almost lost everything including my house and our work. I always wonder when I can go to my village.”.

“The situation in Yemen is unpredictable. We were hoping that this year we could return to our village, to our life, because the landmines were finally removed, and the front line is very far now. But at the beginning of this year, our little town become a battleground once again and our hope to return faded. It was shattering for us.” says Ameen the representative of the camp of Mualla in the governorate of Aden. The escalation of conflict continues to deteriorate the protection space for civilians and force thousands of families to seek refuge elsewhere. There are more than 50 active frontlines across the country. 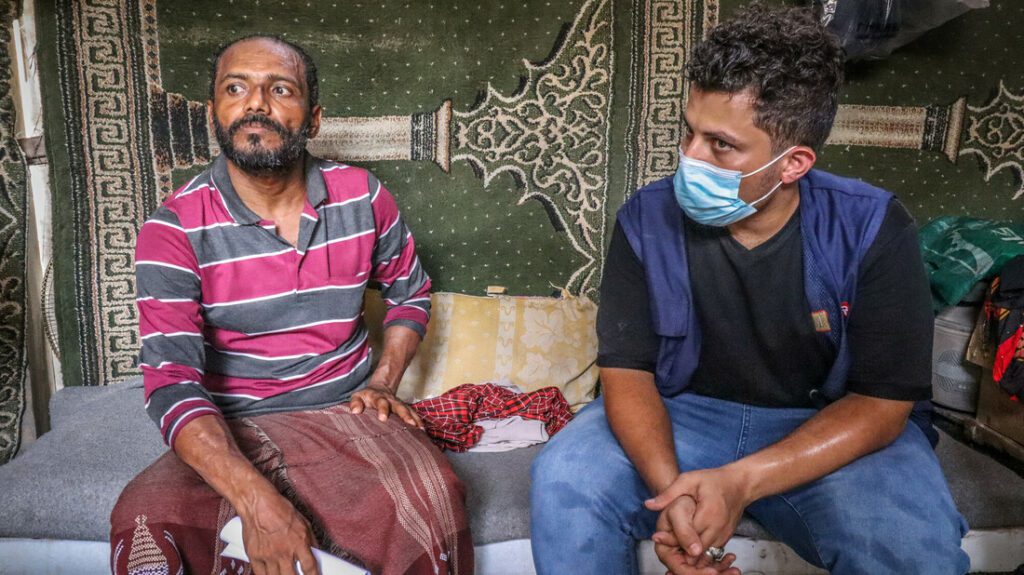 “As a representative of the camp, I know all the problems people go through; how they feel, what they have lost, how they are living here. No one wants to live in camp but we have to and that’s why I always try to get as much support I can get for the people so I can provide relief somehow.” Ameen, 33 years old, and community hygiene volunteer with Mahmood, Medair’s WASH BCC Officer in the IDP camp in the governorate of Aden.

“The conflict has changed our way of living. Now we just try to survive these conditions. It’s not easy to lose everything in a moment. I used to make local sweets in my town on the west coast of Yemen and I used to work as a social worker. Now I am just a man living in a tent trying to help my community who are victims of this conflict. It’s an entire generation that has no future because kids can’t go to school. It’s a luxury their parents can’t afford. Most of the people in the camp eat one meal a day or two if they are lucky and if someone is sick, he can’t afford to buy medicine. It’s a helpless situation even for the people who are not displaced like us. The country’s economy has faltered, its currency is in free fall, and food prices have doubled since the beginning of the conflict,” says Ameen, 33 years old and the representative of the camp of Mualla in the governorate of Aden. 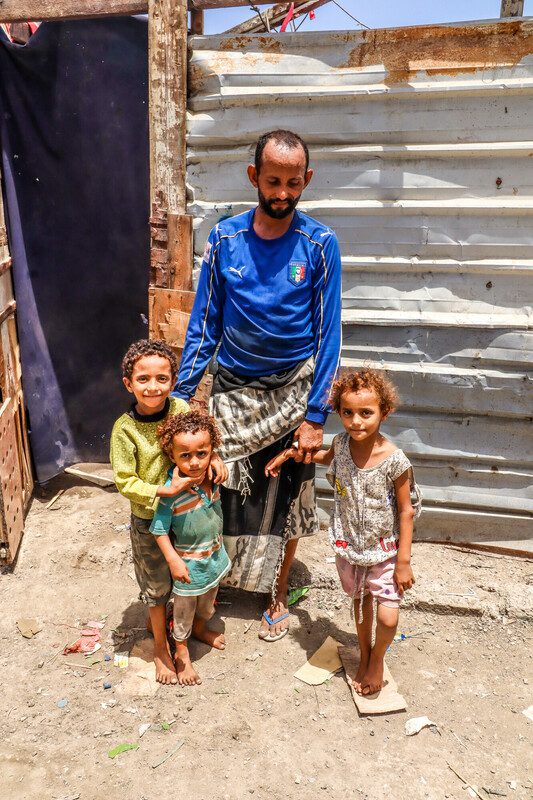 “I am living here for five years now. I had to flee my house with my two kids, they were babies. Back then, my wife’s entire family was killed because of landmines while they were going back a year ago to see their house condition after the clashes stopped. I now am taking care of their small children with my family. I don’t have the words to describe what is our conditions. We are just barely living.” Abdullah is 32 years old and lives in the IDP camp in the governorate of Aden

“I am waiting for humanitarian assistance to arrive so I can support my family because my work will not be enough to feed my kids. It has been a month since I and my family had a proper meal. We would take anything given to us as help and for now, we only take tea and bread all day long.” Abdullah, a father of three children and a resident in the camp since 2017, escaped his village because of clashes that killed his brother-in-law and his wife in a mortar shelling targeting their village. Now he is afraid to go back and, if he returns, he will not find work. Most of the village is ruined and abandoned.

The region of the west coast which is the homeland for the IDPs is originally poor and has a lack of infrastructure and services. Most people work in fishing and agriculture. The conflict has brought more misery to the people than they could imagine as Salwa says, “We were happy with our little farm and thanking God that we ate every day and had a small house. Now it’s lost.” 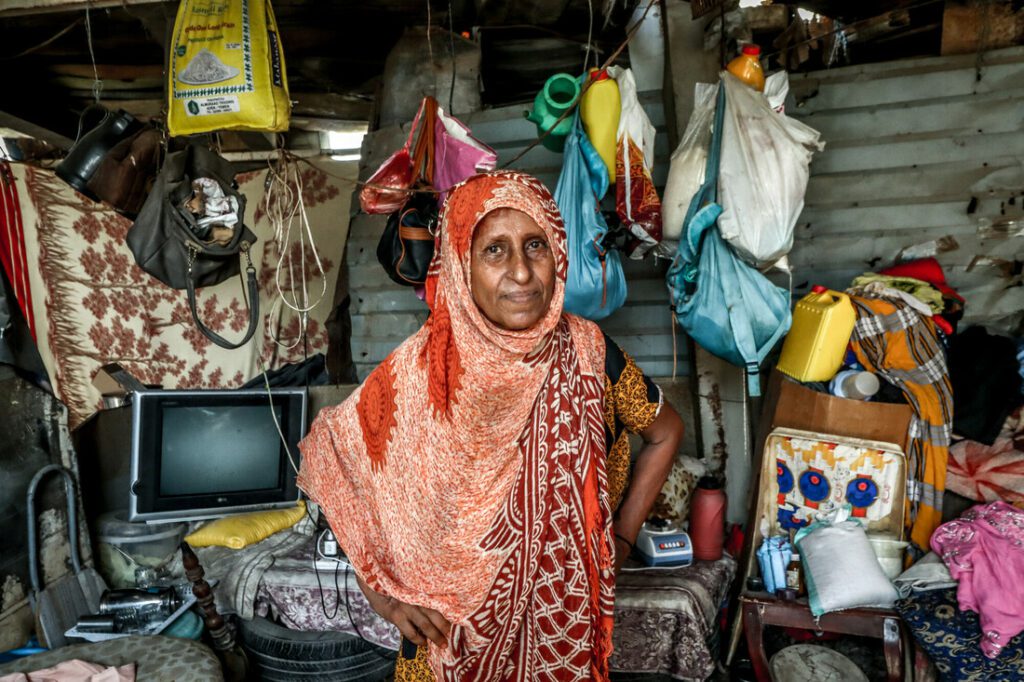 Lady Salwa, “When I fled to Aden, I and my family had to hide on my sister’s farm for two days because our village had become a battlefield. We lost my sister who was hit by a bullet and we couldn’t do anything for her.”

“I don’t know why the conflict started or why my sister got killed horribly. What was her fault? She didn’t do anything. No one understands our situation and what we are going through. It’s so hard but we are living by helping each other. No one wanted this life. It came to us. For me, I can handle it but the kids can’t. They need a clean place. They need to study in school. They need to feel safe and they need to be fed. That’s why the conflict must stop. We are citizens of this country, not refugees.” 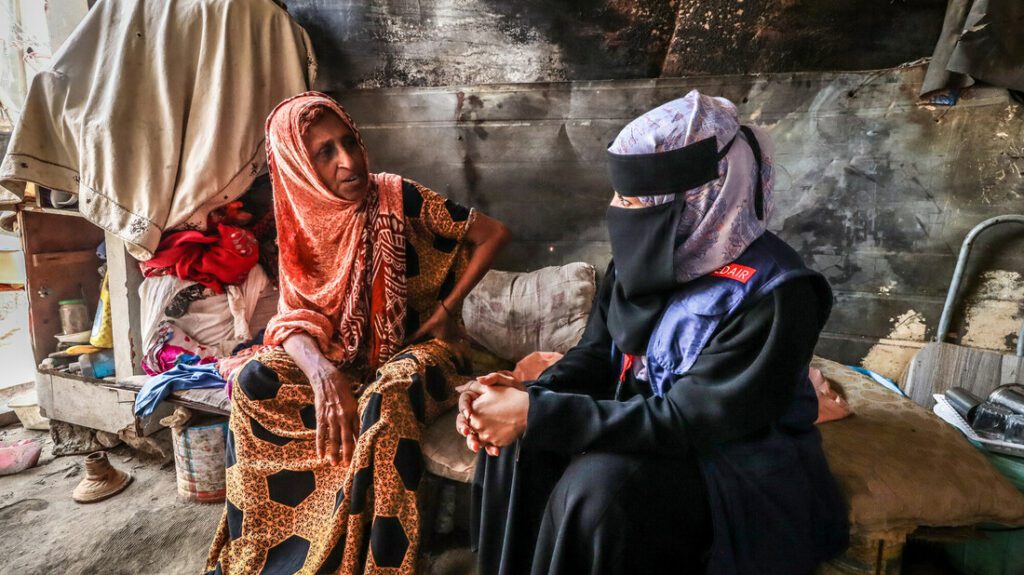 “I hope people understand what we are going through living like refugees inside our own country. It makes me sad. It’s the conflict that let us just escape with just our lives leaving everything behind. I appreciate the help we get but nothing is like home.” Salwa,56 years old.

Since 2015, the UN estimates 233,000 civilians have been killed by the conflict, including over 130,000 people who have died because of lack of food and essential services destroyed by the conflict. Across the country, humanitarian needs remain acute, and the protective environment has deteriorated. Few Yemenis can reliably access safety, security, and their basic rights – a challenge that is especially difficult for those who have been displaced by violence (www.CFR.org) 2022* 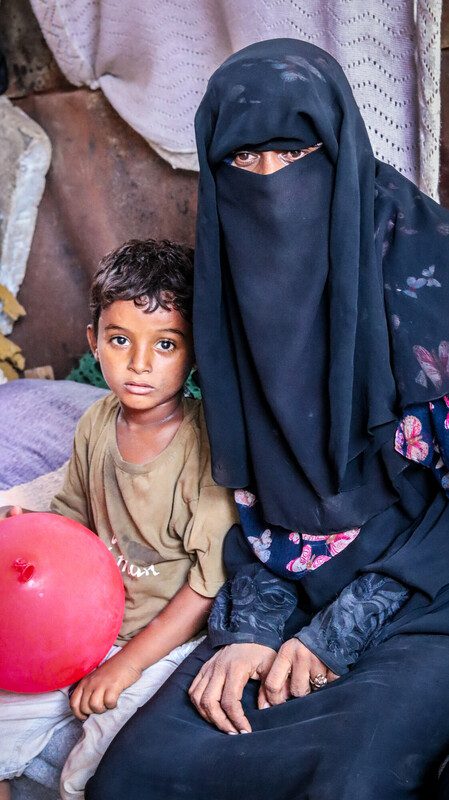 Fatima, 30 years old, has been living in the camp since it was established in 2017. “I got hit by a bullet in my cheek while I was collecting the potatoes on our farm and our house got hit by mortar shells and my sister and my father were killed. Now am taking care of my sister’s son. I hope the situation gets better so the kid can get a normal life in a house, not in a tent.”

“In my life, death became a familiar event and it took whatever remaining hope away after I got hit by a mortar shell and lost my father and sister while we were collecting potatoes on our farm. It was time for lunch, and I was injured. The villagers took me to a health facility, and it took me three months to recover. I couldn’t return. The road was full of landmines. I couldn’t see my father and sister for the last time. I arrived in this camp with one of my friends and it is home for me with my sister’s son who lost his mother when he was just three years old,” says Fatima, a member of the IDP camp, Mualla, in the governorate of Aden. 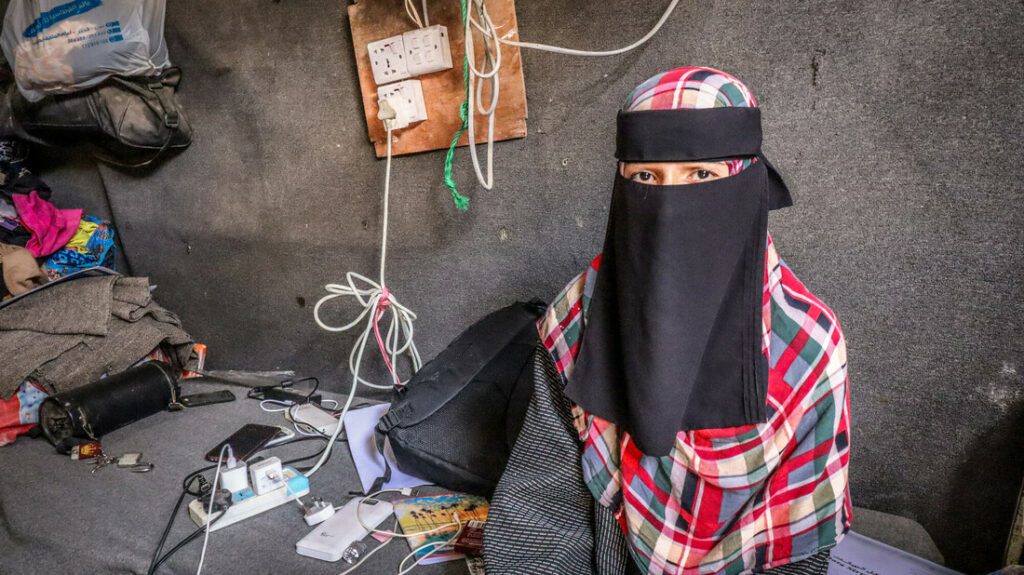 Zamzam, 30 years old, “I still have nightmares about the night our house and neighborhood got hit with mortar shells. My friend was killed, and many people were injured. We did nothing yet we lost everything. I got here with my sister. Part of my family went to another camp in Al-Hodeida. We hope the conflict ends so we can get our life back.”

“We are all suffering and, as women, we suffer more. We don’t have a proper shelter or water resources or a clean environment to live in and being the only woman in this camp who is educated, I took the responsibility for keeping the camp clean with the help of NGOs such as Medair. Medair provides us with essential hygiene kits and cleaning materials to keep the environment clean and after the awareness campaign, the residents of the camp are becoming supportive. We clean our camp weekly so we can prevent any disease that will increase our problems. We escaped the violence to only fight the hard-living conditions. We hope to go back and build our lives once again. May God have mercy on us, and the conflict stops.” says, Zamzam a member of the IDP camp, Mualla, in the governorate of Aden

Raging clashes continue to deteriorate the protection space for civilians and force thousands of families to seek refuge elsewhere. There are over 50 active front lines across the country, with over 157,000 individuals in 2021 alone, particularly in Marib, Hudaydah, and Taizz governorates. (reliefweb.int) 2022*

Medair is providing essential nutrition and health care, and water, hygiene, and sanitation services to the communities in Yemen.