You could see the smoke for miles.

On the afternoon of Monday, 22 March 2021, a massive fire tore through Kutupalong Refugee Camp in Cox’s Bazar, Bangladesh. Flames ate through the plastic sheeting and bamboo-pole structures in seconds, filling the sky with plumes of black smoke. The fire spread rapidly. People grabbed what they could and ran, carrying elderly relatives, children, or the few possessions they had in their arms. Families were separated in the rush to outrun the flames; days later, children are still searching for parents, and spouses are trying to find their significant other.

Kutupalong Refugee Camp is home to around 700,000 Rohingya refugees, according to the United Nations (UN). Official UN figures indicate that around 45,000 Rohingya refugees were affected by the fire. Tragically, the confirmed death toll is 15, and hundreds of people are still missing. More than 500 people sustained injuries.

Even though days have passed since the fire, smoke can be seen rising from the smouldering remains of burnt tents; in some places, the flames – weaker and feebler now – are still burning. The acrid smell of burning plastic hangs heavy in the air; underfoot, a mix of dust and ash sticks to shoes and finds its way into folds of fabric.

‘This fire has had a devastating impact on families who have already lost everything,’ says Rachel Hirons, the Country Director for our Bangladesh programme. ‘We’ve been in the camps since the fire and the destruction is terrible. We are all desperately hoping that this is not the straw that breaks the so far unending resolve of the Rohingya people living here.’

Humanitarian responses to the fire began almost immediately. Our shelter team was in the camp less than 24 hours later delivering essential supplies like tarpaulin, face masks, and bamboo poles to families affected by the fire. By the end of the week, we had delivered shelter and hygiene kits to more than 700 families, and are delivering more. Other organisations have established reunification centres to connect loved ones, or are delivering emergency health services.

But the crisis extends beyond providing immediate relief. The monsoon season is coming, bringing worry not just about how Rohingya families will find shelter, but also how the hilly landscape will hold up against the rains, now that the sandbags and bamboo poles that once held the earth in place are gone. There are concerns about COVID-19 as well: Bangladesh is currently experiencing a spike in cases. A coordinated relief effort will be needed in the months to come to ensure that families can recover with dignity and keeps them safe from harm. 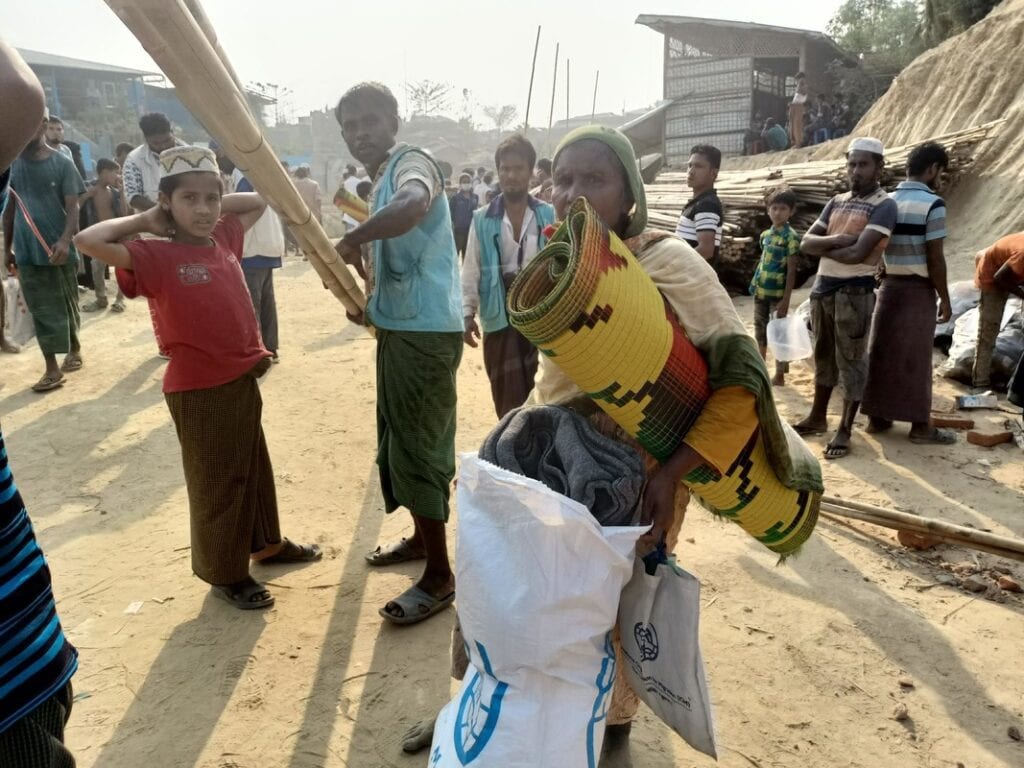 Two of our colleagues who live near the camp lost their homes in the fire, and many of the Rohingya refugee volunteers – who help us deliver training on topics like handwashing and breastfeeding to families living in the camps – have been affected.

For many of the Rohingya refugees affected by this fire, this is not the first time they have lost everything. Many arrived in Bangladesh in August 2017, fleeing horrific, unimaginable violence in neighbouring Myanmar. Today, Bangladesh hosts around 860,000 Rohingya refugees, according to the UN. Many have lived in shelters made from plastic sheets and bamboo poles for the last four years.

We will continue to stand by the Rohingya people to help them recover from this latest crisis.

Medair is an international humanitarian NGO that provides emergency relief and recovery services to families made vulnerable by natural disasters, conflicts, and other crises. In Bangladesh, Medair works in partnership with World Concern.