Treating Patients Has Never Been Enough: The Ebola Outbreak in DR Congo Climbs to Over 2,000 Cases

The Ebola outbreak in DR Congo has now recorded over 2,000 confirmed and probable cases. Despite the commitment and tenacity of Medair and other responding NGOs, the number of people infected with the deadly Ebola virus continues to accelerate. The first thousand cases were recorded over nearly eight months, while the second thousand have emerged in less than two-and-a-half months.

The Ebola outbreak in DR Congo has now recorded over 2,000 confirmed and probable cases. Despite the commitment and tenacity of Medair and other responding NGOs, the number of people infected with the deadly Ebola virus continues to accelerate. The first thousand cases were recorded over nearly eight months, while the second thousand have emerged in less than two-and-a-half months.

When you think about the people who respond to Ebola outbreaks, you likely picture nurses and doctors in protective equipment, treating Ebola patients. These nurses and doctors are very much at the Ebola frontline, giving their all to save the lives of patients. Yet there is much more going on behind the scenes.

An effective, cohesive Ebola response system relies on screening, referral, treatment, vaccination, and infection prevention and control, all linking seamlessly with community-based prevention and disease surveillance. As response efforts continue in DR Congo, it is crucial that people in affected areas are treated with dignity and empowered to adopt preventative measures. An end to the outbreak can only be realised by and through the Ebola-affected communities. 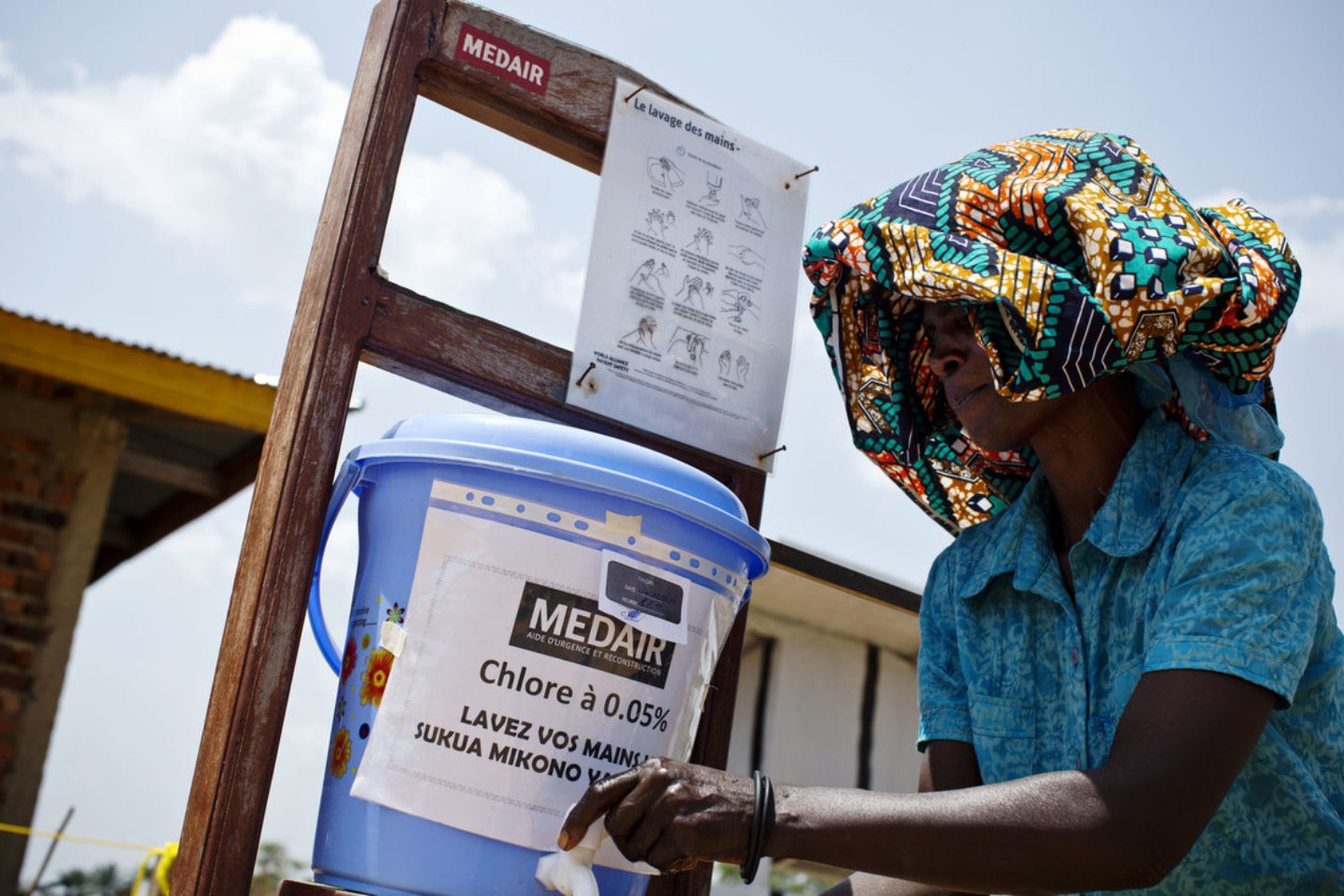 A woman washes her hands at a handwashing station supported by Medair. © Kate Holt / Medair

During the Ebola crisis in West Africa, case rates only declined when communities embraced key prevention measures and put them into practice. While isolating and treating patients continued to be supported by responding organisations, much of the work to end disease transmission was accomplished in villages and neighbourhoods. Neighbours changed their mode of greeting, mothers reminded their children to wash their hands, and families adapted their burial customs. They were the true change makers. Responders in DR Congo would do well to remember this. 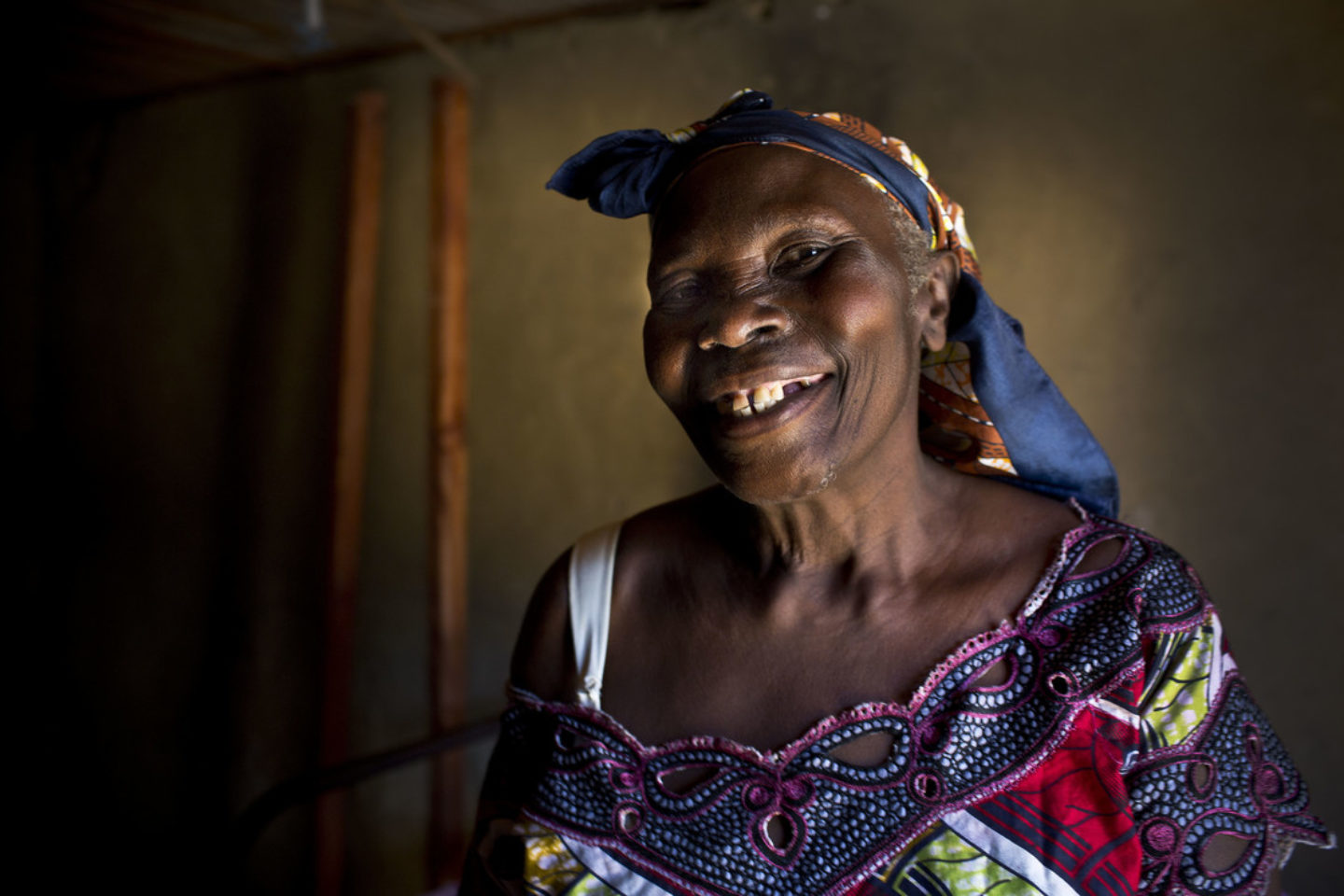 Agwandia Jermanine is an Ebola survivor who believes in the importance of actively involving the community in Ebola prevention and response. This strong, vivacious 65-year-old woman is a traditional healer in her community. When Medair hosted a traditional healer session to engage this key group of community leaders on Ebola, someone asked, “How do you know if Ebola is real?”  Agwandia stood up and declared, “I know Ebola is real, because I had it.”

Community members like Agwandia are critical to effective community-led engagement that allows for open dialogue. Engagement that is predicated on trust will lead to communities being able to hear about life-saving Ebola prevention measures and be empowered to adopt changes that are appropriate for their own communities. 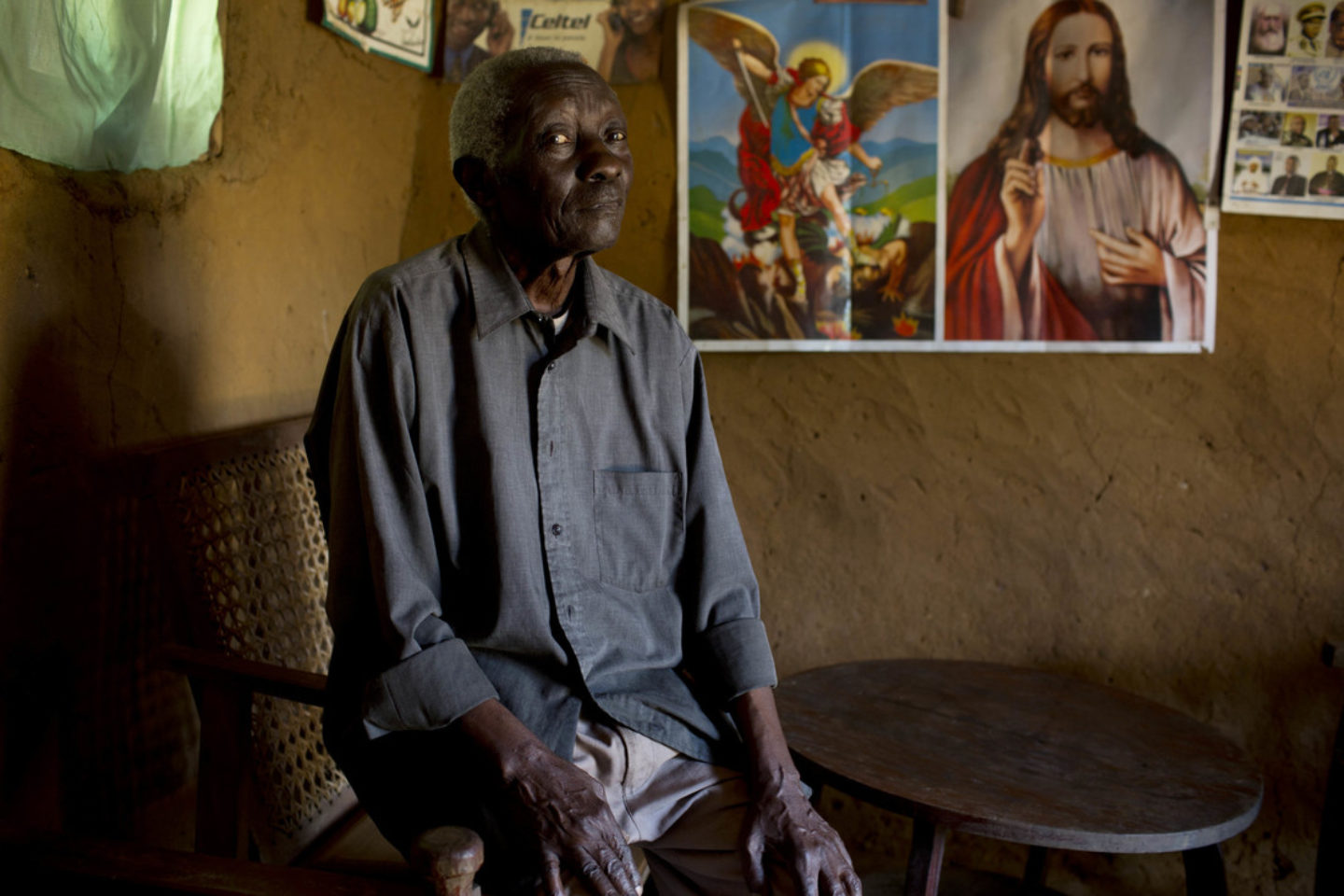 The daughter of Papa Kambale died in January 2019. His daughter lived with him and helped to look after his three orphaned grandchildren as well as supporting him financially. © Kate Holt / Medair

The importance of community engagement has been increasingly recognised following high-profile attacks on Ebola treatment facilities in February. These attacks violently demonstrated that acceptance of the Ebola response has not been achieved in many communities.

Gains in trust are made through prioritising dialogue, favouring local recruitment, and listening to all the needs expressed by communities, not just Ebola-related needs. Yet gains in trust are undermined by civil-military relations that depart from humanitarian principles and deepen suspicions held by community members: “If it’s really a disease, then why did the ambulance show up with a group of police? To me, it looked more like an arrest.”

Two key compromises can help Ebola responders avoid using military escorts as a means to achieve secure access.  Firstly, organisations can work with partners who have a pre-established relationship with communities in the area and can achieve access without escorts. Secondly, organisations can accept a delay to access, requesting that community leaders travel to meet with them, to engage in discussion about what kind of access or activities would be acceptable. This way, the organisation becomes an invitee of local leadership, rather than an intrusive presence. 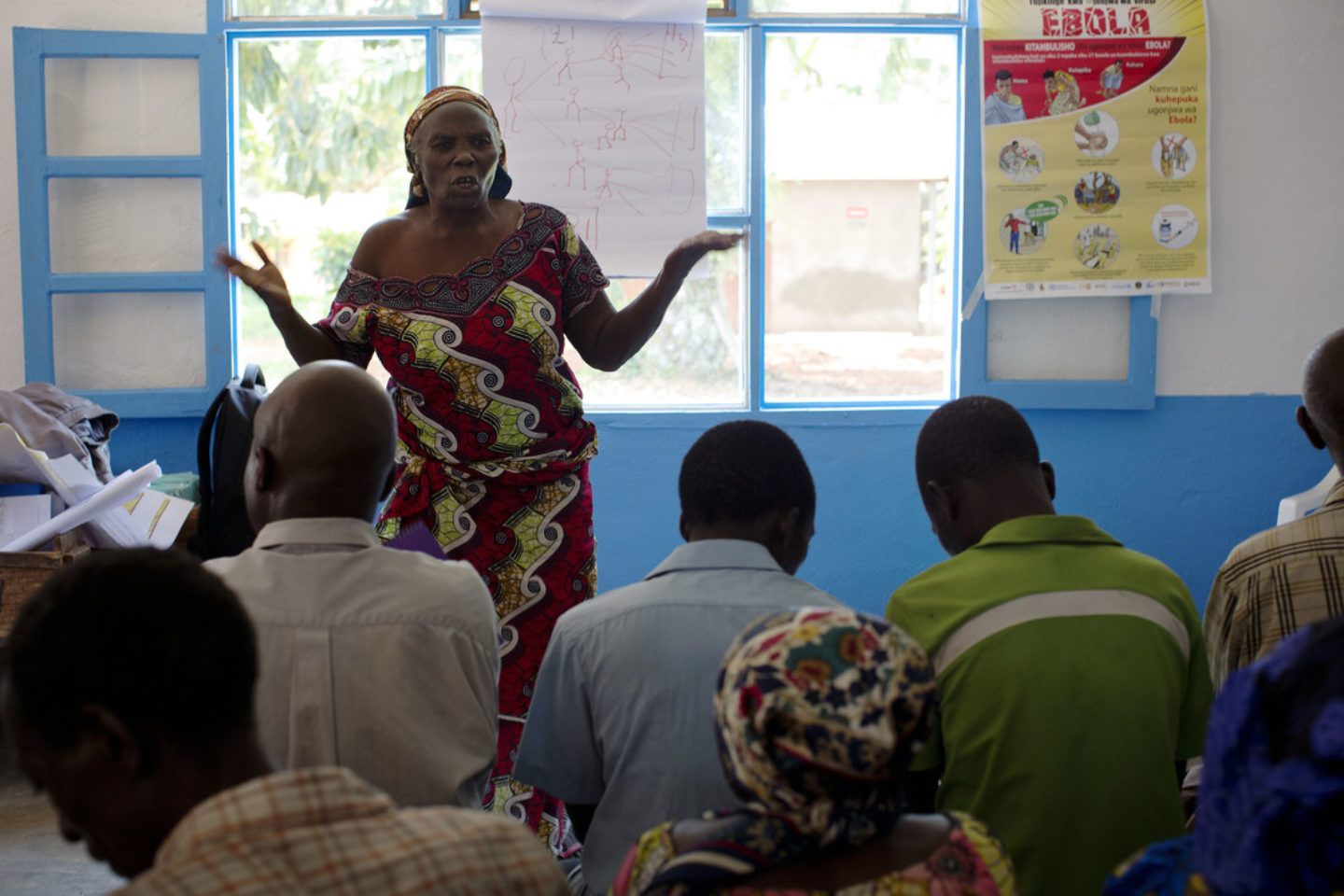 There have been some encouraging recent developments. Recently, the Inter-Agency Standing Committee – the primary mechanism for inter-agency coordination of humanitarian assistance – recognised the gravity of the Ebola outbreak in DR Congo, and declared that the Ebola crisis is in a need of a major scale-up, activating the highest international alert. One of the priorities of the scale-up is enhanced community engagement as well as improved coordination.

Medair welcomes the activation of the highest level of emergency response. In doing so, we urge the Congolese government, international policy makers, and donors to wholeheartedly support response work, while scrutinising its quality and focus.

A bespoke community engagement strategy needs to be front and centre. It’s crucial that we sensitively equip and mobilise communities to protect themselves. Ordinary Congolese people are the most gravely affected by the outbreak, and consequently, must be the most strongly involved in the response.

High-level global shifts in the Ebola response are encouraging, just as there are encouraging local initiatives that happen each day. One such example is a local dance group in Beni City. When the group witnessed the outbreak spreading from its source in Mabalako into Beni City, they created a routine to raise awareness about the disease. They asked Rebecca Langer, a Medair Health Project Manager and keen dancer, for advice on choreography. Medair has since involved the group in community engagement sessions in neighbourhoods badly affected by the outbreak, particularly where there is a need to better engage with youth. The initiative and sense of ownership demonstrated by this kind of group must be celebrated, and replicated wherever possible. Engaging with the community is really the only way to achieve a swift end to the outbreak.

In response to the Ebola outbreak, Medair supports over 70 health facilities in Eastern DR Congo, with Health, Nutrition, and Water, Sanitation and Hygiene (WASH) and related interventions.