“In seconds, the blast pushed me from my kitchen and I found myself on the floor of my living room. The force of the blast blew up the gypsum wall and the windows from behind me. It fell in pieces all around. After all, I’m alive. I may be mentally tired and need more time to process the tragedy, but I know very well that God protected me, my faith protected me.” – Marionela, Beirut Blast Survivor.

On August 4, 2020, at exactly 6:07 PM local time, one of the world’s biggest, non-nuclear explosions took place in Beirut, the capital city of Lebanon. The explosion destroyed much of Beirut’s port and ripped through the heart of the city, taking with it more than 200 lives and leaving 7,000 people injured. The shockwaves that resonated across the city stripped hope and homes from the people of Lebanon.

At the time the tragedy struck Lebanon, the country was already battling the COVID-19 pandemic, political unrest, and a dire economic crisis that had seen its currency plummeting, massive layoffs, and drastic banking restrictions. The country was left in a state of shock, and what was once described as ‘Switzerland of the Middle East’, was left looking like a scene from an apocalyptic movie. A cloud of black smoke was left lingering for days over the city of Beirut, with its residents searching destroyed buildings for family members, pets, and belongings. Crowds of people gathered on the streets trying to remove the pieces of what they once called a home but which was now broken rubble. 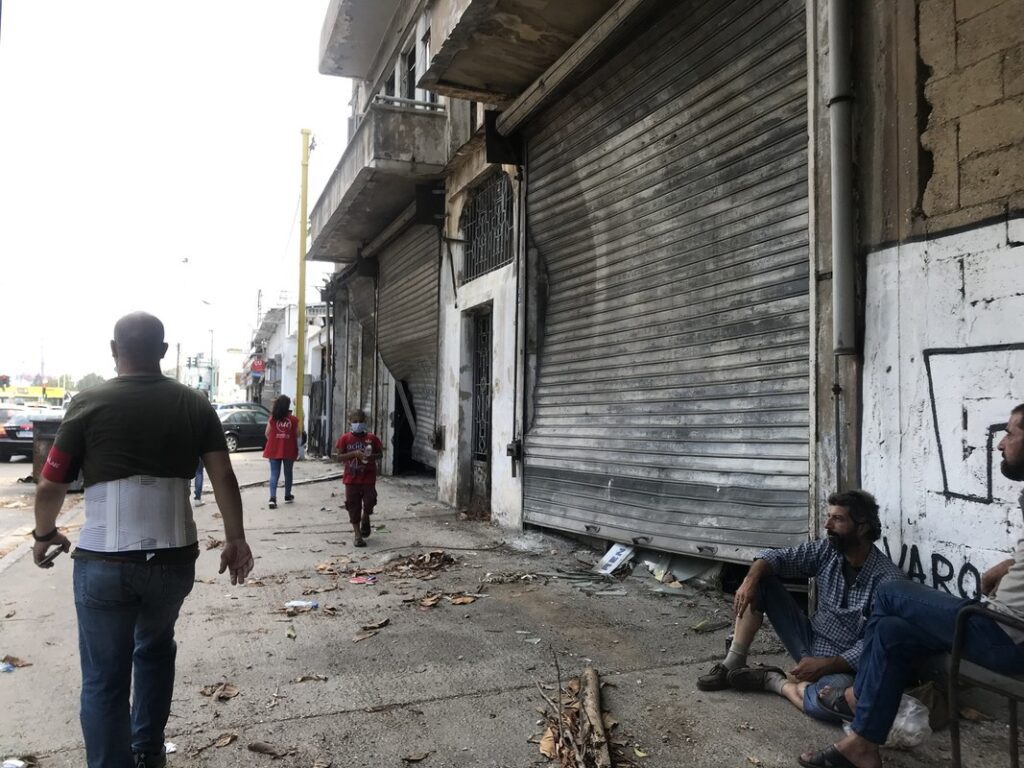 Even bread is becoming scarce

Lebanon hosts more than one million Syrian refugees, giving it the highest number of refugees per capita of any country in the world, according to the UN Refugee Agency. With the Syria crisis now approaching 10 years, much of the humanitarian response in Lebanon has focused on supporting refugees and vulnerable Lebanese families. But the situation has gotten much worse since the explosion. The tides have shifted; the situation for Lebanese families has worsened. Communities that have been hosting Syrian refugees in Lebanon are now facing a crisis of their own.

“I wanted a better future for my kids, so I sent them away a long time ago. My only worry now is how am I going to survive this period of time in Lebanon. It has been really hard for small businesses to make a profit now n’ days. The exchange rate has made it extremely difficult for us to keep our businesses open. We need support, any kind of support – we need it and we cannot do this alone.” says Ibrahim.

In the year since the explosion, the economic, political, and social crises have only intensified. Adding to this, the country has now been hit by a severe fuel shortage. Businesses and hospitals have been paralyzed by power cuts up to 20 hours a day. Intermittently and without warning this once-thriving country is plunged into total darkness. People are queuing for hours in the blistering heat just for small amounts of fuel for their cars. Tourists, so vital to the economy, are met with temporary closure signs on Beirut’s famous restaurants, cafes and bakeries, and now even shopping malls. Even the famous Lebanese pita bread is in short supply because of the fuel and electricity shortages. No aspect of life in Lebanon is untouched by this crisis. Medications are scarce and some pharmacies have been forced to close temporarily.  According to UNICEF, more than 71 percent of the country’s population is expected to lose access to safe water in the coming month.

So, what are we doing?

These are challenging times in Lebanon – both for our colleagues and their families, and for us as an organisation as we navigate how to respond to this increasingly complex crisis. As an organisation we have years of experience responding to complex humanitarian emergencies, including places like South Sudan, the DR Congo, and Syria. Emergencies are never just one single problem, and when a community is made vulnerable, the road to recovery is often long and rarely straight.

In the year since the explosion, we’ve seen an increase in the number of Lebanese families needing support for health care and basic needs has drastically increased. Their strong commitment to helping others is being stretched by the needs of their own families. We are just as committed to Lebanese families as we are to Syrian refugees.

Medair, an international humanitarian organisation has been working in Lebanon since 2012, providing health, mental health, and shelter support to refugees and vulnerable Lebanese families in Beirut, South Lebanon, and the Bekaa Valley. Following the Beirut explosion, Medair repaired shelters and offered psychosocial support to families affected by the explosion. Since June 2021, our response has expanded to address new critical needs in primarily Lebanese communities, including a free COVID-19 vaccination clinic in Saida, South Lebanon.

Medair’s work in Beirut, Lebanon is made possible by the support of United Nations High Commission for Refugees, Swiss Solidarity and generous private donors. Since June 2021, Medair has also been running a COVID-19 vaccination clinic in Saida, South Lebanon with the support of Swiss Solidarity. Support of the health clinics in the Bekaa Valley are supported by Global Affairs Canada in partnership with Tearfund Canada.