When Chris Cooper visited Kenya on a running vacation in 2017, he couldn’t have predicted that his whole life would change as a result of his experiences.

As the single dad of a young boy, Chris saw classrooms sitting empty in rural schools and he knew that children were missing out on education that could improve life for their families. He learned that providing meals would lead to improved attendance.

When Chris Cooper visited Kenya on a running vacation in 2017, he couldn’t have predicted that his whole life would change as a result of his experiences.

As the single dad of a young boy, Chris saw classrooms sitting empty in rural schools and he knew that children were missing out on education that could improve life for their families. He learned that providing meals would lead to improved attendance.

On returning home to the UK, he formed a company, Runners Heal, where proceeds from the sales of shirts provide rice and beans for school classrooms, all grown locally in Kenyan communities. As the company grew it became his full-time focus and now nearly 500,000 meals have been provided to school children. The shirts, labelled ‘We Run This’ are shipped around the world and worn by elite athletes, casual joggers, and people who have joined the movement to feed school children. Along the way, with many return trips to Kenya as well as Uganda and Ethiopia, Chris has become involved with other humanitarian projects. He recently visited Medair in South Sudan to learn about the high rates of malnutrition.

Chris visited our programme in Renk, where children and pregnant and breastfeeding women are treated for malnutrition. He also spent time with a group of women who teach their community about health and hygiene. Chris arrived at the height of the rainy season, when crops are not ready for harvest and families have little income for purchasing food. Renk, in the far northeast of South Sudan adjacent to the Sudan border, has been affected by border closures which lead to food shortages and price increases. As a photographer, Chris was also taking photos of the work for his social media followers.

Not only was this your first visit to South Sudan, but also the first time you visited a Stabilisation Centre where the children are severely malnourished and have medical complications. What were your first thoughts?

Almost immediately I saw Mosab. He was painfully thin and his legs looked purple. He was crying; more like moaning actually, and was just listless on the lap of his mum Rehma. I learned that, because of being malnourished, his skin had become so dry it was peeling, and the purple-coloured ointment had stained his legs. I could see the challenge that Medair staff had on their hands, and Mosab was just one of their young patients.

What were you thinking as you photographed Rehma and Mosab in the Stabilisation Centre?

I struggled with taking photos; I was immediately focused on what I could do to help.

Jimmy, the manager of Medair’s clinic, actually asked me to take some photos. He told me that sharing the images and stories is important to help people understand the situation in South Sudan and to see the reality.

Rehma agreed to the photos, and now, when I look at them, I’m glad to be able to share the situation. Definitely, though, my first emotions were those of a father; not a photographer.

Tell us the story of this family

I saw many women in my three days in Renk— in the delivery centre, and with their children in the Stabilisation Centre. They were always on their own; not with their husbands.  They sometimes stayed at the Stabilisation Centre for a full week, getting the best care for their child who was seriously ill. I learned, though, how worried they were for the children they had left at home.

I immediately warmed to Alnor. He was the only father I had seen all week. He sat at the bedside of his wife and child and I wanted to make sure he knew how much I respected that. He shared jokes with me, and he and his wife asked me to take a photo of their family.

What did you learn about water and malnutrition in overall humanitarian aid?

During the past two years I’ve been invited to many regions within East Africa and I’ve learned so much about the challenges people face. This trip with Medair really opened my eyes to the direct relationship between clean water and malnutrition.

Like most people, I assumed malnutrition was caused mainly by a lack of food. In fact, water and hygiene play a big part overall, especially for young children. Without access to clean water and proper hygiene, children are susceptible to diseases. When they don’t have nutritious food, they have a harder time recovering and become weaker, which  leads to the onset of acute malnutrition.

I was fascinated by the surface water treatment system. Everywhere I’ve been before, there has been access to groundwater and we simply needed to dig boreholes. In Renk, that isn’t possible: the only sources of water are the Nile River  and rainwater, and although there is plenty of water available from the Nile, it needs to be purified. The simple filtering system works well, but is only available to people who live close to the river.

What’s the economic situation related to food in South Sudan?

Most of the people I spoke with in Renk eat one meal per day, and that is usually sorghum, a grain that is quite nutritious and can be prepared like rice or as porridge. Sorghum is a staple food that is included in the general food distributions of the World Food Programme (WFP).

In the past year, prices for food and household items at the market have increased by 100% due to shortages and border closures. That alone gives a real indication of the day to day battle for families here in Renk.

Yak, one of Medair’s staff from Renk, invited me to visit his home. His wife told me that everything in the market is very expensive. Yak is the only one in his family who has a job. Each month he is supporting 15 people with his wages.

Tell us about meeting with the Care Group women who volunteer in their community.

The women welcomed me by singing songs – I was speechless and honoured. When they opened up and began to tell me about their lives, it was an eye- opener.

I asked who was able to send their children to school. Only a couple of women raised their hand. There were also very few who had been to school themselves.

I always struggle when confronted with inequality, whether it’s based on economics, race, or gender. This isn’t unique to South Sudan, but I definitely felt that the women carry such a burden in their families. I felt a real sense of the suffering within but also a pride and determination. After we talked, they asked me, ‘Now that we have told you our situation, what will you do about it?’ I could see they had to be bold; to speak up and advocate for themselves. The ladies also had a definite sense of humour and that laughter will stay with me!

I haven’t spent time with aid organisations before. I admit to having been a bit sceptical, assuming there were big salaries and fancy accommodations. But Medair, from my experience, impressed me very much. There is a clear vision and mission which is lived and breathed on the ground. The staff wear the Medair logo with pride.

Personally, the sacrifice that the international workers make by leaving home comforts to help make a difference is nothing short of heroic. At the same time, I can see the appeal of working with the welcoming and passionate local staff; it was a real privilege meeting them. 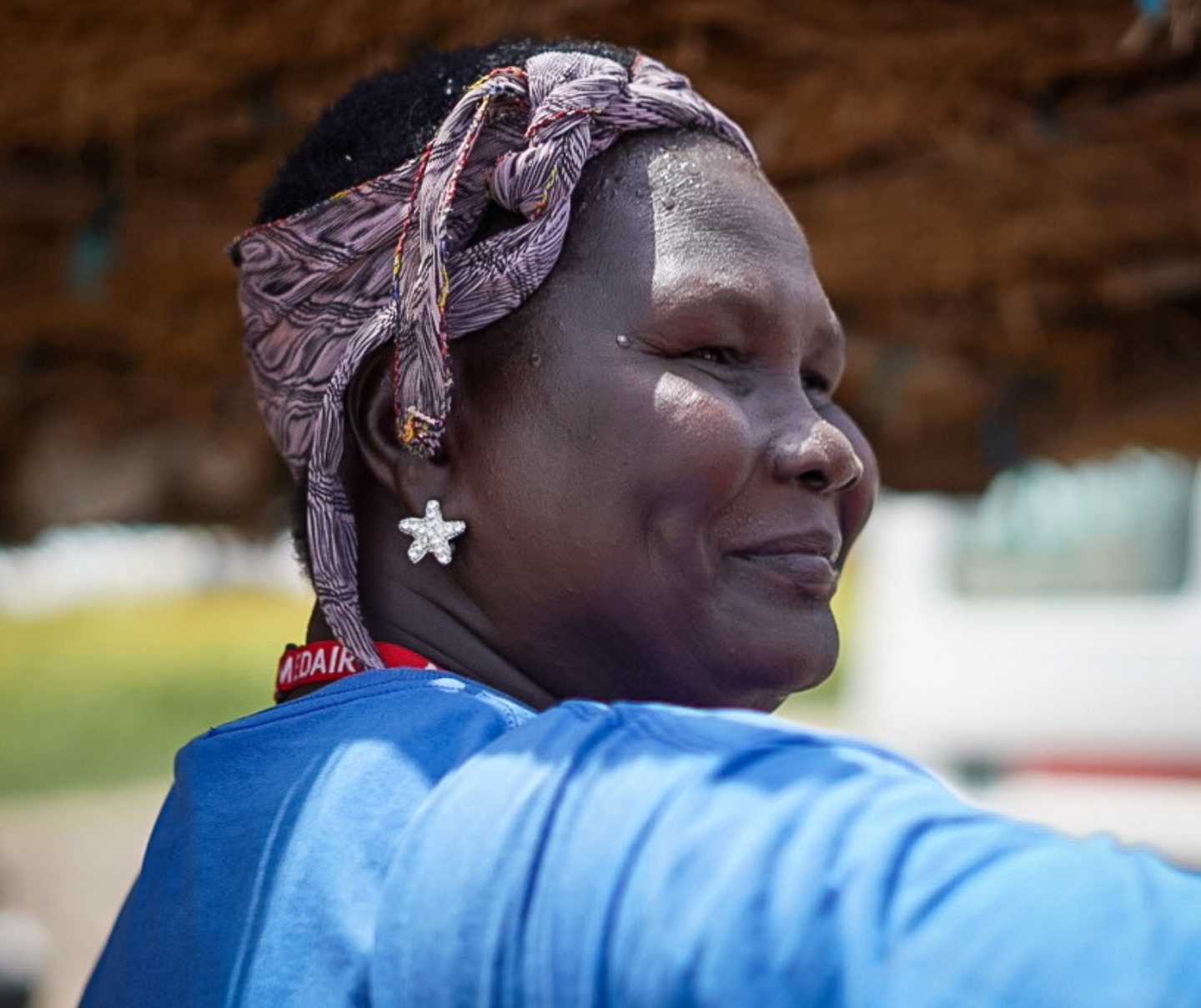 Which photo and experience impacted you the most and why?

This image makes me think of South Sudan. The gentleness of Jimmy examining a child in the Stabilisation Centre. I feel like this illustrates what South Sudan needs – care, patience, guidance, and friendship. Above all, peace and love.

Thanks for coming to South Sudan, Chris, and for dedicating so much of your life to helping others! By caring about our work you have encouraged our team and the communities you visited. We look forward to seeing you again in the field!