Returning To No Water

As the crisis enters its 11th year in Syria, a lot of areas have been declared safe for return. People returning find the homes they’ve once lived in dilapidated or demolished. This means families need to pool their resources to rebuild their homes.

A lot of families returned to areas where water systems are not functioning. They depend on unsafe or prohibitively expensive sources of water. As a result, families strictly monitor their water consumption to survive.

The economic situation in Syria plays a major role in the water crisis. Low incomes, and the shortage of electricity which affects water systems, limits access to safe drinking water.

An important aspect of Medair’s water and sanitation projects in Syria is providing houses with water tanks to store water. Medair spoke with community members about their challenging situation before owning a water tank, their struggles to cope, and how having a water tank changed their daily lives.

Mohammad is a father of three. He left his home when the crisis began and returned about a year ago. Mohammad is a daily worker; he takes whatever job he’s offered to provide for his family. His wife was a teacher before the crisis, and now she doesn’t have a stable job.

When Mohammad returned to his home with his family, their house was in deplorable condition and parts of it were destroyed.

“I used to fill water in two big plastic jugs that were previously used as detergent containers, along with smaller water jugs,” Mohammad told us when we asked him how they fulfilled their water needs before receiving the water tank. “I also relied on water trucks about three times a week, which is expensive for us, but there was no other option,” he added.

We asked Mohammad about the change this water tank made in his life.  “The water tank solved a problem for us. It came at the perfect time. I didn’t have the financial ability to buy one myself. You can live without electricity, and without many things, but water is essential, and you cannot give it up under any circumstance.”

“We don’t depend on water trucks any more since the amount of water we have now is enough, so this gift helped me and my family meet our daily needs without worrying about not having water.” 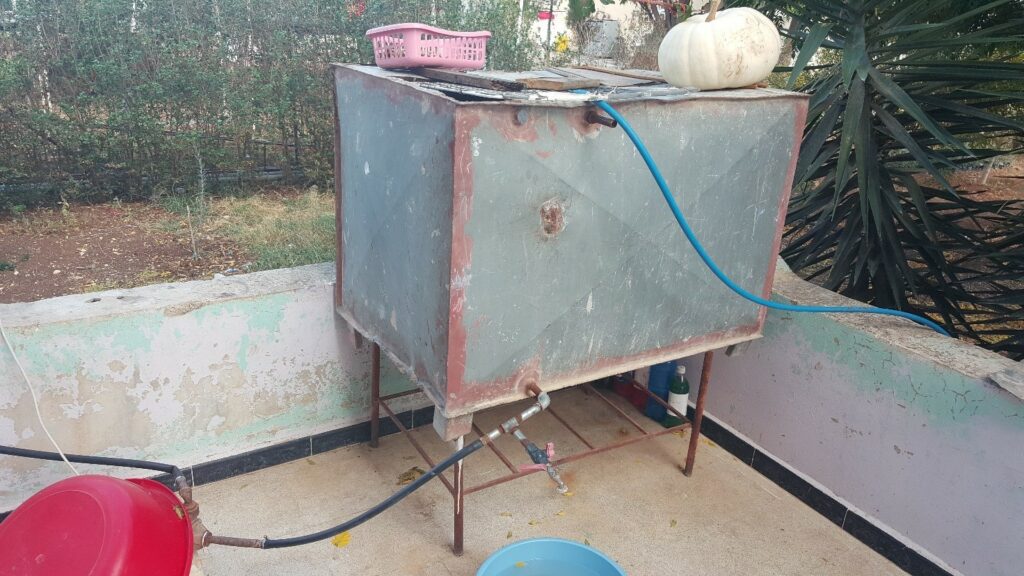 Yasser is 57-year-old. He left when the crisis began and returned about three years ago.

Yasser is a father of three, and he takes care of his aunt who’s 83 years old. His wife works for the ministry of health. Yasser used to work as an electrician but it’s hard for him to find any stable job since he returned home. This means he doesn’t have a stable income.

“I had a water tank when I moved back to my house, but water cuts were severe. I have a little tank that did not meet the needs of my family of six, especially with an elderly person. You need more water for washing clothes and showering.”

The main water line does not reach his area, and with the two water tanks he has, it’s less of a burden and he doesn’t have to rely on water trucks as much as before.

“The water line doesn’t reach my area. My neighbors and I had to extend an external pipeline that reaches about 14 houses. The pipe is about 3 centimeters in width, and 200 meters long, so the water takes forever to fill in the tanks. However, me and my neighbors are helping each other because we know the situation is bad for all of us. None of us can live without water, so we’re glad we at least have water.” Yasser told us about his way of coping with water shortage.

“I won’t lie. The water situation in my area is terrible, but I have benefited from the water tank. I am grateful for the help I received. It helps me to have water for longer periods since the water cuts a lot where I live,” he added. 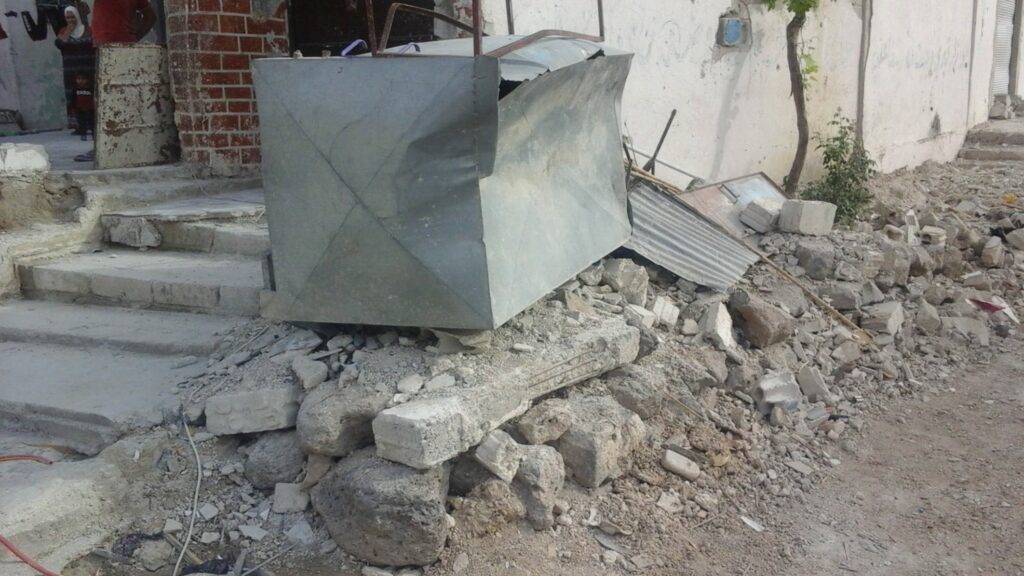 The photo shows how damaged the water tanks the families owned before the distribution.

Razan is 35, she’s a mother of four. She left with her family when the crisis began and returned once the situation stabilised about 4 years ago.

Razan told Medair how her family coped when they returned to their house: “When we returned, the house was destroyed, and we didn’t own a water tank. We talked to our neighbor so we can use his tank since he didn’t return to his home. The tank we owned was metal, it leaked water, and it was rusty. Even with that, we had no other option and no ability to buy a new one, so we fixed the leakage and used it for washing only.”

“We only had water for one day, then it cuts off for the rest of the week, so it was impossible for us not to buy from water trucks to fulfill our needs. My husband is a daily worker, and I don’t have a job. The price for each time we filled the tank from a truck was very high,” Razan shared with us.

“We used to depend on trucks before, but now we have a more sufficient amount of water since we have a big water tank, and the water is drinkable. It made our lives easier.”

“One thing I appreciated was the respect we were given. The team that came to register our names came to our house and saw our situation. They saw we needed the help, and I’m grateful for that.”

“Our home needed to be fixed. It was a wreck, so buying a water tank wasn’t a priority. We had to fix the house to the minimum so we could live in it. We couldn’t afford to buy a new tank; your help came at the right time for us.” 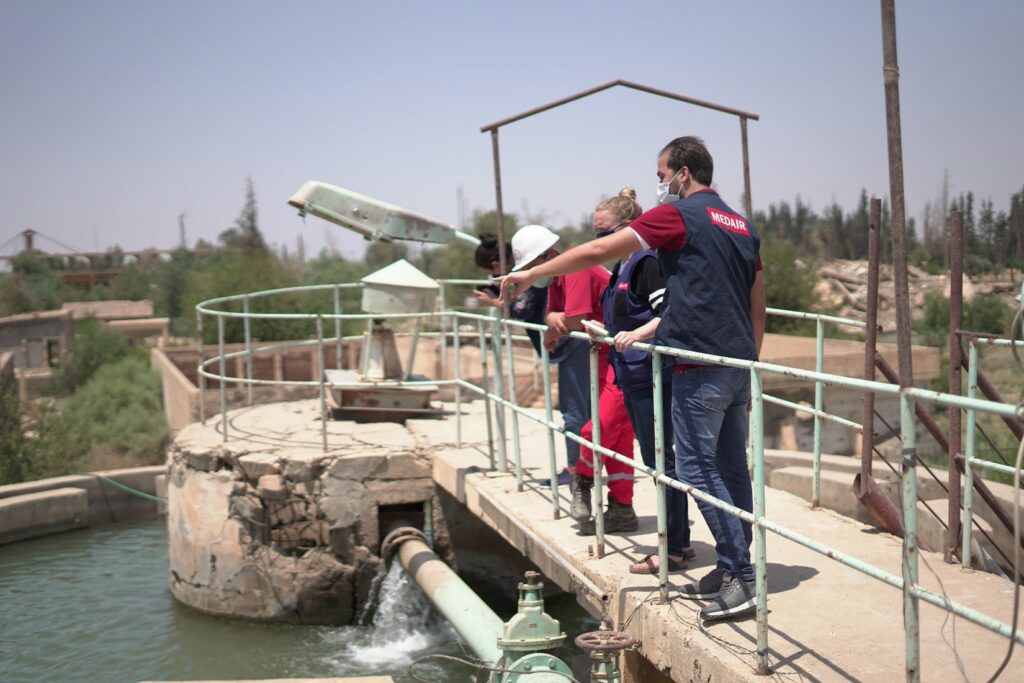 Checking the water station in Deir-ez-Zor before rehabilitation

Along with water tank distribution, the rehabilitation of water networks Medair has been doing in Syria has increased access to safe water for drinking, cooking, and washing, ultimately reducing the reliance on poor coping mechanisms, such as limiting water intake or drinking unsafe water. In addition, the increase in access to free and safe water lessens the financial burden on households who spend significant sums on water trucking.