A fast paced rhythm with high synthetics breaks the silence in the car as we head towards a refugee camp in Northern Iraq. The volume is low which makes it easier to tune out; my mind is lost in thoughts.

I’m thinking of the refugees I met as they crossed the border into Iraq, after the newfound crisis in North East Syria that began on 9 October 2019. It’s been one month since I accompanied Medair health teams who are responding to the health needs of incoming refugees.

I wonder how people are feeling now—how or if their viewpoints have shifted in the past month. I think of Sinu and Nijot, an elderly couple who approached me to ask if I would hear to what they had to share. It was an honour to listen. Their family of ten fled home when fighting reached their village. 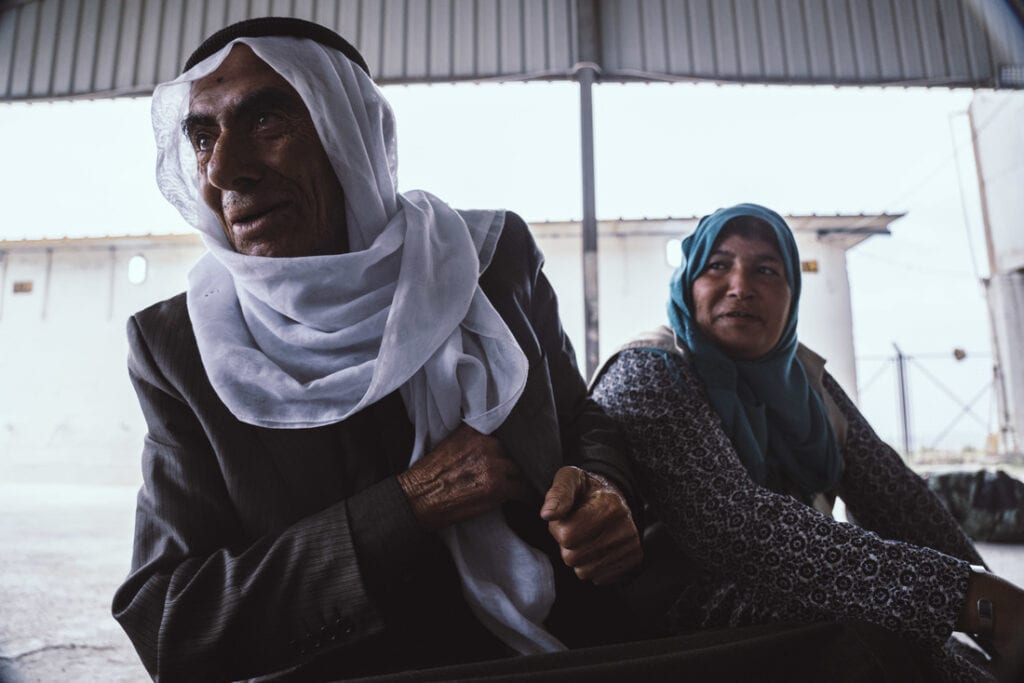 “We stayed a short while longer but as the bombing continued, we fled too. Our town may be destroyed but it’ll be rebuilt; life will continue. I just want everyone to be okay. People’s lives matter most. Perhaps our kids are somewhere here too but we don’t know.”

People’s lives matter most; I couldn’t agree more. I’m wondering if I’ll see Sinu and Nijot again, or any other familiar faces of those I met at the border in their transitional point of displacement. Had Sinu and Nijot been reunited with their children? What were the conditions of the camp? My mind continues a revolving door of questions.

I see tents in the distance and soon after, we arrive.

I step foot into Galiwan camp, where approximately 2,000 of the 16,380 (*now 20,056) refugees now reside, 170 kilometers east of the Iraqi Syrian border2. I have travelled from Mosul to meet Medair’s water and sanitation team as we to speak to people in the camp so we can determine how to meet their ongoing needs. But more so, we want to simply listen; to listen and show we care. 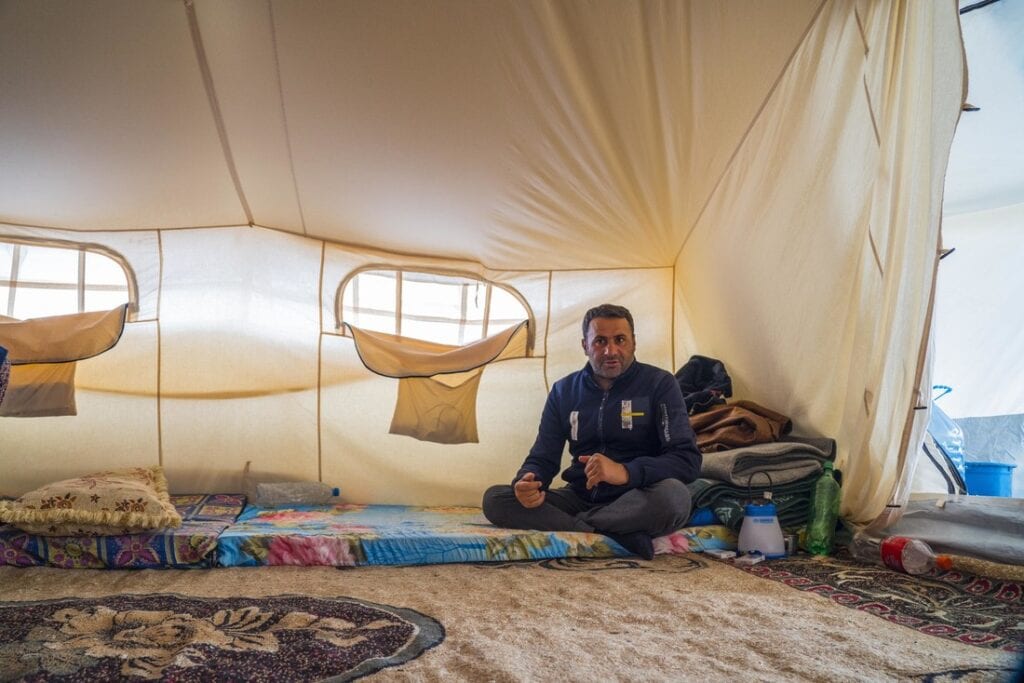 Shixar welcomed us into his newfound home – a tent his family of four had slept in for the past 16 days. Samia, Shixar’s wife entered shortly after with their two boys, Mohammed and Barzani.

Shixar began to share what life looked like before the crisis; their routine of waking up to prepare their kids for school and head to work. Both Shixar and Samia loved their life, their daily routine and their close community. They lived in a two-bedroom flat, a few doors down from Shixar’s parent’s home. Samia was a full-time teacher, just like her father once was and Shixar worked in a hospital. Then the fighting came.

They left home to a safer region where Shixar volunteered his services to aid those injured in armed clashes.

“For one week, we were debating if we should flee or not,” he said. Then, negotiations began and the ceasefire halted military action in Shixar’s area for three days. “Everyone was afraid and there was an opportunity to leave at the point. We had to just leave.”

As smugglers passed their family from car to car, in unfamiliar villages during the dead of night, the journey into the unknown was long, cold, and strenuous. At one point, they weren’t sure if they would see another day.
“When we arrived and we just sat down, exhausted. We knew we wouldn’t have to be afraid anymore; we were safe.”

Safety doesn’t equate to certainty, and it surely doesn’t mean the difficult times are in the past. “When we face challenges here [in the camp], life becomes dark in my eyes” Samia added. 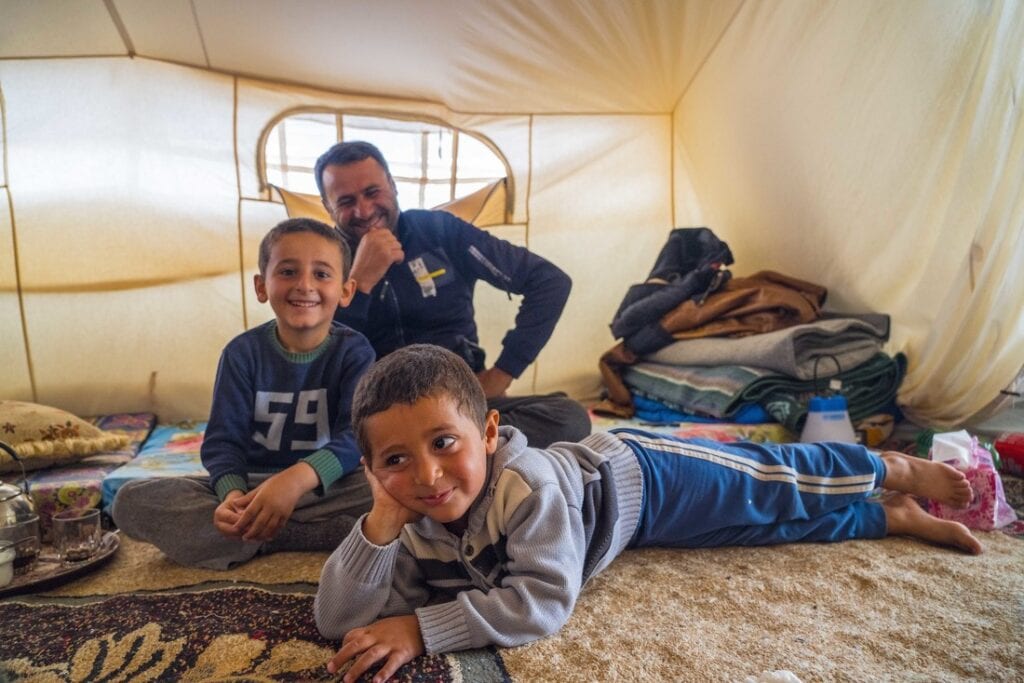 Their five-year-old son, Mohammed, began to recount memories of home; his friends at school and the nearby park where his family would spend the evenings. Shixar began to share more memories but couldn’t finish. I saw his eyes swell with tears, before I heard Samia’s quivery exhale. Her hands covered her face as she began to weep. Mohammed and Barzani’s eyes peered around, watching as everyone within the tent cried.

Mohammed placed his hand on my shoulder and offered a toothless smile. We sat in tears, in the midst of surrounding pain brought by this newfound crisis in Syria. My voice shook as I cried through words of consolation, though my words seemed so little in vain of the fresh and ongoing wounds.

We entered Shixar’s home as strangers and departed as friends. If there’s one notion that’s reinforced through my work everyday, it is this: our similarities are not so far apart. Our basic needs and desires are the same; to be loved, safe and secure. And just the same, none of us choose where we were born, or what we were born into. Barzani and Mohammed are both no older than five years old; and the crisis in Syria has outlived each of them. They didn’t choose to be displaced. No one would choose that. But we can choose how we respond—with open ears and open hearts because people’s lives matter most. 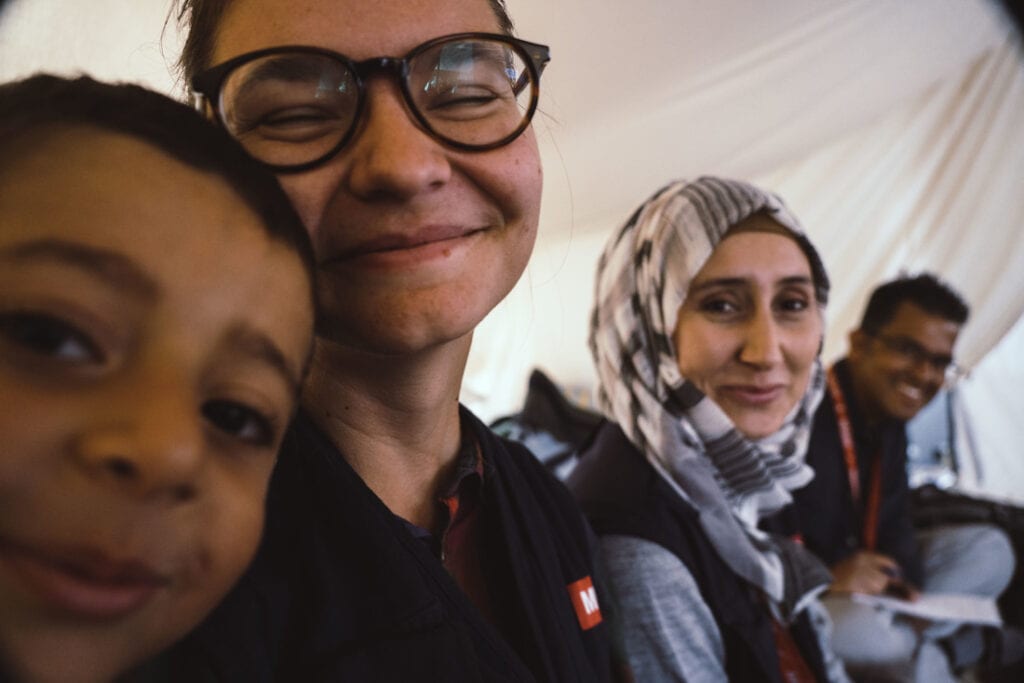 Bazani turns the camera to snap a photo of him with Medair teams.