“I am happy that my child will be fully healed. I can’t afford to lose another child due to sickness.” – Jeanne, a Congolese mother living in displacement.

Jeanne, brought her youngest child Shadrack to a health centre in Vilo, a remote village in eastern DR Congo, worried that he might be the second child that she would lose due to sickness. But after a few hours, her face glows as she sees her youngest child, Shadrack, beginning to recover from malaria. 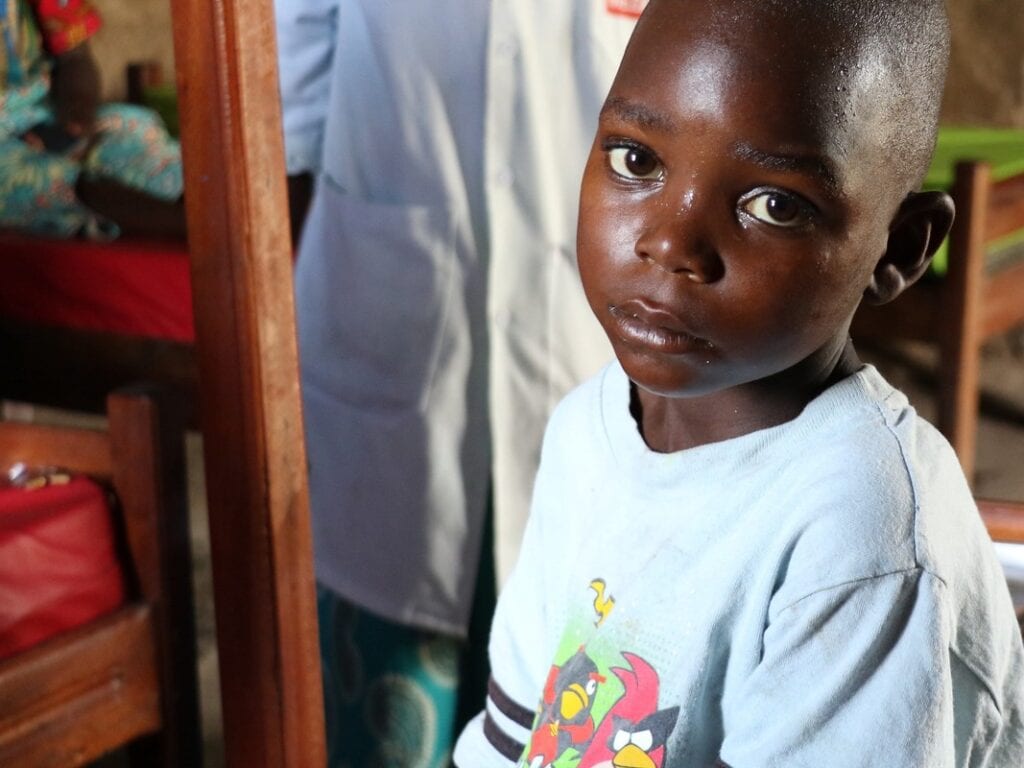 Shadrack, nine, recovers from malaria in a health center that Medair supports in eastern DR Congo.

Shadrack lies awake on a bed with a brown faux leather mattress. He has an IV tube attached to his tiny right hand; the fluid bag is hung on a wooden stand placed beside the bed. His face glistens with perspiration.

‘I was so worried. He was so weak with a high fever, vomiting, and sweating excessively,’ Jeanne says, speaking in her mother tongue. Rachel, a patient sitting in the bed next to Shadrack, translates to French: ‘His skin and lips were pale and eyelids heavy when they arrived this morning.’

Malaria is a life-threatening disease spread by mosquitoes. According to the World Health Organization, in 2019 there were 229 million cases of malaria, with 409,000 deaths worldwide.

Shadrack’s family have lived in a displacement camp since they fled their home several months ago. ‘We used to have a mosquito net at home, but we were not able to bring it when we fled our house,’ Jeanne says. Though heavily pregnant with her eleventh child, she works as a casual laborer at a farm near the camp to support the family.

The harsh conditions of living in displacement contribute to Shadrack and his family being much more vulnerable to malaria. They do not have ready access to water for bathing, nor proper sanitation facilities. They are also more likely to develop other common illnesses such as diarrhea and acute respiratory infections – than they would have been at home in their village.

Jeanne is grateful for the availability of a health centre providing free care close to the camp, meaning she doesn’t need to seek traditional remedies.

‘I feel relieved that he no longer looks pale. Shadrack’s brother died because we were not able to bring him to the hospital quickly enough. We had decided to carry him to the hospital, but he died the day before we were due to set off,’ Jeanne says.

Jeanne continues, now with a smile on her face: ‘I am happy that my child will be fully healed. I can’t afford to lose another child due to sickness.’

In remote areas of Ituri and North Kivu Provinces, DR Congo, most patients can only access health facilities by travelling several kilometers on foot, by bicycle, or by motorcycle. The terrain is varied, featuring hills, dense forest, and open savannah. Aside from the physical inaccessibility, financial constraints and insecurity are common barriers that prevent people from conflict-affected communities from accessing health care.

Medair services in the Ituri and North Kivu provinces of DR Congo are supported by the US Office for Foreign Disaster Assistance and private donors.