The landslides swept away everything

Cyclone Kenneth, the strongest ever to strike Mozambique, hit the northern coast of the country on 25 April 2019, not even six weeks after the previous devastating cyclone, Idai, had hit the central provinces on 14 March.

Cyclone Kenneth, the strongest ever to strike Mozambique, hit the northern coast of the country on 25 April 2019, not even six weeks after the previous devastating cyclone, Idai, had hit the central provinces on 14 March. The hours following Kenneth’s passage were confusing, just like those that followed Idai. It took a few days before the first information on the impact of the disaster was made public. Immediately after the cyclone, several humanitarian organisations present in Beira for the response to the previous cyclone began to reposition their staff and materials to the north. Medair sent a team to Pemba, the capital of the province of Capo Delgado.

A first assessment of the city of Pemba confirms what had emerged from the first reports: in Pemba, and unlike the northern coastal areas, the cyclone winds caused only minor damage. But the intense rains that have followed Kenneth threaten the population of this city of more than 200,000 inhabitants. “It’s been raining non-stop for five days,” says Ana, of Food for the Hungry. While driving through the city under incessant rain, Ana observed that neighbourhoods built on the lower part of the city along the coast have been completely flooded. The soil, saturated with water, no longer holds up and instead falls apart in landslides that sweep away entire neighbourhoods.

To better understand what happened, we decide to visit one of the centres set up by the national disaster response agency. During the cyclone and the rains that followed, people from these at-risk neighbourhoods took refuge in schools. But after days of relentless rain, the authorities decided to relocate these families to other centres to allow the schools to reopen. The largest hosting centre is called the 10th Congress, a building used by local authorities for meetings and conferences. When we arrive, dozens of barefoot children run towards me in the pouring rain. 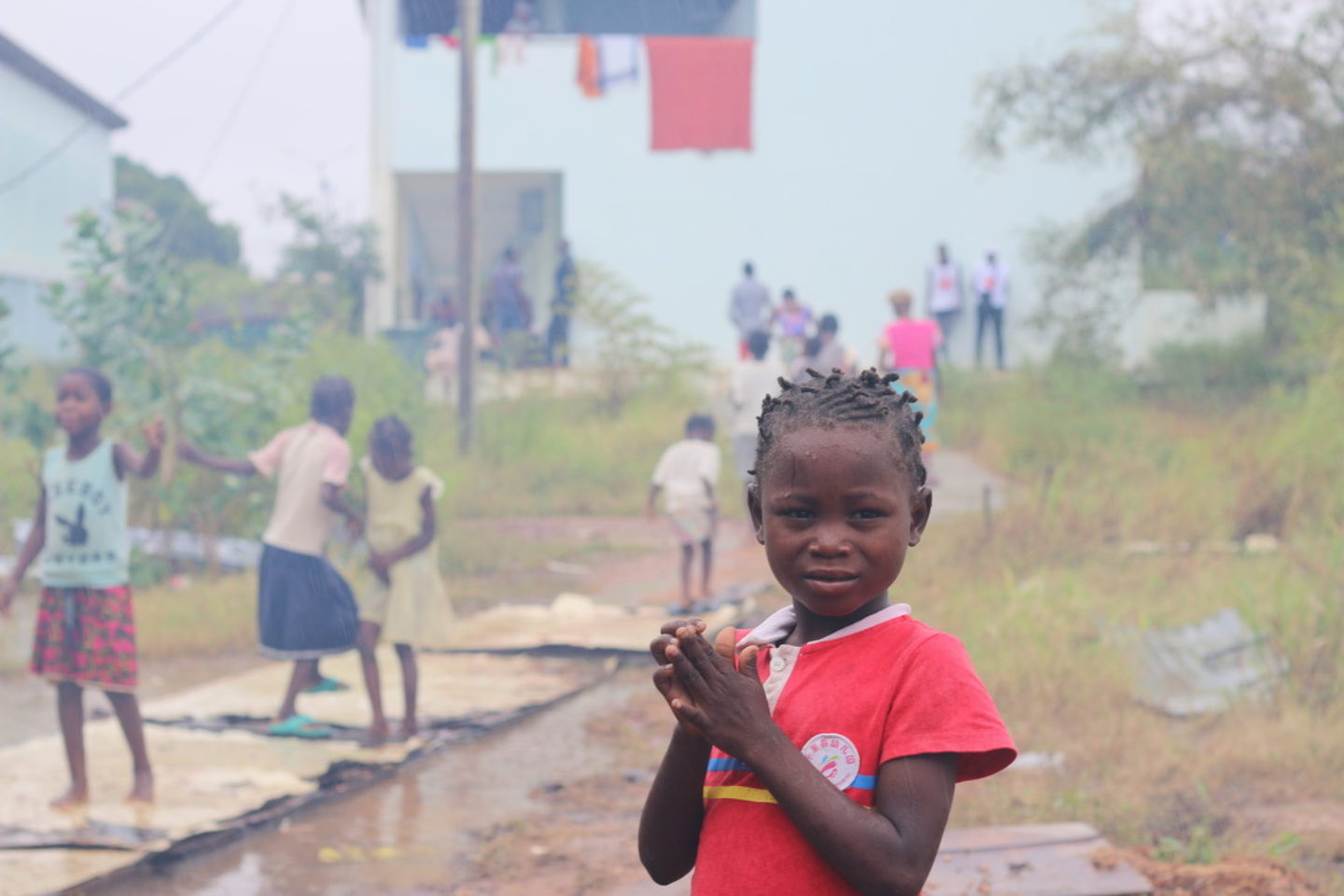 Celestina, 6 years old, stands in the rain in front of one of the accommodation centres set up in Pemba, Mozambique, on 20 April 2019.

Francisco, the centre director, takes a break from talking to an MSF team that is installing a water treatment system when we arrive . “Over the last week, we have received more than 800 people, and the number continues to increase by the hour,” he tells me. “We try to do everything possible. Each room now houses six families,” he says, showing me small rooms where people sleep on the floor. “People have nothing left,” he explains.

The people hosted at the 10th Congress are from two neighbourhoods or “bairros” of the city that have been particularly affected by the rains, floods, and landslides. Tina Mahando, from the Chibabari bairro, says, “We were frightened at the idea that a strong wind might sweep away our homes. They had warned us of the arrival of the cyclone. But when the wind arrived, we felt so relieved: it wasn’t so strong and our houses held up. We felt out of danger. But then the next day the rains began. The water started to fall hard, and then we heard a roar and we saw rivers of water and earth and “lingera” coming down the hill and sweeping it all away,” she said. (I asked several times what “lingera” means, but no one speaks English and despite my efforts in Portuguese, I could not find out the meaning of the word.) “We ran away—there was nothing else to do. We had to hurry so we didn’t have time to save anything. I took the babies in my arms and ran.” More than 130 families housed in this centre no longer have anything, “…no house, no clothes, no pots. Everything has been swept away,” Tina tells me. “We don’t know where to go. Here we feel safe, but it is a temporary situation. We don’t have another place to go, we can’t rebuild where we lived before, it’s not safe. Food is another thing that is lacking. The authorities do what they can, but the rations are not enough to feed everyone.” 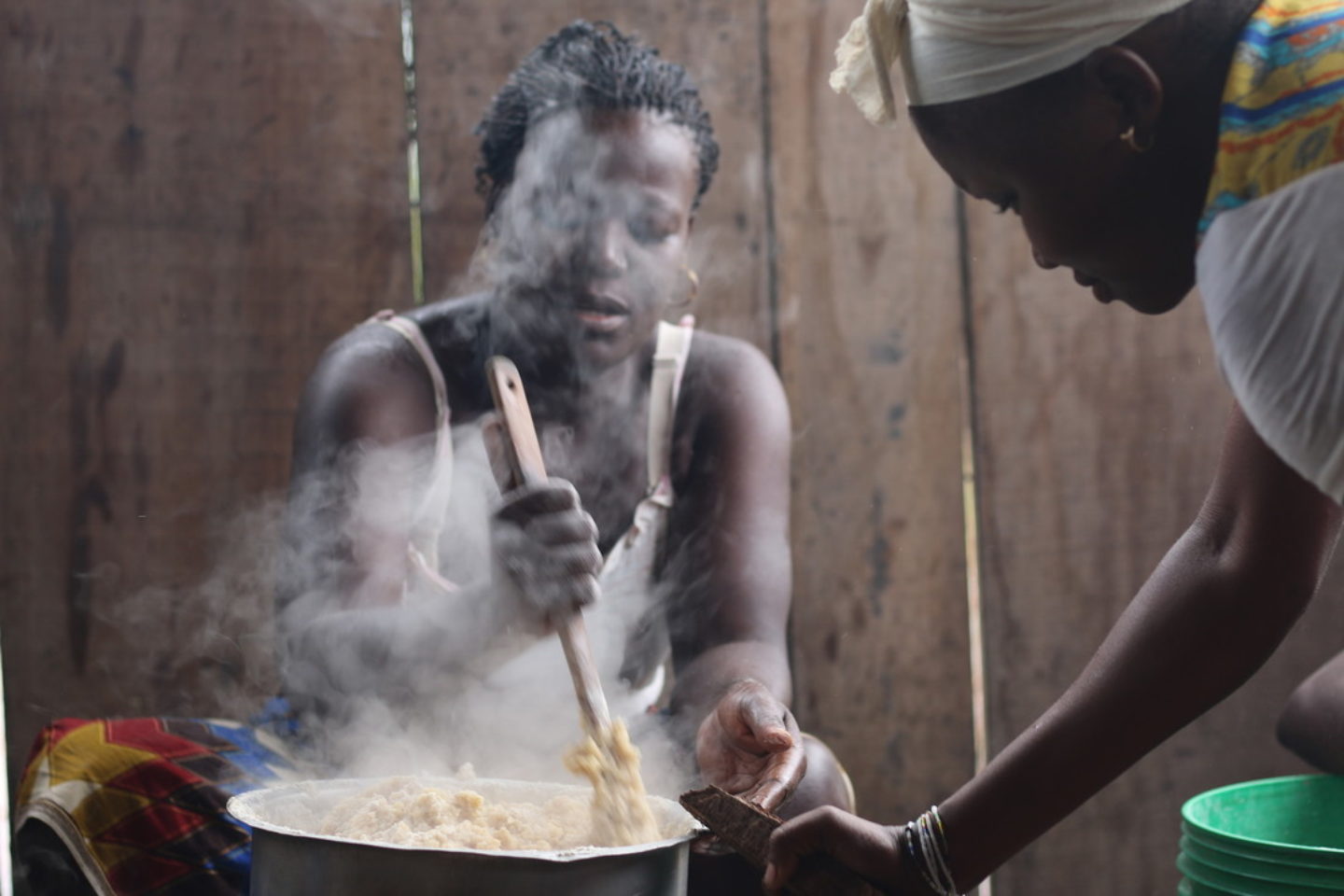 Tina Mahando prepares food for people staying at one of the accommodation centres set up in Pemba, Capo Delgado, Mozambique, on 30 April 2019.

To better understand what happened, I ask Ana if we can go visit the Chibabari bairro. Ana tells me that we cannot reach the district by car, but that we can try to walk. It is only when we climb up a narrow dirt road covered in rubbish that I begin to understand what the people of the centre were trying to explain. “Lingera, lingera”: garbage. The neighbourhood is built on the side of a hill that houses the largest city dump. The smell of rubbish soaked by the rain is terrible and the soil saturated with water acts like quicksand under our feet.

“I don’t think you should go any farther,” says a voice behind me. Seated beneath the porch of a mud and earth brick house, set between a mountain of rubbish and a wall of red earth soaked in water, Jose Abdul, 68, is originally from Quissanga. “I was living with my daughter a little farther down,” he explains, “but then the water arrived. Water everywhere! When I saw the house of our neighbour being dragged away by a river of water and waste, I realised that we had to escape. My daughter helped me just in time.” I realize that Jose cannot move easily: he is paraplegic and manages to pull himself up only with difficulty by levering on two wooden sticks that he uses as crutches. “All the people I know have escaped to the reception centre. But I can’t move.” For now, Jose and his daughter and nieces are being hosted by a family friend. “We don’t have enough food. And we don’t have a home anymore. Six people died here, trapped under the rubble when water destroyed their homes. I can’t rebuild a house here, it’s not safe,” he says.

Jose Abdul, 68 years old, in Chibabari bairro, Pemba, Mozambique, on 30 April 2019. The bairro has been severely affected by floods and landslides since Cyclone Kenneth.

Five days after Kenneth’s passage, the rain has not stopped and the terrible weather conditions are hampering humanitarian aid. According to the first aerial assessments to the north of Pemba, dozens of coastal villages and islands that were in the eye of the cyclones have been completely razed to the ground. Many are still inaccessible by road due to heavy rains and the collapse of bridges and roads. Air operations have been made impossible in the last hours by severe weather conditions. The coming weeks will be crucial for emergency aid to reach people like Jose who have seen their lives swept away in a few moments. “It’s a tough blow for our country,” Ana tells me. “Many people still have to recover after the passage of the Cyclone Idai. And now many others are affected by Kenneth. Our people are strong, but the needs are many. And without outside help, it will be very, very difficult to get up again.”