On 25 April 2015, Nepal was hit by its deadliest earthquake in a hundred years. Close to 9,000 people were killed, and entire regions were devastated. Panorama travelled to Dhobi, a Nepalese village on the borders of the Himalayas. Intimately connected to the earth, its Hindu and Buddhist inhabitants are still recovering.

On 25 April 2015, Nepal was hit by its deadliest earthquake in a hundred years. Close to 9,000 people were killed, and entire regions were devastated. Panorama travelled to Dhobi, a Nepalese village on the borders of the Himalayas. Intimately connected to the earth, its Hindu and Buddhist inhabitants are still recovering.

For Manisha, 14, memories of the disaster are painful: “When the earth began to shake, I was in my parents’ grocery store, next to their restaurant. My mother was cooking outside in the garden at the back of the house. My father was working abroad, so he wasn’t there, and my sister was asleep upstairs. I was terrified. My mother ran out to the road where I joined her.” Manisha’s sister was too petrified to leave the upstairs bedroom, however. “The houses were shaking, heavy boulders were coming loose and rolling down the mountains,” continues Manisha.

“The adults took refuge in the middle of the road. They crouched as if their legs couldn’t hold them up anymore. Manisha adds: “We spent the following year in a refugee camp.” The young girl is leaning against the entrance of the family restaurant, which has since reopened.

Due to the sliding of the Indian Plate beneath the Eurasian Plate, which formed the Himalayan mountains, Nepal is constantly threatened by a potential clash in the Earth’s core.

In 2015, everything collapsed. Some villagers were cut off from the rest of the world for weeks at a time. Dhobi is located two hundred kilometres,  from Mount Everest, and one day’s travel from Katmandu. 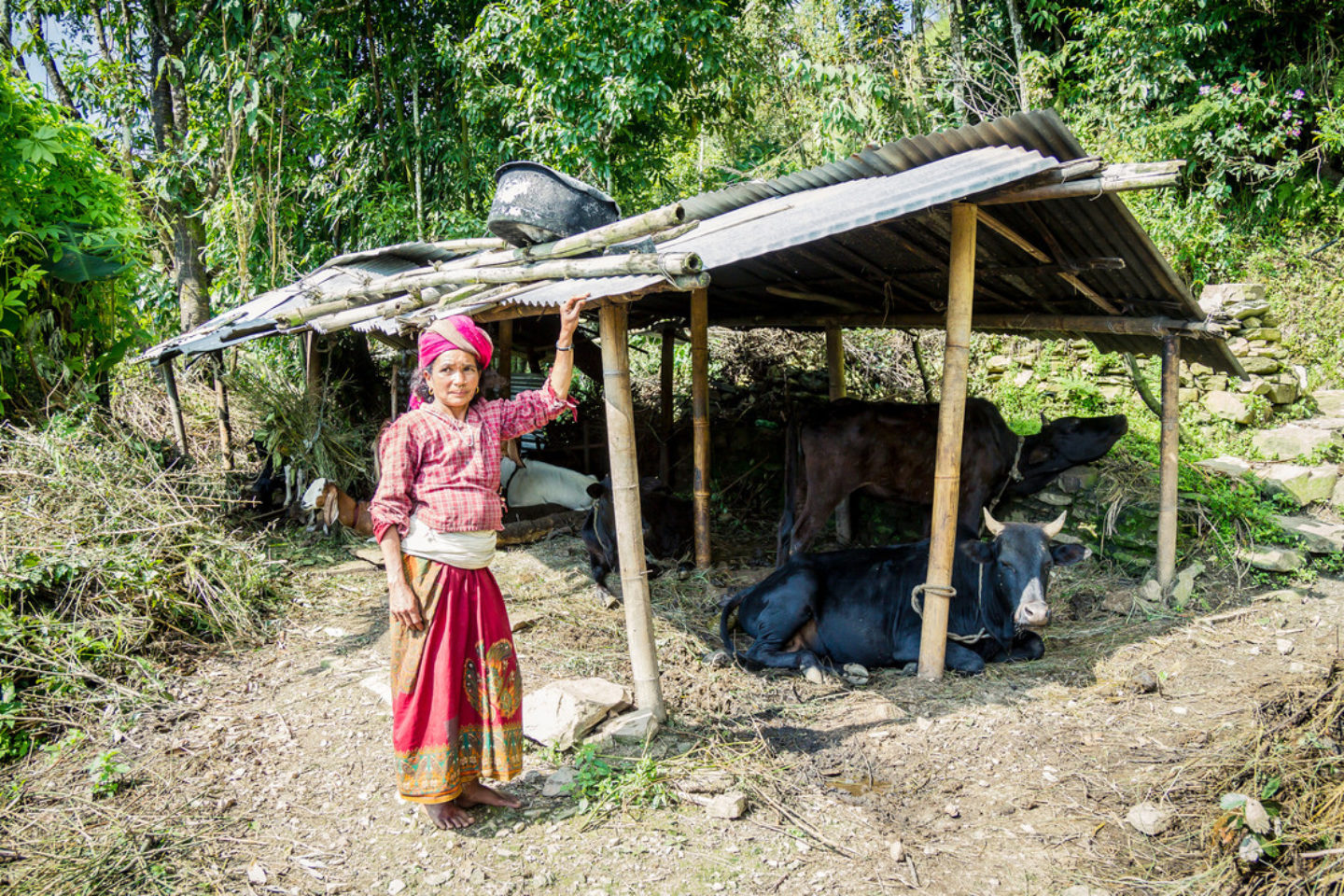 The word “dhobi”, after which this village in the Ramechhap district was named, formally referred to the king’s slave, “the man who does laundry.” Dhobi remains a very poor hamlet, where Buddhist and Hindu communities have been living together for centuries. Owning two cows is a sign of wealth here. In the rest of the country, it would be a symbol of poverty.

The financial help provided to each household by the government in the aftermath of the earthquake came to approximately 2,600 euros, a sum which covers half the cost of building a house that is earthquake resistant. The rest was covered by humanitarian aid. In Dhobi, the Swiss NGO Medair carried out this mission. On the day after the earthquake, they recruited a dozen young Nepalese engineers to rebuild, along with the inhabitants, 1,296 houses in the valley.

Kripa, 28, is part of that team of engineers who came from across the entire country. “We are proud to see these blue roofs growing like flowers ” she says. “We trained the villagers in masonry work. They don’t know how to read, but they want to learn. They understand how important it is to send their children to school after they finish their work in the fields.

Dhobi’s villagers have pioneered surprising changes since 2015. The traditional castes made peace with the Dalits, the “impure”, also known as the “untouchables”. The Dalits were able to work as masons and to receive compensation for their work like any other villager, despite having been treated like slaves for generations. Another miracle happened: many Nepalese workers, who had left the country to go work in the Gulf countries in order to send money to their families, returned to Dhobi to help rebuild their village.

“Hope often arises from disaster, doesn’t it?” says Kripa with a smile. “We had to survive, that’s why all the communities came together, irrespective of their social status. This culture of mutual assistance is called ‘Arma parma.’ I’m happy to have helped rebuild Dhobi, to have contributed, however modestly, to the history of my country.”

“The entire village got to work!” exclaims Kul Bahadur Magar who, despite being blind, is busy this morning building his 39th house near a mountain trail. “I choose stones by feeling them with my fingers. I’m not going to sit and pray… I need to feel useful to my community.”

Meanwhile, at dawn Back in Dhobi’s restaurant, it’s a new day and Anisha sits drawing in pencil on a sheet of squared paper: a house, a tree, and in the distance, the mountains beneath the rising sun. “The sun always rises and sets in the middle of the mountains,” she explains. She closes her notebook with her hennaed hands. Outside, the daylight reaches the Thumka Dada mountain. The morning workers have started work. The noise of their hammers replaces the crowing of the roosters, like the promise of a new beginning.

Thanks to the generous financial support from donors like you, 1,300 families have received a new, earthquake-resilient home following the devastating earthquakes in 2015. More than 600 local construction workers have been trained in earthquake-resilient building techniques. This leaves a lasting impact because with this knowledge, communities can build safer homes that will protect them better against future disasters.