Beyond conflict and suffering

When I walk into the Medair clinic, I notice her right away. The young mother sits silently on one of the beds. Her one-year-old daughter is sleeping close to her, covered under a beautifully coloured cloth. I walk up to her, together with two other colleagues. We start talking and she tells us that she has walked for hours to get to our clinic. Her daughter became weaker and weaker. As a mother, she had no choice but to undertake the long journey by foot, carrying her daughter. 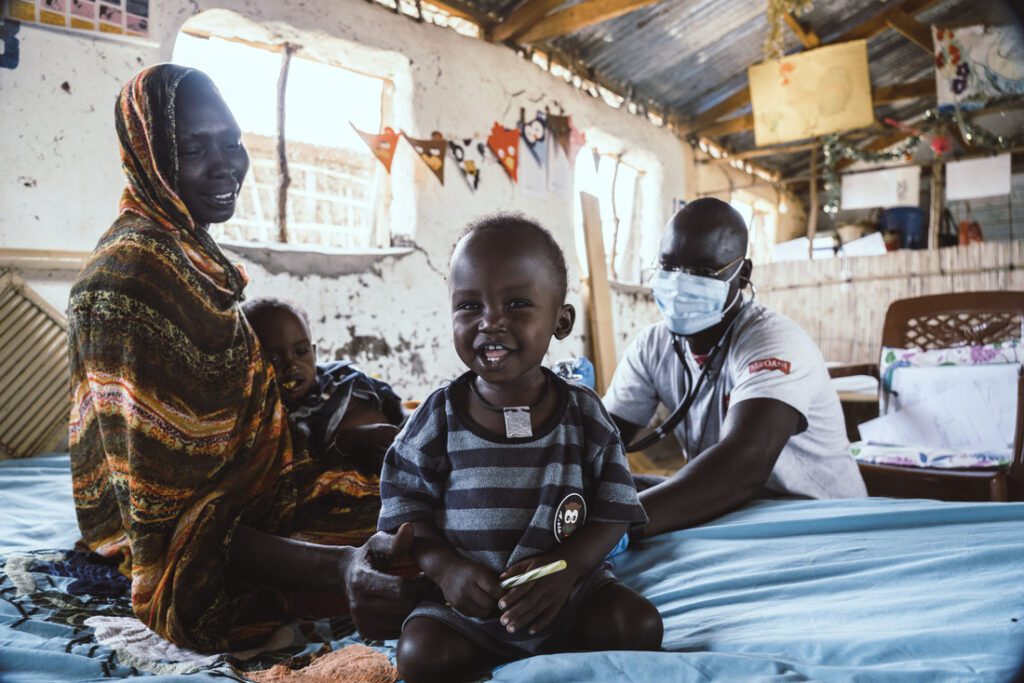 A mother and her child in a Medair nutrition clinic. ©Medair/Amy van Drunen

The story of this mother touches me. The lack of adequate healthcare in this country and the high levels of malnutrition that affects so many children is downright heartbreaking. At the same time, this mother shows so much love and care for her child. The roads leading up to the town where our clinic is located come with several dangers – most certainly for a young woman. Still, she did take that risk. While many people living in these circumstances often have no choice but to move on and most likely accept some of the dangers, I can’t help but admire her courage.

After our visit to the clinic, we walk back to our base. As we cross the runway, we notice a large group of people, surrounding a helicopter. People laugh, clap and dance. When I ask a man what’s going on, he responds: “Our children have been brought back.” Later that day, a colleague tells me that a number of children were kidnapped from the community last year. After many months, they are now finally back. This is a special moment. Observing the community being so happy and eagerly awaiting their children is incredibly beautiful.

What do you think when you hear about South Sudan? War, hunger, infant mortality, and disease outbreaks?

If yes, you are right. But not entirely. Fighting and conflict are certainly no exception in some areas. Many people in South Sudan only eat one meal a day. The number of malnourished and sick children and mothers we treat in our clinics is often high.

But that does not tell the full story. South Sudan is more than the images of insecurity, poverty and suffering that appear on television every so often.

My time in South Sudan will soon be over. As the end of my contract nears, I regularly think about the people I have met.

I remember Rebecca, a mother of eight. With her 40 years, she has suffered loss unlike any other. Her husband passed away a long time ago. Being a widow, she had to look after her eight children all by herself. She was strong and pressed through. But sadly, much more bereavement was awaiting her. In the years that followed, she lost three of her children. With the death of her children, eight of her grandchildren became orphans and there was no one who could look after them. Rebecca decided to take care of all her grandchildren. Without any income, she tries to find enough food for her grandchildren every day. Some days it works, but on other days it doesn’t. During our conversation I asked Rebecca what her hopes are for the future. With a gentle but clear voice, she replied, “My hope is that all people will find God. That there is peace in South Sudan. And that my grandchildren can go to school.”

Her story brings tears to my eyes. The love of this grandmother for her grandchildren and her hope for the future are so powerful.

I am also thinking about my South Sudanese colleagues. Recently, I shared a tent with a colleague who works in a Medair nutrition clinic. Early in the morning, as soon as she woke up, I often overheard her calling the clinic to ask how the children had been doing during the night and whether they were showing any signs of improvement. Some days, at the end of the day, she would come back from the clinic looking defeated. The health of one of the children had become worse. On other days, she often returned cheerfully. One or more of the children had been discharged from the clinic. Never, will I forget her passion and care for these young, vulnerable children.

Once I have left South Sudan, it will mainly be my memories of the strong South Sudanese that will shape my image of this country. Yes, pain, grief and violence are very much present. Those too remain in my memory. A South Sudanese once told me: “We were born in crisis, we grew up in crisis, and my children will grow up in crisis too.” The situation in South Sudan is complex and could at times seem hopeless. At the same time, this country is so much more than that. My colleagues, Rebecca and the many other people show this on daily basis. It may not be what we see on the news. Yet, these are the people who eventually are writing the full story of South Sudan. At least, for me.