Because of the mountain, we survived

Aishan, a 52-year-old widow, motioned for us to sit down after we entered her uncle’s home in a village south of Sinjar town. There were two cushioned mats, typical in homes within the region. One mat lay along the exterior wall, and the other directly across from it.

Aishan, a 52-year-old widow, motioned for us to sit down after we entered her uncle’s home in a village south of Sinjar town. There were two cushioned mats, typical in homes within the region. One mat lay along the exterior wall, and the other directly across from it. The light hit the wall beautifully, and so I chose to sit across from that, with future photos in mind. Aishan thought otherwise; she was thinking about the comfort of her guests, as the other spot had back support while sitting. Aishan insisted that we move, and it would have been impolite not to accept, so my colleague Sarah and I sat where she directed.

As Aishan began to speak, three other women approached: Gaware, who used a cane; Sara, who wore glasses; and Aldo, who we’d soon learn was hard of hearing. I wondered how far they had walked today, and felt bad that they had made the journey to their neighbour’s home because we were there.

I wish we could have been the ones to travel to their homes; they wanted to share their stories, talk with us, and I am grateful for the opportunity. The women had spunk—three of them got married on the same day; between the four of them, their friendship was deep-rooted. 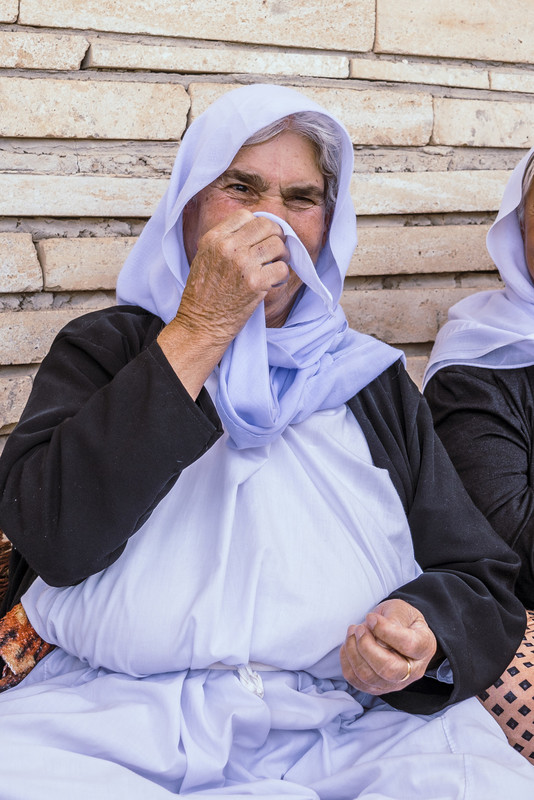 One by one, the women shared their experiences, the way their town was prior to the crisis, about their families, and what they want for the future.

On 3 August 2014, armed fighters encircled their town and the entire Sinjar district. The attack came as a surprise to many, and within moments, families fled their homes. The streets bustled with people piled into overpacked cars, people weaving through and along traffic en route to Sinjar Mountain.

“We reached the hills by vehicle and had to walk when the vehicle couldn’t reach further,” shares Aishan. Cars were abandoned along the switchbacks leading to the mountaintop, which forced everyone behind to abandon their cars as well. “Our feet were swollen. We stayed for eight days on the mountain. No food, no shelter.” Aishan and Gaware demonstrated how they used their scarves to filter water to avoid drinking little red worms in their single bottle. They were trapped. Armed fighters had surrounded the mountain. “Sinjar Mountain protected us, as well as many Yazidis. Because of the mountain, we survived,” says Sara.

After eight days, Aishan, Gaware, and Sara travelled with their families through a newly opened humanitarian corridor to Syria, trekking north until they could pass back into a safer region of northern Iraq. “I am old and suffered a lot—thirsty, hungry, and unable to walk well. I wouldn’t have been able to manage, but it was fear that kept us going,” shared Sara.

Aldo stayed behind on Sinjar Mountain, weak from the journey. At age 67, Aldo has a hard time hearing. ‘What’d he say?’ asked Aldo, after our colleague Riyadh translated our questions. He spoke more loudly, and again ‘what’d he say?’ So Aishan spoke loudly into her ear as she began recounting moments en route to Sinjar Mountain: the time she fell and strangers helped her walk to safety, the time a soldier on the mountain gave her food, which in turn gave her hope to continue. When she finally arrived in northern Iraq, she was hospitalised for malnutrition.

Since the crisis in 2014, Aishan, Gaware, Aldo, and Sara have returned to their home village—a town formerly known for its greenery and abundance of olives. Today, burnt reminders of the crisis mark the fields—armed groups had set the trees on fire when they seized their town.

As people in Iraq return to homes in areas previously held by armed groups, they are encountering extensive damage, a lack of basic services, and a loss of their usual livelihoods; when families fled, livestock they left behind was taken by others and their homes were looted and burned in their absence.

Through house-to-house assessments and working with community leaders, Medair is identifying the most vulnerable households to receive cash transfers of USD 400 per month for three months.
In areas where markets are open, multipurpose cash assistance is a cost-effective way to help people cover their basic needs with the utmost in flexibility and dignity. Each household receives a mobile SIM card and is sent a text message when the cash is available to be picked up at locations operated by the mobile money partner.

Families receiving the cash assistance are generally female-headed households or families where people have significant health issues or disabilities. In this particular community, many people were farmers or sheep herders before the crisis.
In our meeting, Gaware shared, “People are in need and we’re motivated to share our experiences and our needs on behalf of the community. We want things to return to before and for people to feel comfortable. We want to live with dignity again.” Aldo added, “We want to live together again.” Before the crisis began, the area was home to approximately 100 families. Today only 30 households have been able to return to the area.