Simon was living alone on the edge of the village. He worked by himself on building his tukul away from his family, gathering long grasses to prepare the roof. He stopped cutting his hair and was doing his own cooking. Each day he walked to the borehole to collect water and could sometimes be seen talking to himself.

Simon lives in Unity State, South Sudan, where recurring conflict and brutal violence have caused people to flee for their safety several times. As recently as mid-2018 people saw their homes burned, witnessed the killing of family members and destruction of livelihoods, and experienced rape and abduction.

In some places his isolation would go unnoticed, but in South Sudan’s social, community-based culture, Simon’s behaviour was unusual. Young men generally stay with their families until marriage, communities come together to build the traditional houses, and men keep their heads closely shaved.

James Gatguok, a Psychosocial Support Assistant with Medair who lived in Simon’s village, began to visit Simon while he worked on his tukul. Together the men straightened the poles and tied them tightly. After several visits, James was able to talk to Simon about visiting Medair’s health clinic but the man declined, insisting that he wasn’t ill. 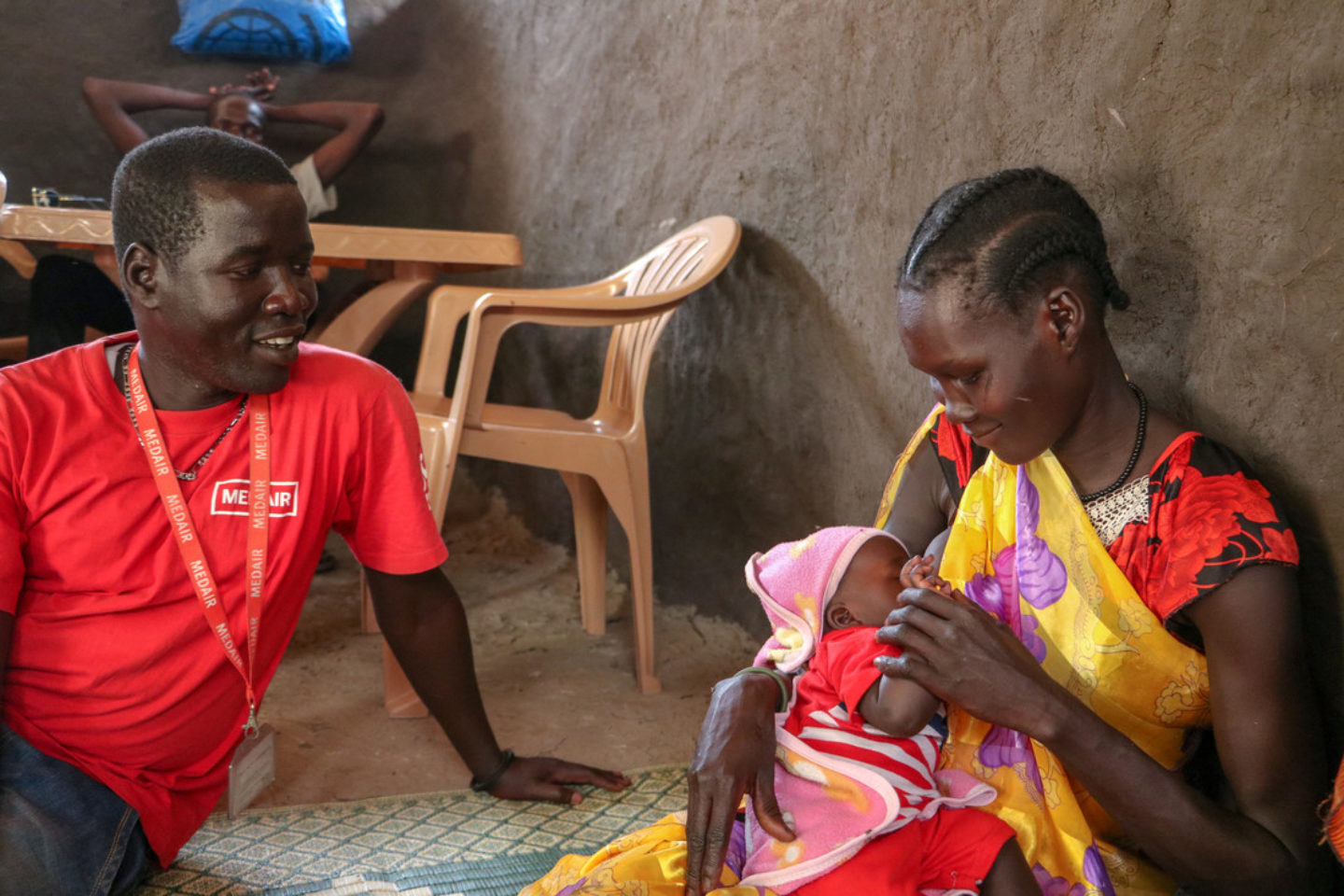 Michael, a nutrition officer, talks with a woman whose baby is receiving treatment in Unity State, South Sudan. Delivering all services in a way that promotes mental health and social well-being is part of helping communities recover from emergencies.

Riёt Kroeze, Senior Mental Health and Psychosocial Support Advisor (MHPSS) for Medair, says that while meeting basic needs is critical, there is more to consider.

“When we assess the impact of an emergency, if we are not looking at the mental health of the population, our response will be incomplete,” says Riёt. In fact every humanitarian aid action can incorporate a psychosocial approach.”

Even in contexts where specialised services are limited or non-existent, humanitarian agencies can provide care suitable for the majority of people.

“Violence, fear, and uncertainty create chaos, and lacking the basics of life affects people emotionally, but not everyone is impacted in the same way,” says Riёt. “There are several mental health and psychosocial activities that can be implemented in humanitarian settings; each one adapted to the culture and the needs of the community.”

Restoring support structures and creating awareness around positive coping mechanisms can be all the support some people need to maintain mental and psychosocial well-being. Care Groups, parenting support, and cultural activities can have a profound impact on helping a community recover from shock.

In South Sudan, where mental health support is relatively unknown and specialised services are very limited, local health staff are trained in delivering MHPSS services. A standardised clinical decision-making process has been developed by the World Health Organisation (WHO). The practical tool guides the assessment and management of mental, neurological and substance use conditions, specifically for areas affected by humanitarian emergencies.

To support Simon in South Sudan, James Puoch, a Psychosocial Support Officer for Medair, made a point of going to the borehole.

“Because James Gatguok had visited him every evening to help with building the tukul, we learned that Simon had lost many people,” said James Puoch. “He didn’t trust anyone. Finally when I met him at the borehole, he agreed to come to the clinic.” Simon was assessed by a Medair health worker, and received treatment for psychosis. After the treatment began, James Gatguok maintained contact with Simon.

“Initially we talked to him daily and, over time, he began to behave more like his former self. He even asked James Gatguok to shave his head for him!” says James. Simon has since been able to rejoin his community. “If you see him now, he is talking to people and he visits the market. He is looking to get married now!” 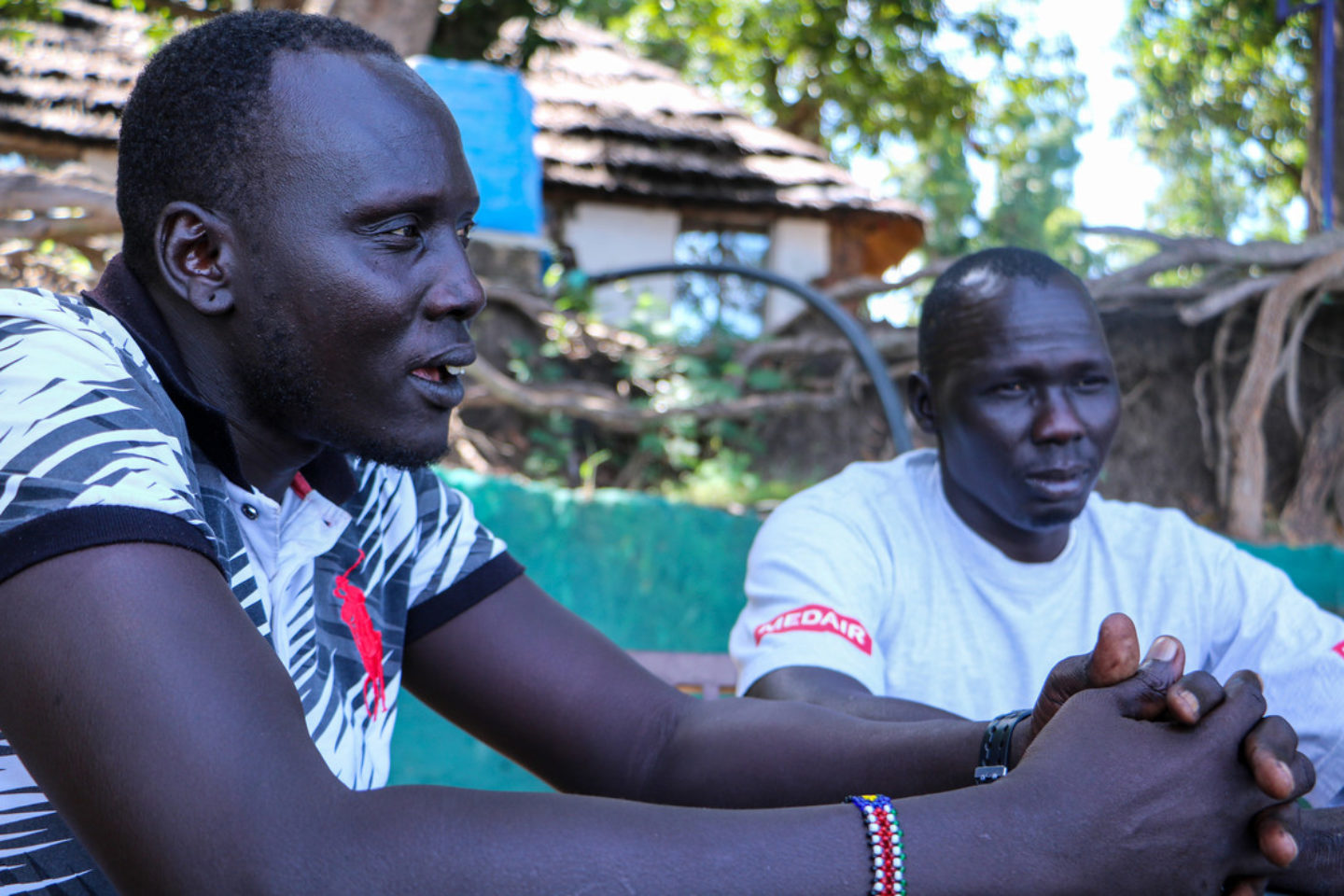 “This programme is new, even for us,” says Medair’s James Puoch in South Sudan. “We see the benefit; people are saying their lives are being changed. There has been so much suffering in our area and Medair is the first to offer this type of programme here.”

“During emergencies, people with pre-existing conditions are particularly vulnerable; not only because of the stress of the crisis but also due to the interruption in supply of medications for neurological conditions,” says Riёt.

In South Sudan most health services were interrupted when conflict began in 2013. In Unity State people have been dispersed and are sometimes living in the bush areas outside of villages. Working in small teams, Medair MHPSS staff provide services in borrowed spaces or even under shade trees. Word spreads quickly that help is available.

“People needing treatment for epilepsy are walking long distances to reach us when they know that medications are available,” says Natalie Page, Medair’s Health Advisor for South Sudan. “They have gone years without treatment; some have never been officially diagnosed. Our staff have assessed and managed many cases of epilepsy. Finally these people are free from the convulsions and resulting injuries.”

A woman with heavy scarring and contractures in her hands said she had been burned multiple times from falling in the cooking fire while convulsing. She was given medication for her epilepsy and when she returned to refill her supply, the MHPSS staff reminded her not to share the medicine.

“She seemed shocked even at the suggestion,” says Natalie. “She said ‘This has changed my life, why would I share it? I’m going to take it myself!’”

One woman reported that she hadn’t slept properly in years. As she watched over her little girl, she worried that she would have an epileptic seizure during the night. Finally, after receiving medication and knowing that the seizures had stopped, she was able to sleep through the night.

From the very beginning of a response, even when addressing the most basic needs of any population, every humanitarian sector can accommodate the psychosocial impacts of emergencies. Community-based and participatory approaches, ensuring equity of care and access, systemic, inclusive assessment of needs, and a multi-layered approach improve the societal impact of any action.

“When dealing with any emergency, you need to provide for the basic needs – restoring health care, ensuring access to clean water for example – but if you’re not also addressing the emotions of the population, it will be difficult to rebuild the community,” says Riёt. “You cannot expect people to rebuild a broken community with a broken mind.”